A Rush to Sunset 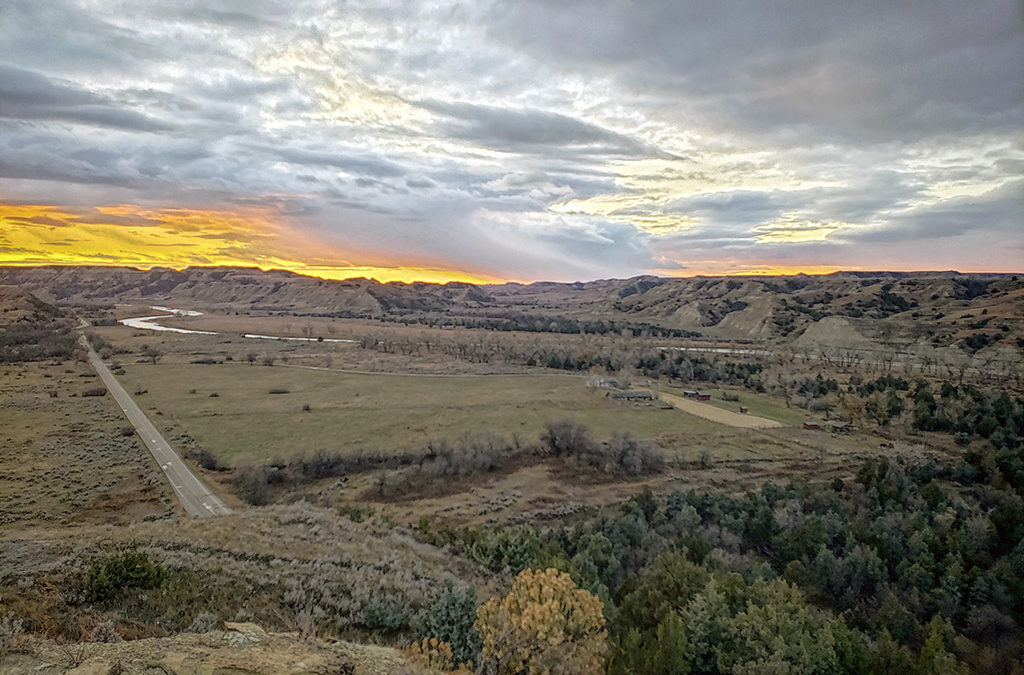 A Gloomy Day Reverses Itself

We found out what happens if you wait until the last minute to catch a badlands sunset.  You might miss it, or you might get a rewarding glimpse like we did.

It was a cold November evening. Was it still daylight? It was hard to tell by the light outside. The darkness seemed to be like a hangover from Halloween the day before.

Like a Hollywood star hiding from the paparazzi, the sun made almost no full appearance all day.  In fact, there were a couple of seconds when the sun winked at us. But only a couple winks.

A little dusting of snow at daybreak had long melted. 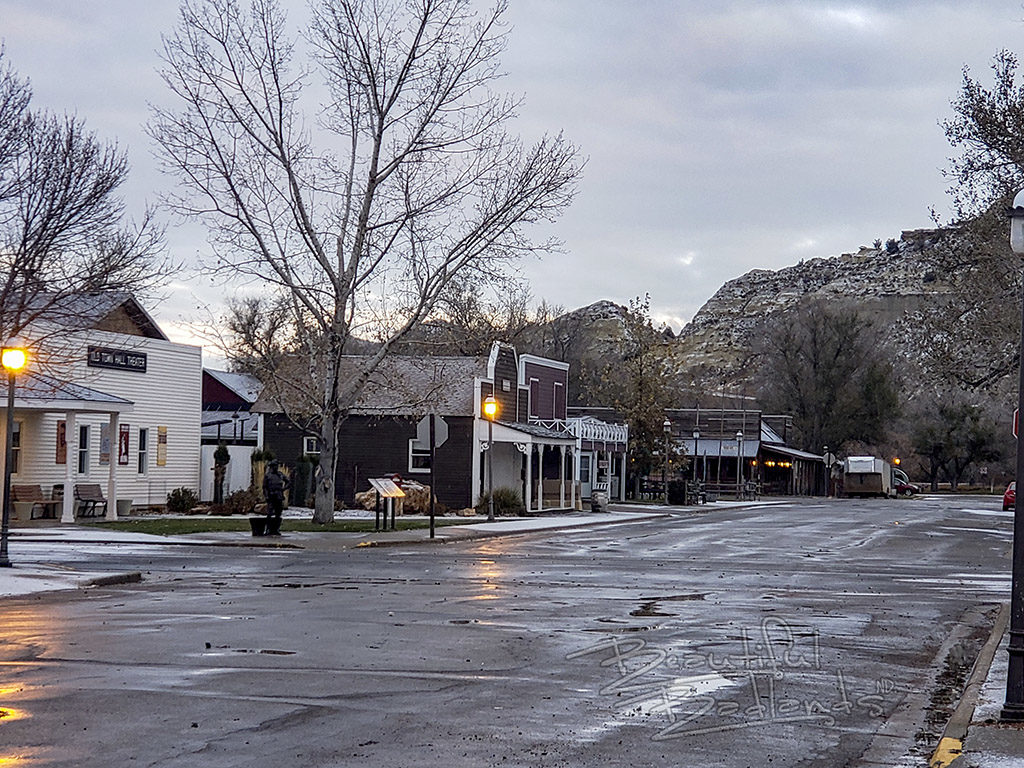 The day started heavy and hadn’t lightened up all day. Maybe at sunset.

A Search for Evening Light

“Let’s see what happens. We can go back to that same spot as last night,” I suggested.  One day ago, the light was brighter. We followed a short term habit we’ve started — finding a high point at the end of the day to shoot the golden hour, and sunset.

“Yeah, that’d be good. Maybe we can get up on one of those hills to see what’s around.” she agreed.

A slow 30 mile an hour drive took us to a parking spot at the lower corner of a massive prairie dog town.  “Looks cold out there.”

I agreed with her, “Yeah, I didn’t put on long johns, and I just have this jacket. But I think it will do.” 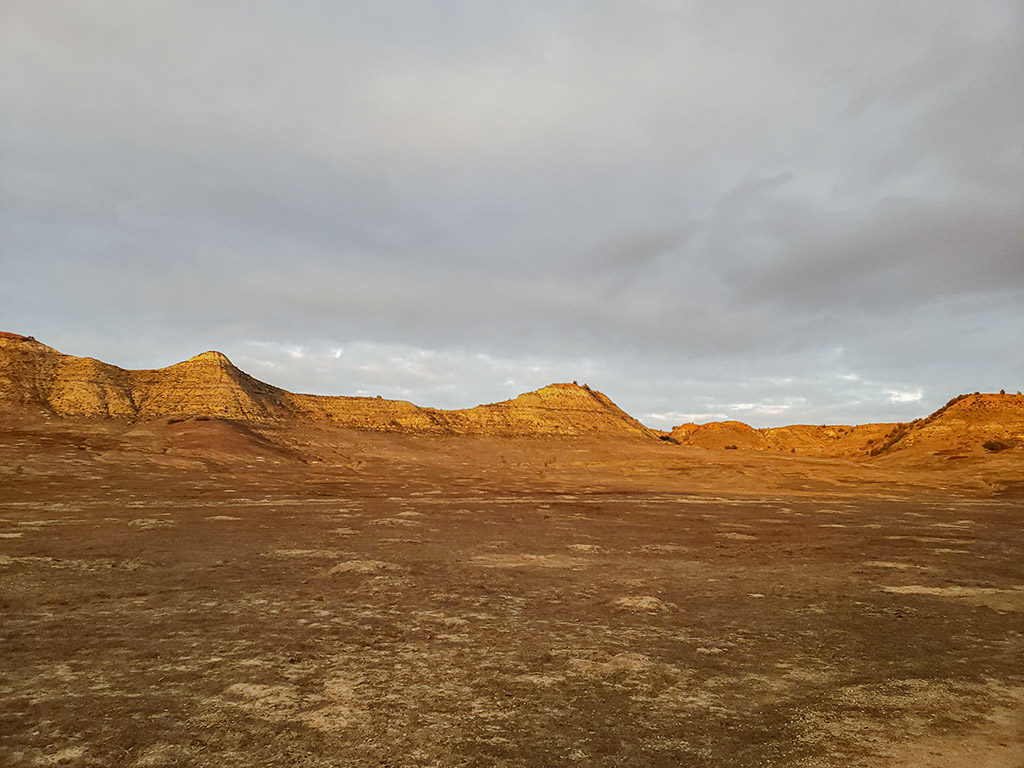 An urban development project of prairie dogs had gobbled up a good chunk of real estate that would have to be crossed to get to the ridge.

We got out and headed across the flat.  At first, we struck out across the prairie dog town to the ridge of hills nearby. We hiked in unison.  Over the years, we’ve developed a shared speed, somewhere between a casual stroll and a hasty pace.

As we marched across the prairie dog town, the sun peaked out a bit to pour molten gold on the landscape. Gold is one of our favorite colors in the Badlands.

After a few minutes, she hauled up short. “Wait. Which way are you going?”

The distance between us had started out a few feet from each other. Now, we were splitting up — yards apart. It was as though we were going to different directions wider.

I answered, “I’m going up to this one. I think the view to the north is going to get lit up.”  I pointed to the low point on a ridge where I could access higher points.

Now we had goals. What had been just a bit of a physical fitness endeavor at the end of a dark day now offered the potential for a visual reward. The anticipation for a last glimpse of sunshine continued to build. Already, the far western horizon of hills showed clouds breaking up. As the clouds moved and the sun lowered, a bit of color appeared the landscape.

That meant that if we timed it right, the sun would set after the break opened the sky.  So, with quick glances at the sky to judge our timing, we notched up our pace. She headed to the nearby hill, and I continued on to the distant ridge.  It meant I had to hustle. That’s because I had twice as far to go as she did.

It wouldn’t be much of a golden hour. Maybe a golden minute.

The last 25 feet were loose gravel. I didn’t have time to pick a more secure and stable path. So, on my hands and knees, I scrambled up the loose rocks. I  neared the top.

Sure enough, as I stepped to the top of the ridge, the sun, now setting in the southwest, spotlighted the river valley below.  Bingo! 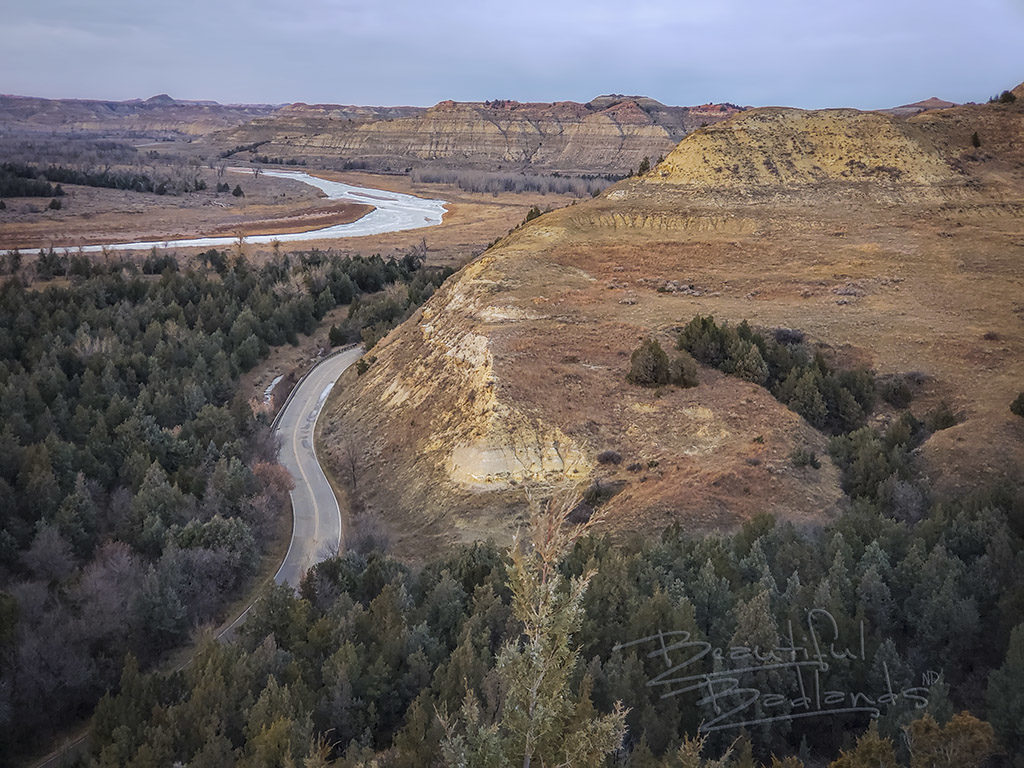 To the north, the valley that had been in darkness was now in the light for just a couple minutes.

We both were on our own, in our own discovery, with our own thoughts and reactions. We were now at least a quarter-mile apart. 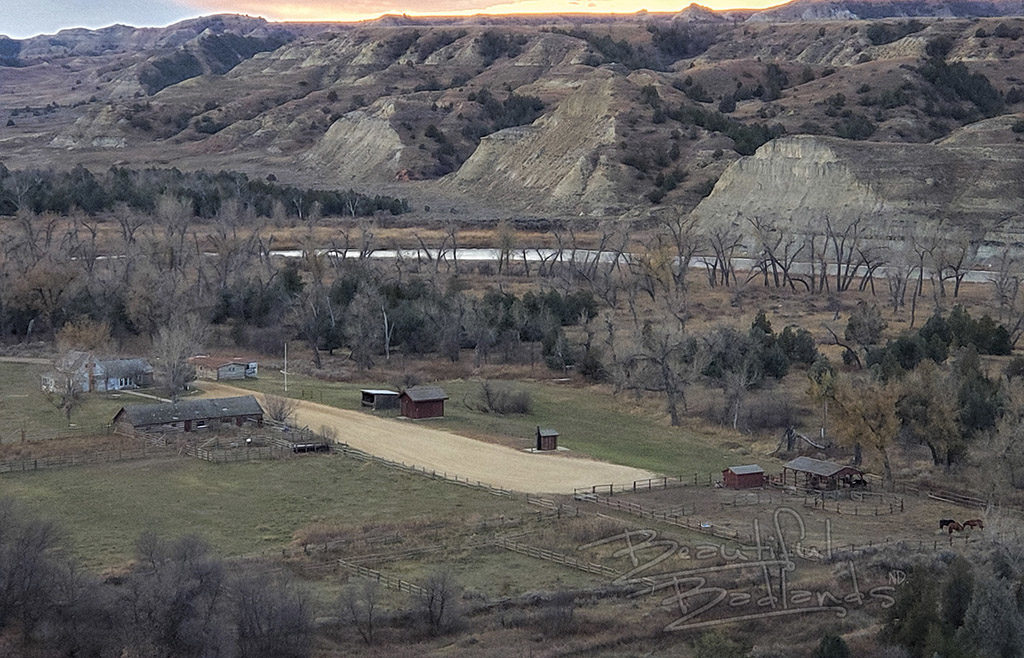 Looking down on Peaceful Valley Ranch

In the other direction, I got a glimpse of the historic Pleasant Valley Ranch.

In less than 10 minutes, the world darkened, the sun slid away and in its place, the afterglow of the day. 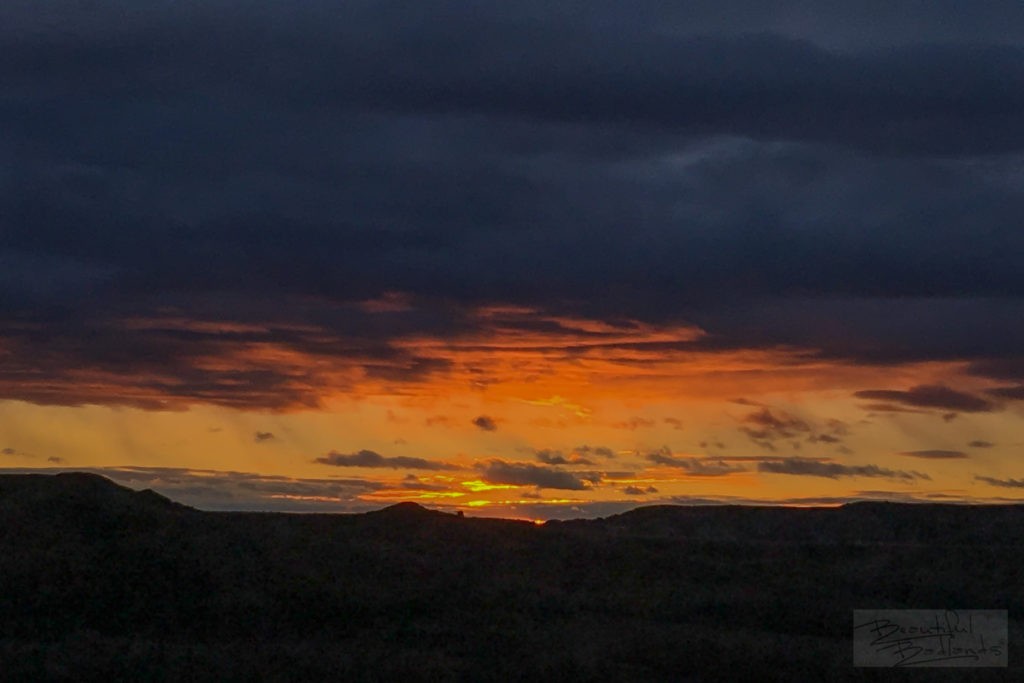 She captured the moment that the dull day turned into a vibrant flaming color. The view over Peaceful Valley Ranch in the Theodore Roosevelt National Park was compensation for the race to the top.

Her heart was slowing down after the exertion, and her breathing returned to normal.  She stood silently, basking in the changing landscape.  It was just as well we were so far apart. It allowed us to enter our own solitary appreciation for what God had done in creation, and in this moment. 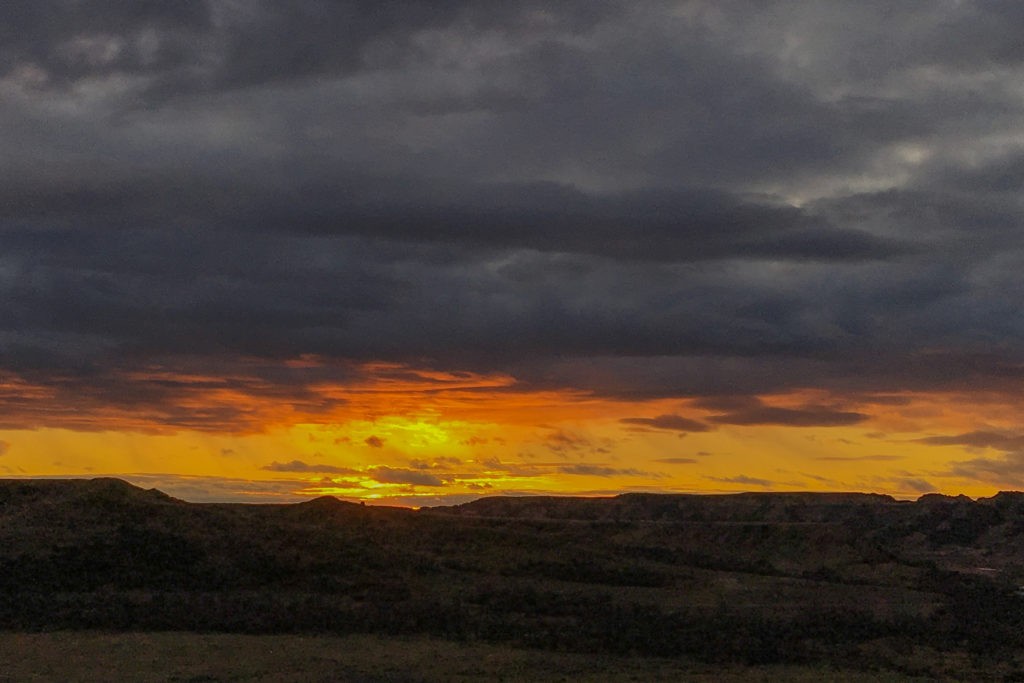 She looked forward to the promise of more glorious revelations of God’s creative abilities.  She knew that this brilliant horizon would be repeated and she made plans to be there when it happened.  Yes, this first sunset of November 2019 was now recorded forever.

Without a word between us, we turned at the same time and started the hike back to the pickup truck. At the edge of the prairie dog town, she zigged right and I zagged left.  I wasn’t ready to get out of the immersion into the day.  So, I stretched the walk downhill into a leisurely stroll in the dusk of the evening.

We were entertained by a distant conversation.  To the south, a high-pitched siren of a coyote howl told us where the mournful critter sang — off in the trees along a creek.

A deep voice barked the answer to the siren howl. The reply of a second coyote echoed from the hills we’d just left. Back and forth. Howl. Bark. Howl. Bark.

Once back in the pickup truck, we turned on the headlights and realized how accustomed to evening’s darkness we’d become.  The lights were bright.

A slow easy pace through the Park to the entry — about 25 miles an hour. We passed deer and bison along the side of the road.  They were in no hurry and neither were we.

The gift of a few minutes of golden light after such a gloomy day lifted our spirits.

Video gives a good idea of how the light appeared momentarily then darkness again.

Stay tuned for more photos and videos to demonstrate the beauty of the changing seasons in the North Dakota Badlands.  Just add your name to the “notice list” to get a notice in your inbox when a new story is posted.  (It’s in the upper right of this page.)

Follow us on Facebook where you can get up to the moment news from a variety of sources in the Badlands.

Our Things to Do Page is the most complete calendar of events in Western North Dakota.