Huge Horns! Bighorns in the Badlands of North Dakota! 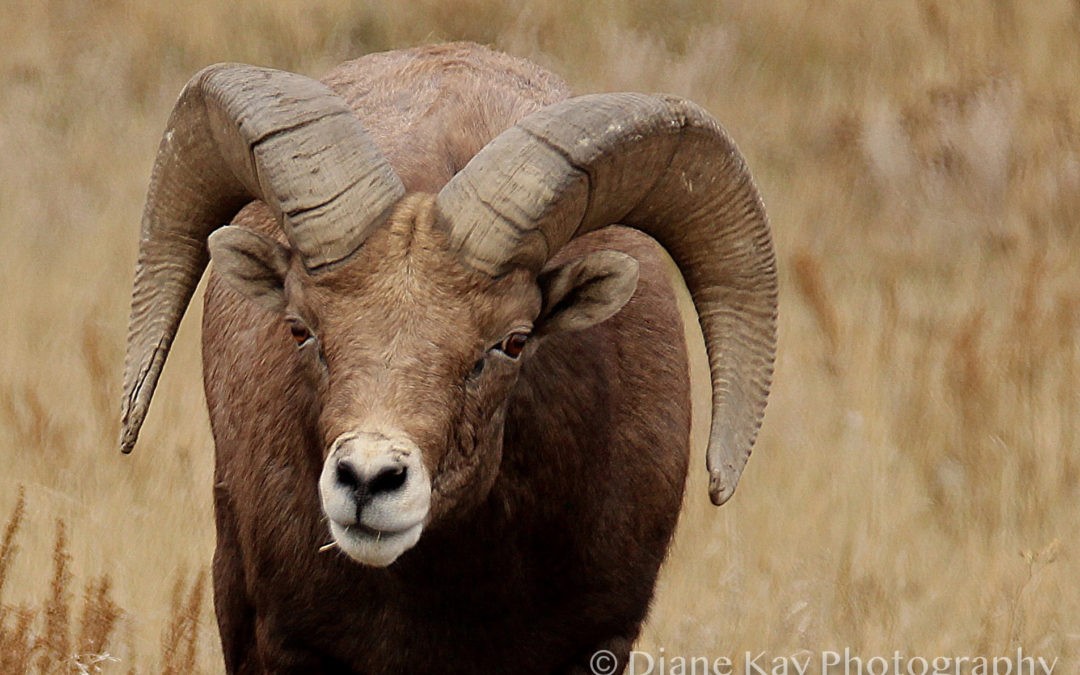 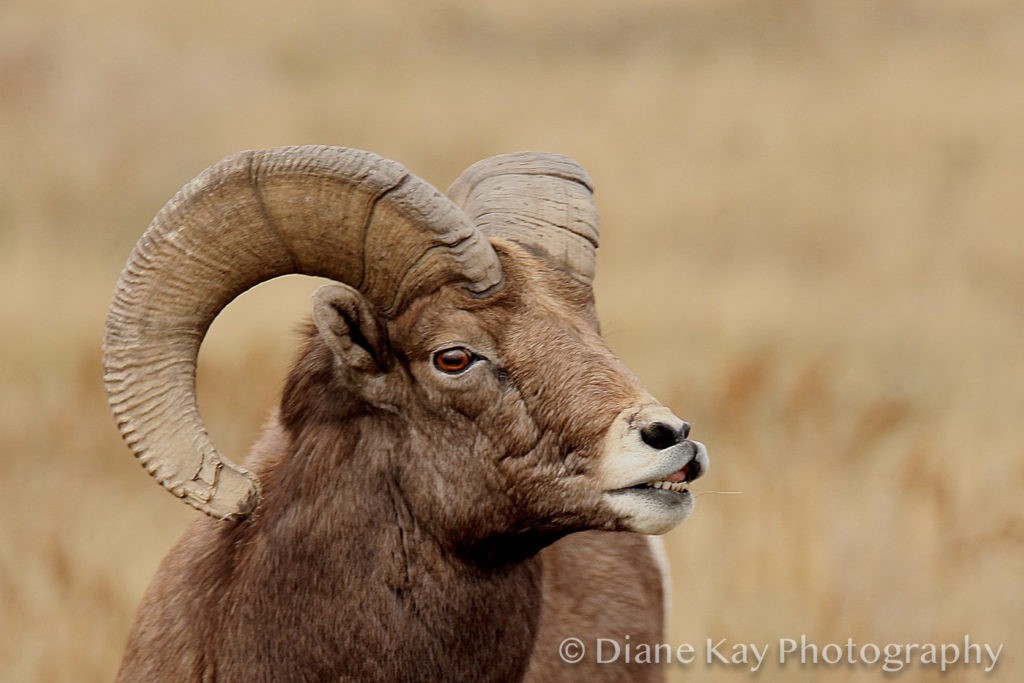 Bighorn sheep are generally a dark brown to gray/brown color with a white rump patch, muzzle and back of legs. Their coats may appear considerably lighter in spring before the winter coat is shed revealing the darker summer coat beneath. Photo by Diane Kay Photography. 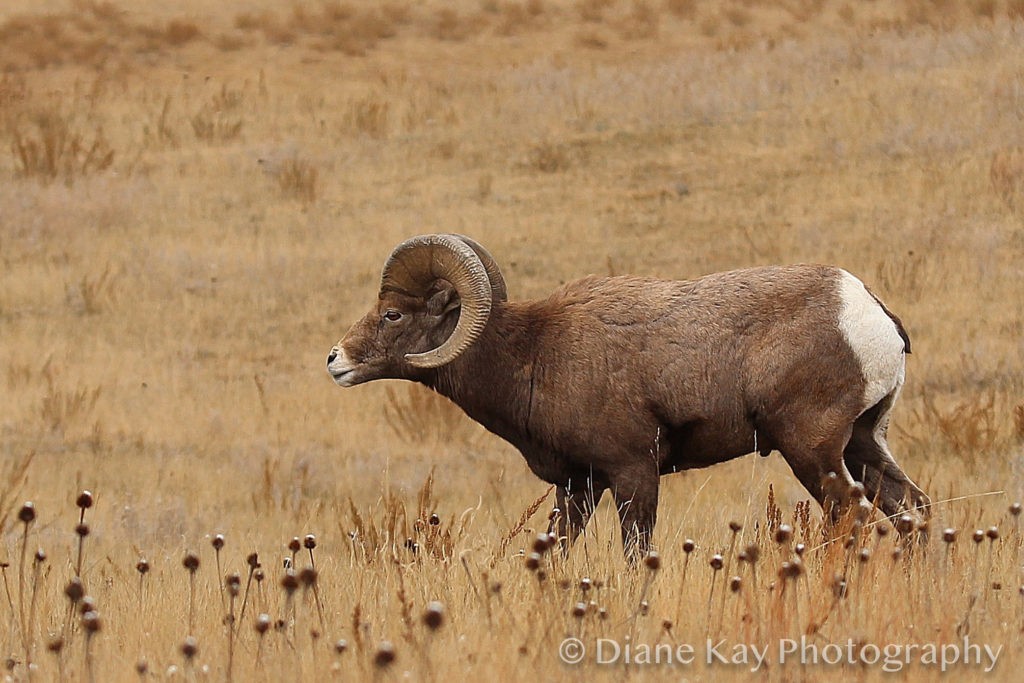 The head of a mature ram makes up about 12 percent of its body weight. Rams often break the tips of their horns while clashing during the rut. Photography by Diane Kay Photography.

Bighorn Sheep in the Badlands of North Dakota

The most difficult mammals to observe in the wilds of western North Dakota are bighorn sheep.   According to the North Dakota Game and Fish Department they are the most rare of the big game species in the state.  They number about 330 statewide as of 2019, in keeping with the latest averages according to a recent article in the Grand Forks Herald.  They were first recorded for science in North Dakota by the Lewis and Clark expedition in 1805 along the Yellowstone River. 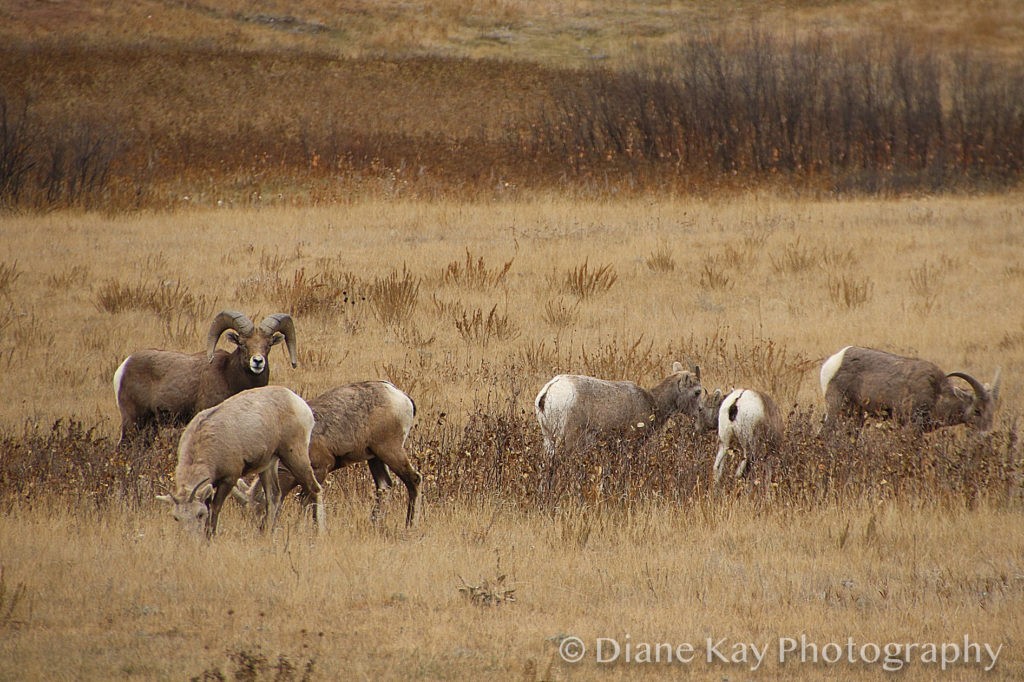 Rams typically migrate to home ranges of ewes in mid-October, with the rut peaking during November through early December. Photo by Diane Kay Photography.

Horns of the Rams

Horns or antlers?   Clarification from the Smithsonian Institute indicates that horn consist of bone encased in the protein keratin, which is also found in human fingernails. Horns are generally permanent, and won’t regrow if they’re damaged or removed. By contrast, antlers consist of bone covered by living skin known as “velvet,” which supplies blood as the bone grows. Antlers will regrow after they fall off, which they do seasonally. You can see horns on many kinds of animals, and on males and females alike, but antlers grow on species in the deer family, and typically on males. 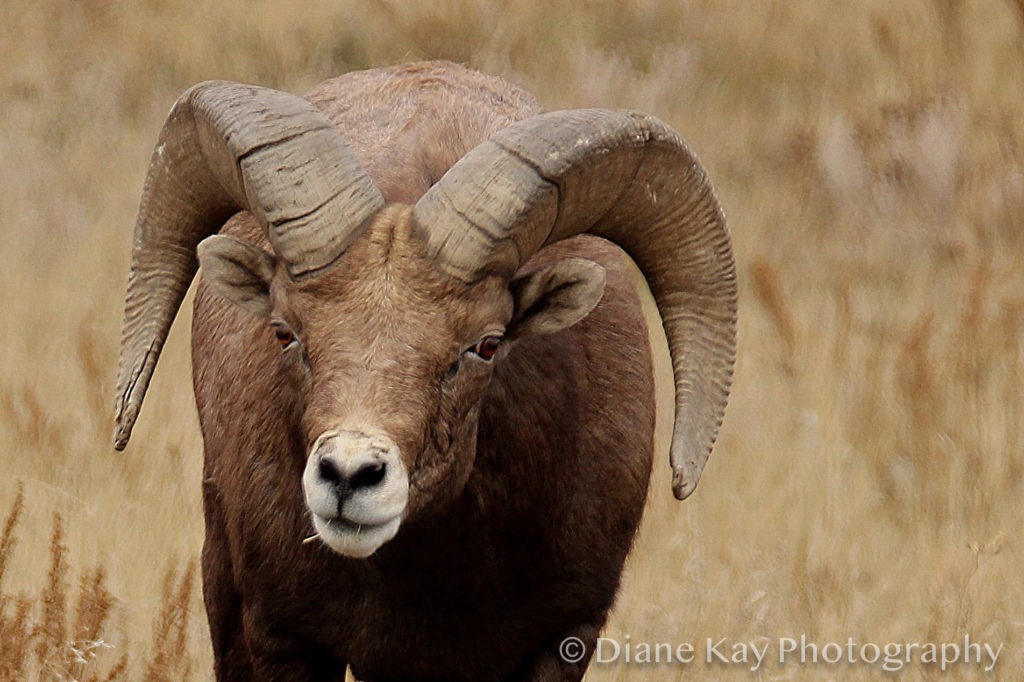 Bighorn rams, (males) have massive horns which can spiral back and out to form a complete arc of more than 35 inches in length. Ewes have much smaller 8 to 10-inch sickle-shaped horns. Photography by Diane Kay Photography.

The ram’s horns can weigh up to 35 pounds.  The National Wildlife Federation reports that older rams may have massive horns that can grow over three feet long with a more than one-foot circumference at the base. Females, or ewes, also have horns, but they are short with only a slight curvature. 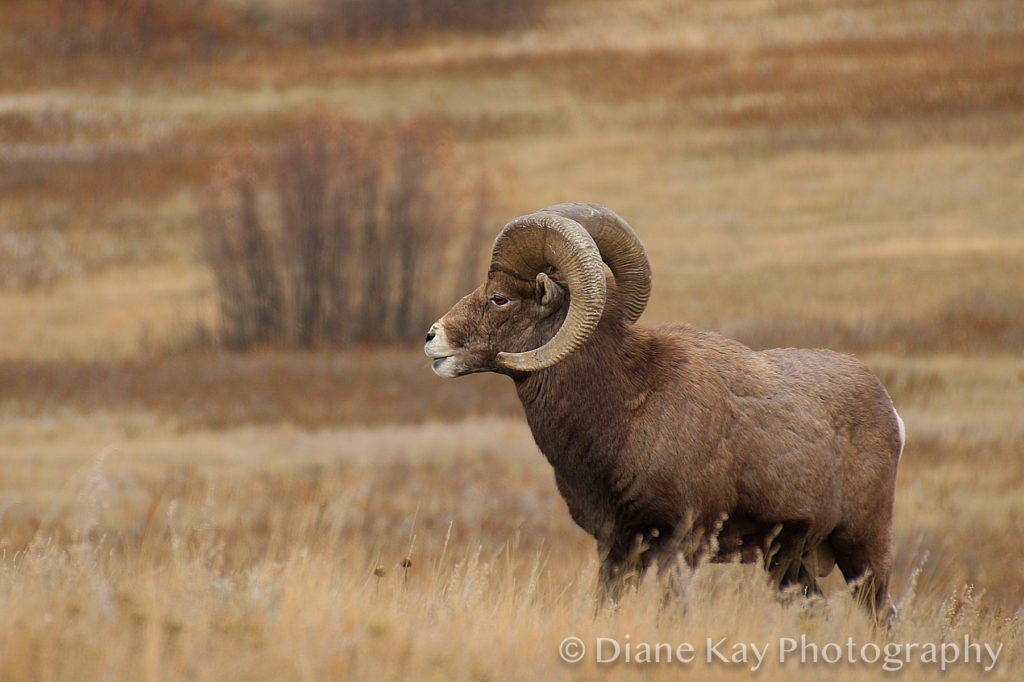 Both rams and ewes use their horns as tools for eating and fighting.  During the rut in November and December, rams have been known to compete against one another for up to 20 hours.  They literally run against each other head on, their horns clashing.   Sometimes the sound of this fierce competition can be heard over a mile away! 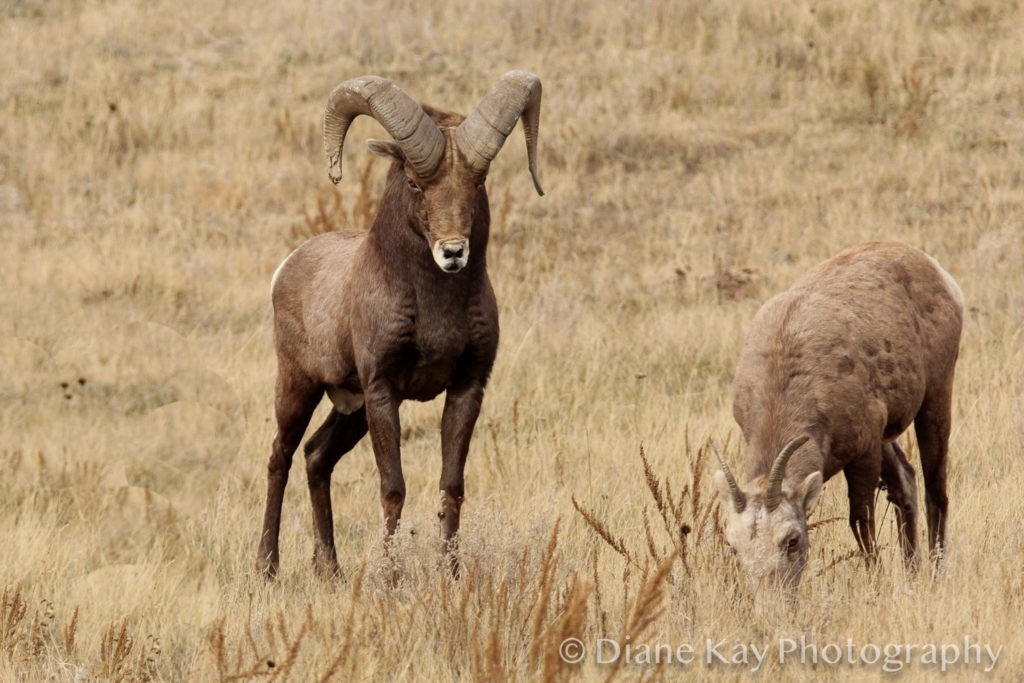 Rams Can Be Big!

The National Big Horn Sheep Center reports that a large ram can weigh over 300 pounds, and stand more than 42 inches at the shoulder.   In North Dakota, the average weight for a ram is about 230 pounds.   Females weigh between 75 and 200 pounds, according to Nature Works. 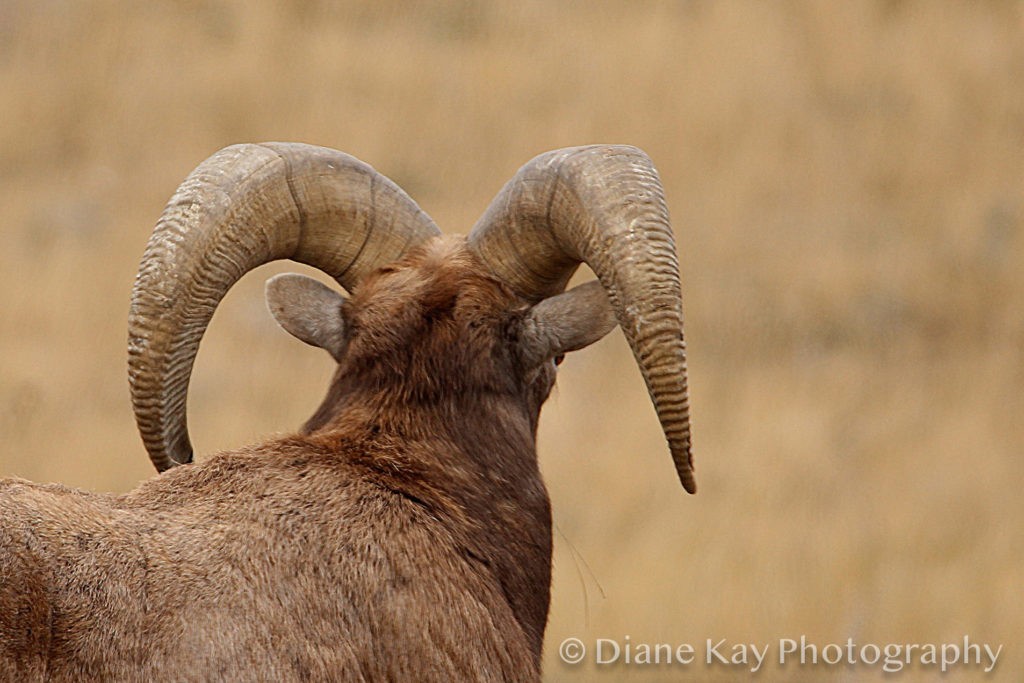 Bighorn sheep get their name from the large, curved horns on the males, or rams; with female sheep sporting shorter, less curved horns. Photo by Diane Kay.

Bighorns are most active during the day while they forage and bed near exposed escape terrain. Photography by Diane Kay Photography. 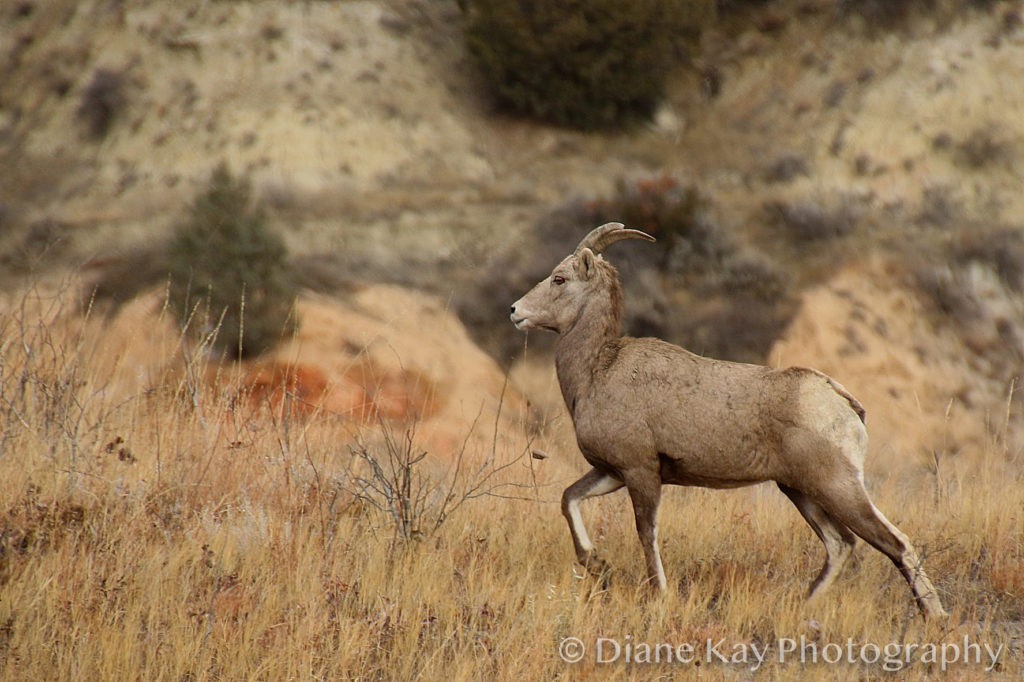 Female bighorn sheep are called ewes and have horns that curve only slightly, as opposed to the large tightly curled horns of the rams. Ewes typically weigh 125-150 pounds. Photo by Diane Kay Photography.

Bighorn sheep are found only in the rough and steep badlands terrain along the Little Missouri River.  They browse on grasses, clover and sedges nearby open grasslands in warm months, and on woody plants like willow, sage and rabbit brush in cold months. 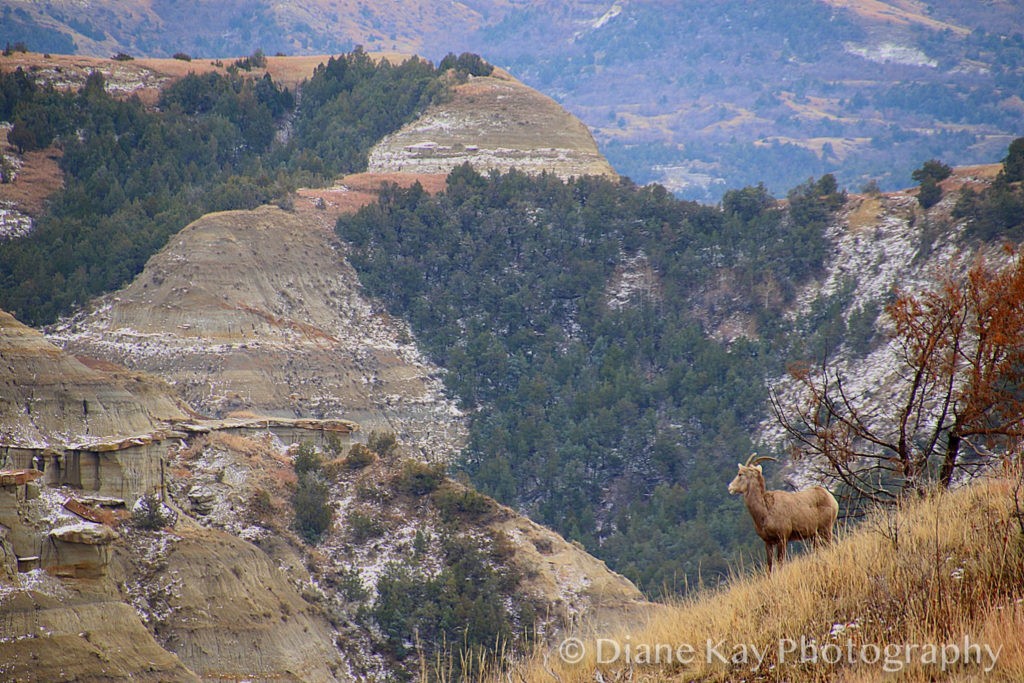 In North Dakota bighorn sheep are found only in steep badlands terrain along the Little Missouri River. Photo by Diane Kay Photography. 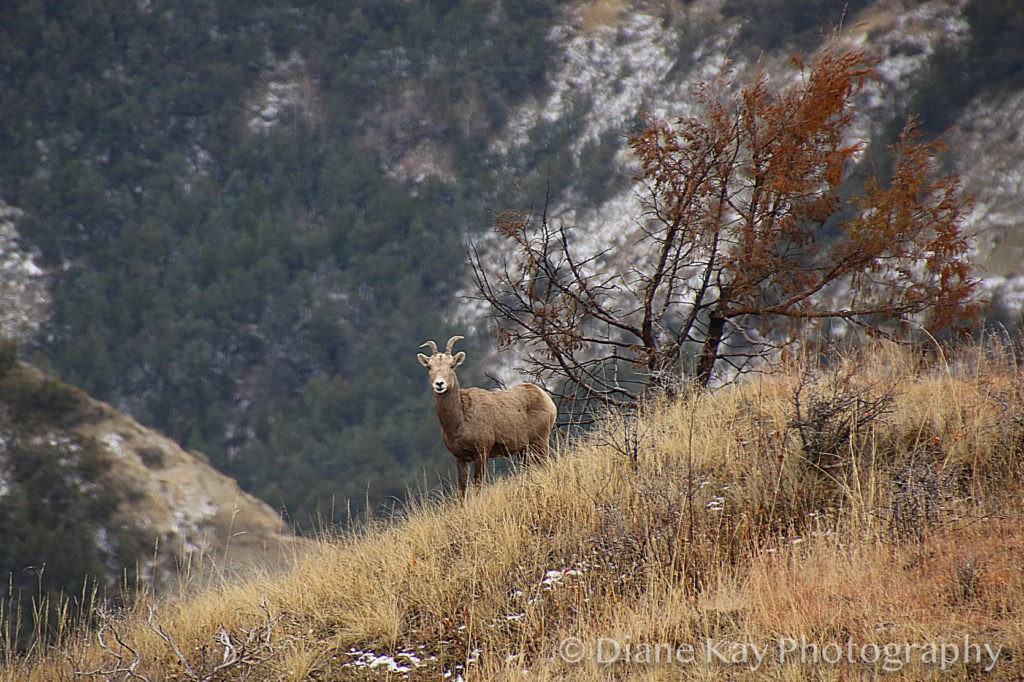 Big horn sheep in North Dakota are only found in the rugged western areas of the badlands. Photo by Diane Kay Photography.

The Other Large Badlands Mammal…..

One other large mammal found in western North Dakota holds even more people in captivation than the elusive bighorn sheep.   Bison!   The American Bison is a symbol of the strength, tenacity, and magnificence of the West!   At one point they were nearly extinct!  Read more about these fascinating animals which reside in both the North and South Units of Theodore Roosevelt National Park here:   How Bison Made It Back to the Park!

Check out some of the action, and discover the beauty of the badlands areas here:   Hysterical! Bison Rubs His….On That Fence!

Don’t forget to Subscribe to our Blog in the upper right hand corner of this page. 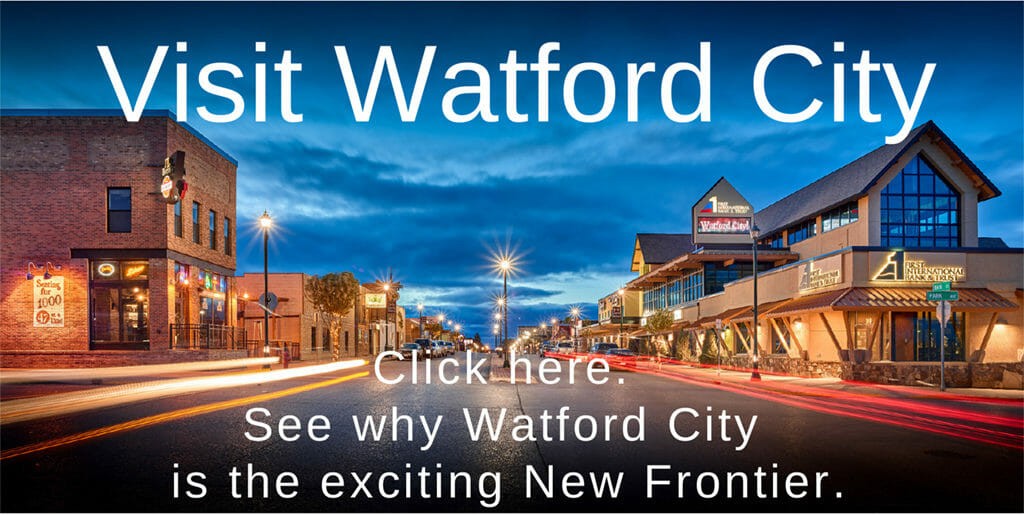