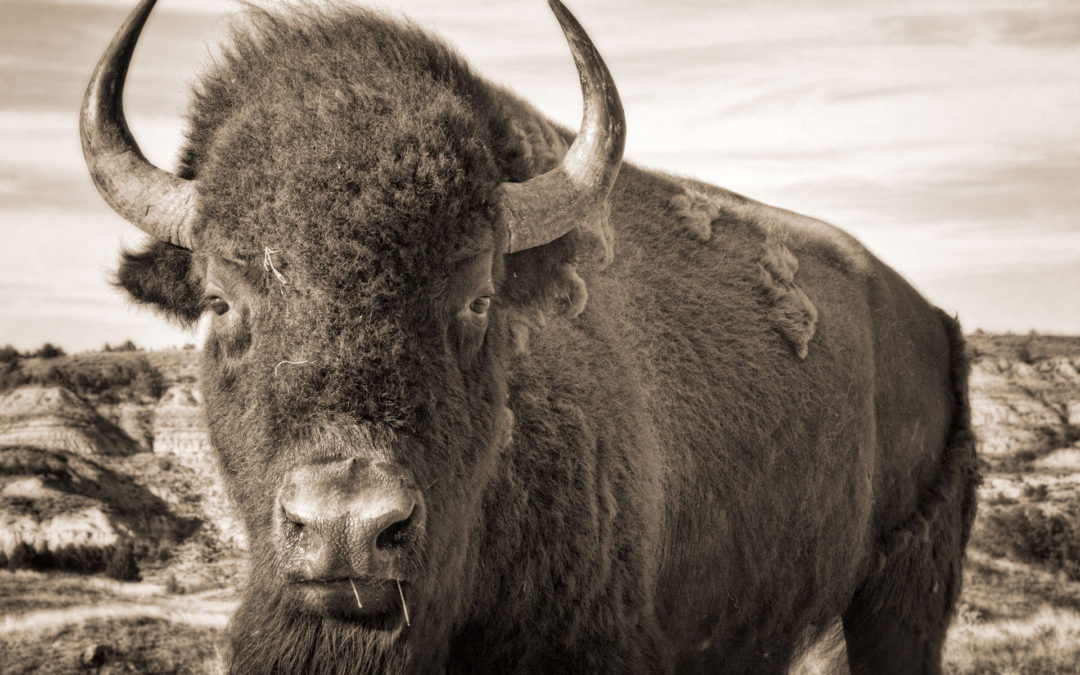 Bison may be the largest North American animal in North America, and that’s part of why they are celebrated every November 2.  As you may expect, they are the stars of the Theodore Roosevelt National Park. If you don’t believe me, just look where cars are stopped and cameras are clicking. 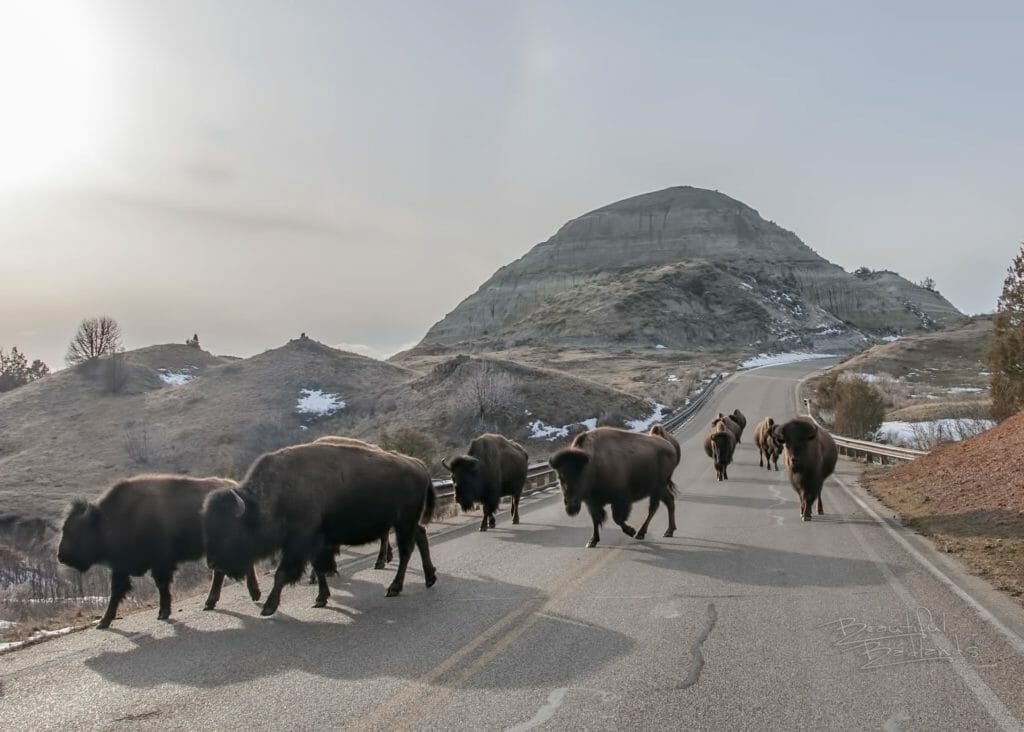 A faint sundog overhead, bison stroll down the road like it’s a summer day.

Most of the wild bison herd were wiped out by ignorant, wasteful wanton bison hunts. Even buffalo hunts by indigenous people were based on the errant idea of a never-ending supply. Finally, just a few scattered herds remained.  Many of those were captured by men who had been buffalo hunters, now turned conservationists as they saw the end of the nation’s bison.  A few ranchers kept bison herds.

The near loss of this animal –forever–is well-documented. Once allegedly number around 60-million in North American, they were down to a thousand or two..

Ironically, one of the incentives to bring Theodore Roosevelt to the Dakota Territory was to shoot a bison. His timing caught the end of the decimation of the great herds and he became a champion for bison preservation.  He was alarmed when a friend who had ridden across the Montana prairies returned to tell Roosevelt he didn’t see a live bison and never were bison carcasses out of sight.

So, as word spread that the thundering herds of bison were no longer here, more people became interested in preserving the animals.

Bison wouldn’t be here at the Theodore Roosevelt National Park if it weren’t for one of the worst blizzards and coldest winters on record in the Great Plains.  A legendary cattle-killing blizzard of 1886 wiped out entire cattle herds. Ranchers who depended on the income from their cattle were devastated.

At the time, open range grazing was getting fenced out in Montana, the Dakota Territory, and Wyoming.  Along with that, ranchers began to raise hay on the unpredictable prairie to try to feed cattle all winter.  Ranching was not an attractive lifestyle. The cattle that were brought here were not suited for the weather.

First, drought came and wiped out at least two years hay supply that they would have fed their cattle.

Then, in the winter of 1886-87, a massive blizzard hit. It killed hundreds of thousands of cows in the blizzard.  Ranchers rode out to their herds, when conditions allowed, only to find dead carcasses everywhere. There were so many dead cattle, they washed into streams and rivers to float downstream.

No bison carcasses were found. They had survived the 50-degree below zero temps, accumulated snowfall several feet deep and massive towering snowdrifts.  So, as dead cattle lay everywhere, no one could find a dead bison carcass. 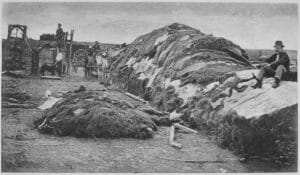 When they realized the killer storm did not kill bison, a few enterprising ranchers decided to try to crossbreed bison bloodline into their cattle herds. If that worked, they could produce offspring that could be better equipped to withstand winter.  (Some say it was  the ranchers’ wives that pushed for their efforts to save the bison.)

From the National Park Service:

A Kansas rancher, later to be known as “Buffalo” Jones noticed, that not a single frozen bison carcass was found the following spring.

“I commended to ponder upon the contrast between the quality of the white man’s domestic cattle. I thought to myself why not domesticate this wonderful beast which can endure such a blizzard, defying a storm so destructive to our domesticate species? Why not infuse this hardy blood into our native cattle, and have a perfect animal?”

From different regions of the Great Plains, conservationists established five “seed stock” herds. They co-mingled the Buffalo Jones herd, the Charles Goodnight herd, the Allard herd, the Dupree herd, and other smaller selections to become the Fort Niobrara Nebraska herd.

Eventually, scientists discovered the DNA of these hardy winter-surviving bison were descended from much larger animals that migrated to America from northern Asia. They came from regions where winters are much longer and much more dreadful.  Fossil discoveries showed some of the migrating large beasts “bison latiforns” had horns nine-feet wide from tip to tip. 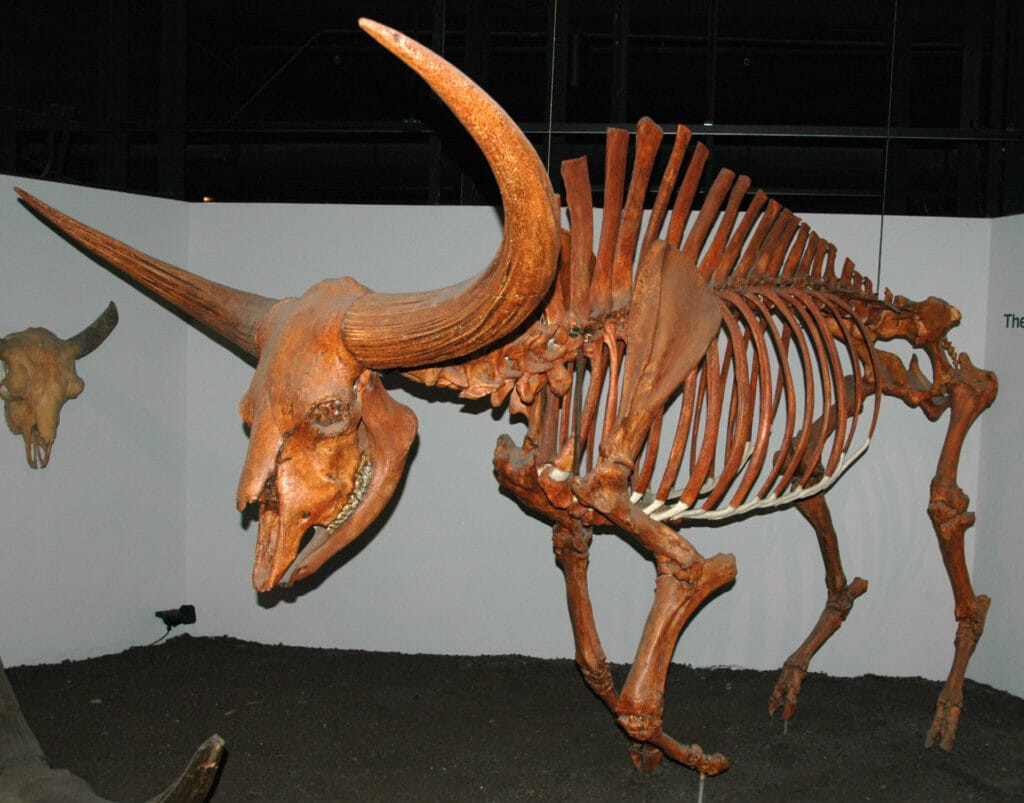 Bison were trucked from the South Unit to the North Unit after the South Unit herd got sufficiently established. From National Park Service “Bison Management.” https://www.nps.gov/thro/learn/nature/bison-management.htm

They survive because they grow a thick wooly coat, and add additional layers of fat in the fall.  Bison are so impervious to winter storms, that when a storm blows in, bison just turn in to the storm and wait for it to pass.

The Niobrara herd grew so that in 1956, 29 were shipped north. They came to the young national wildlife area in southwestern North Dakota called the Theodore Roosevelt National Memorial Park. 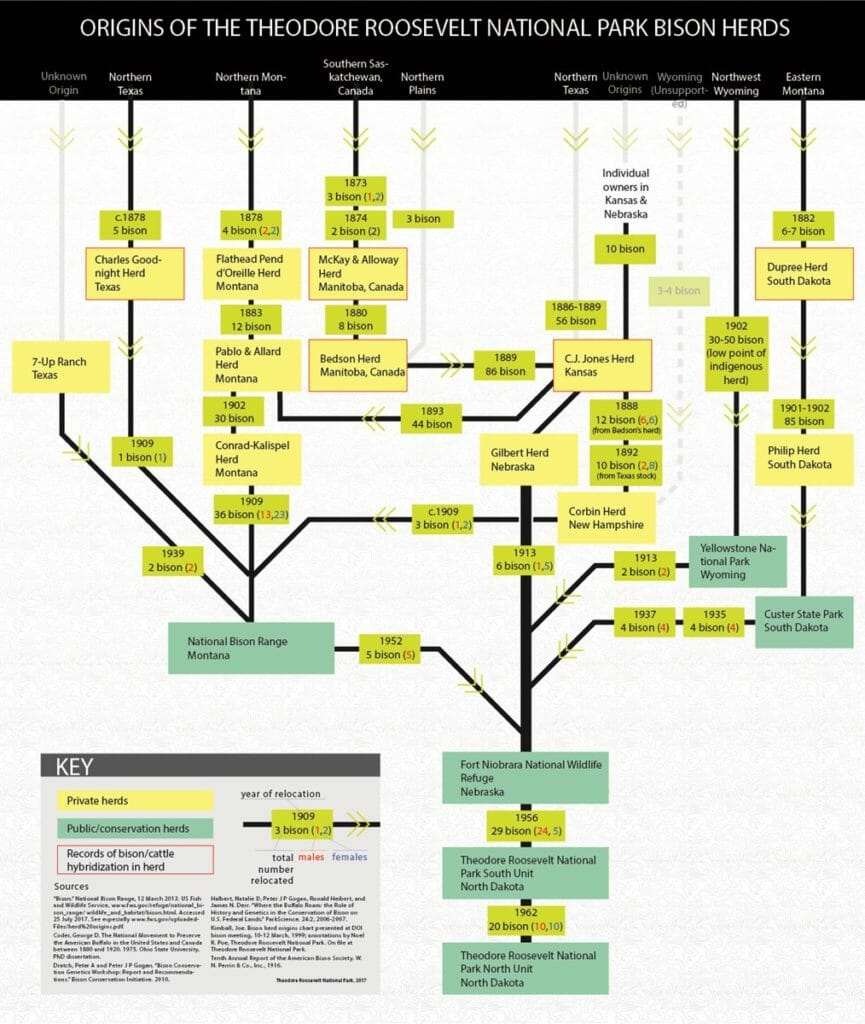 From National Park Service, “Where Our Bison Came From.” Click to see full size.

Today, if you want to see these hardy ferocious animals with an impressive ancestry, you can head to the North or South Unit of the Theodore Roosevelt National Park.

The park manages the bison herds to maintain a balance that can be supported by the ecosystem. Since the South Unit is larger, it accommodates more bison, 200-400.  The smaller North Unit includes 100-300 head. 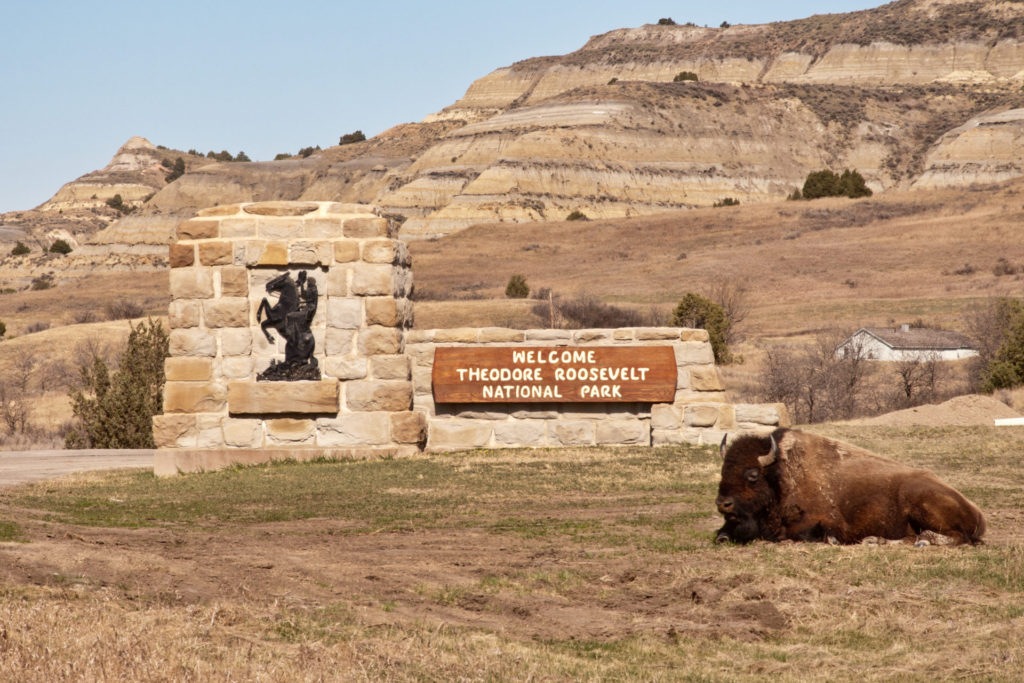 A bison sleeps at the entrance of the North Unit of the Theodore Roosevelt National Park.

Tip:  You will most likely find them in the lower ground in the park where it’s easier to feed on grasses. Their highly developed sense of smell helps them find grass even under snow.

On warm winter days when the sun heats up the bright hillsides of the Park, you may find the animals moving to the warm hills to take a nap. 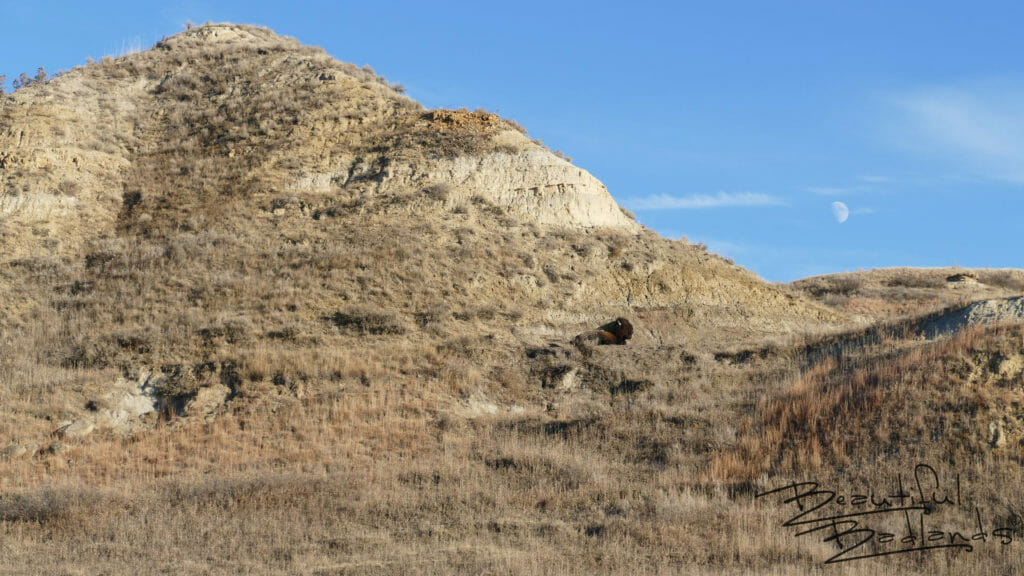 A dozing bison bull basks in the sun on a west-facing hillside.

When we visit the Park, we love to locate herds and add photographs to our gallery of bison photos.

Sometimes they find us, walk right in and pay us no attention. 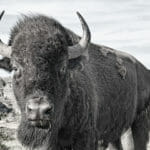 That first image up at the start of this article is our most popular — and is hanging in homes from Oregon to Minnesota, Arizona to North Dakota. 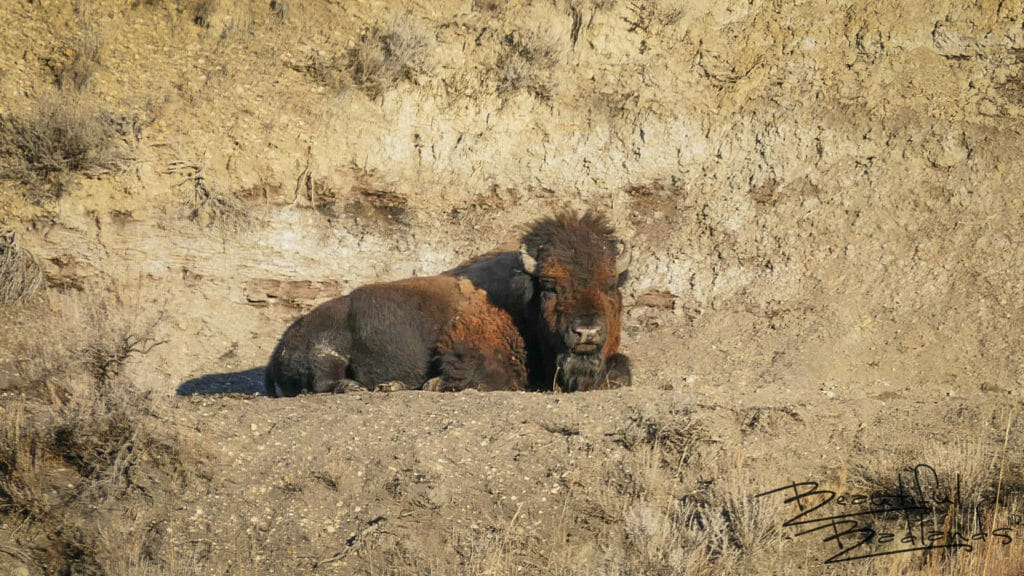 A dozing bison bull basks in the sun on a west-facing hillside.

So, if you subscribe to this blog, you’ll undoubtedly see more stories about bison in weeks to come.  They’re a popular topic — but then, so is eating.  Our “Tasty Tuesday” entries sure do get a lot of attention, such as this one from Medora.

You can add to your collection of images from the Badlands. Click on this image to see what is available 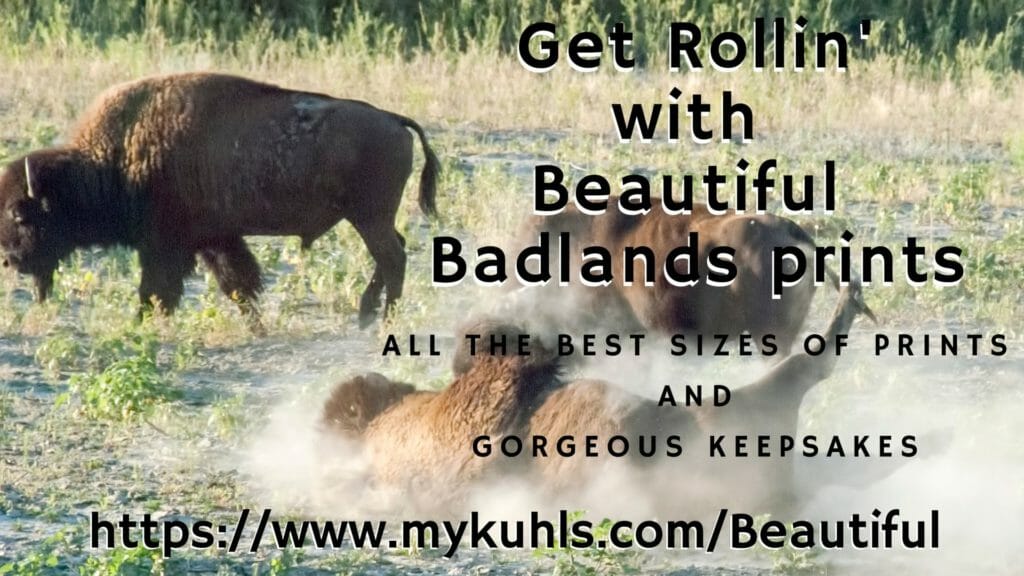