Elkhorn Ranch, this weekend’s get away 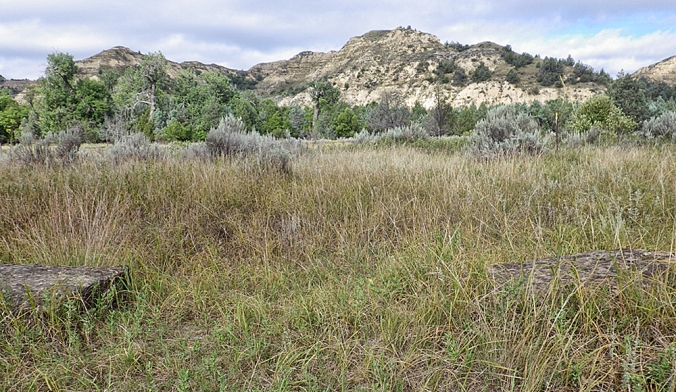 Flat grasslands ringed by cliffs and buttes of the North Dakota Badlands where Teddy Roosevelt ranched. The healing place for a soon-to-be President Teddy Roosevelt’s backyard at the Elkhorn Ranch. The house stood on the foundation blocks which are all that’s left of his ranch home

Off the beaten path

About 20 years before he became the 26th U.S. President, Roosevelt lived the life of a wilderness rancher.

It’s exactly where Teddy Roosevelt went to get away from it all. Elkhorn Ranch became his refuge. After a string of losses, he came here to get his life back on track.

To find the healing place TR called home for many years, you’ll travel more than 25 miles of gravel road through historic and consistent ranch country.

As Roosevelt said, “The lives of such places were strangely cut off from the outside world. The whole region is one vast grazing country.”

It’s almost straight north of Medora, but there are no “straight north” roads or any straight roads in the Badlands.  So, from Medora, you’ll drive west on either old Highway 10, the Old Red Trail, or on Interstate 94, and exit at Sentinel Butte.  Here’s a map:

To the ear, there is a great amount of peacefulness, but that does not mean quiet. Birds carry on loud conversations, particularly in the early morning and evening.  The wind itself is a sound that travels the musical octaves. In the evening, it’s the melody of the coyotes’ songs you’ll hear.

To really get away from it all, a short hike up the hill to the north gave us a glimpse of the road we follow to get to the campground. The red scoria road winds down through the bottom ground trees to the clearing where Roosevelt set up his ranch.

The scoria road to the national landmark of Teddy Roosevelt’s Elkhorn Ranch.

The Elkhorn Ranch site is undeveloped, so it will exercise your imagination skills to envision what it was like 150 years ago.

“Just in front of the ranch veranda is a line of old cottonwoods that shade it during the fierce heats of summer, rendering it always cool and pleasant.  But a few feet beyond these trees comes the cut-off bank of the (Little Missouri) river. … The shallow stream winds as if lost.”

This time of year, abundant green is a satisfying color along the Little Missouri River in front of the Elkhorn Ranch house.

“The stream twists down through the valley in long sweeps, leaving oval wooded bottoms, first on one side and then on the other; and in an open glade among the thick-growing timer stands the long, low house of hewn logs.”

The Elkhorn ranch area is undeveloped and perhaps that’s best. It gives a visitor a chance to see Roosevelt’s nature as it was when he was here, an experience that prompted him to establish conservation measures and advance the national park system. Thanks to his time in these valleys and hills, Theodore Roosevelt became “the conservation president,” and doubled the number of sites within the National Park system. As President from 1901 to 1909, he signed legislation establishing five new national parks.

The evening golden hour on a hilltop above the Elkhorn Ranch

Theodore Roosevelt’s healing place is for the day-visitor, a moment of spiritual rest and visual stimulation. Though it’s not as challenging as it was for Roosevelt, visitors still get a sense of accomplishment when they climb a hill, turn, and look back at how far they’ve come. That’s a good life lesson, isn’t it?

Through the summer, the variant green colors are impressive. Then, in the fall, the region is outstanding.

The actual historic site is accessible to all, but you don’t need to stop there.  The Maah Daah Hey trail runs through the valley and provides a good easy hike. That’s why the Elkhorn Ranch site and the surrounding valley is one of our top recommendations.  Others include:

Summit Trail near Watford City and

Achenbach Trail in the north unit of the Theodore Roosevelt National Park.

What are your recommendations? We’d love to hear from you.