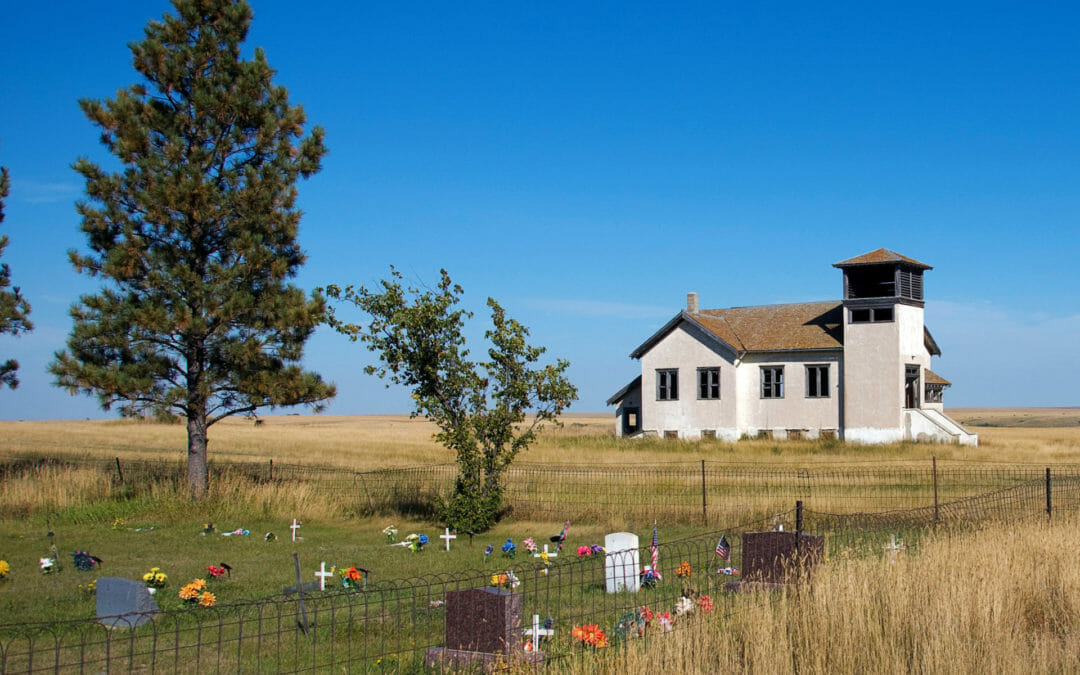 With great sadness, we mourn the loss of an amazing landmark. 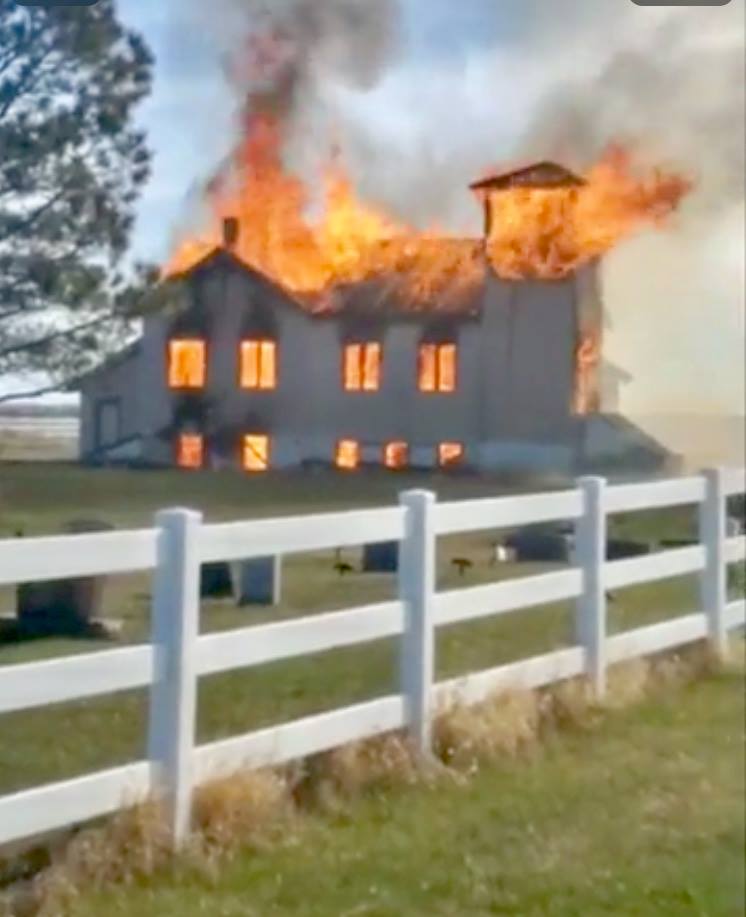 It’s reported, that an arsonist burned down one of the last standing buildings from Elbowoods — the Memorial Congregational Church.

75 years ago, the landscape familiar as the Badlands followed the Missouri River toward Garrison.  The bluffs and buttes surrounded lush farm ground along the river.  It’s where Elbowoods once stood.

The Memorial Congregational Church sat by itself on a December afternoon on a Mountrail County prairie where it was moved in 1953.

In the fall of 2009, the prairie grasses surrounded the solid Elbowoods church building, the Memorial Congregational Church building that once stood along the Missouri River.

This church building had an amazing past.  You know there are stories behind those abandoned church buildings — such as this one.  What’s the story there? Take a trip on Highway 1804 to step back in time.

At first, it was easy to ignore the abandoned prairie church building along Highway 1804. I often drove past the road to the building south of Parshall, North Dakota. But once I stopped to check it out, I uncovered layers of monumental history. Then I would stop often to step into history. 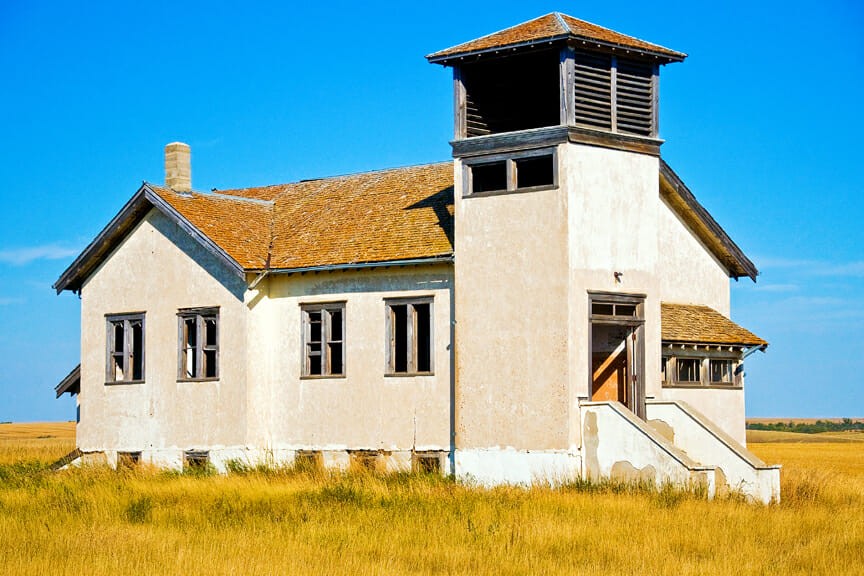 Charles L. Hall, born in England in 1847 moved to New York and became an architect, working in a local mission until he moved to the Dakota Territory.

The story goes back to 1871 when the Dakota Territory was organized and an architect from England worked in a New York mission.  Charles Hall felt the call to minister to the same people who had ministered to Lewis and Clark 67 years earlier, the Mandans.

The same year that the 7th Cavalry marched to Little Big Horn, Charles Hall floated the Missouri River for two weeks upriver to get to his destination. He got off a steamboat armed not with a rifle but with the “Sword of the Lord.”  He landed at Like-a-Fishhook Village where he met with a community of Mandan and Hidatsa people.  (The village is under Lake Sakakawea, now, southwest of White Shield, ND.)

What Custer couldn’t do with a rifle, Hall did with the Gospel.  He forged a peaceful, harmonious co-existence. Hall built a school, a community building, and successfully lobbied for a bridge (Four Bears Bridge) to cross the Missouri River. 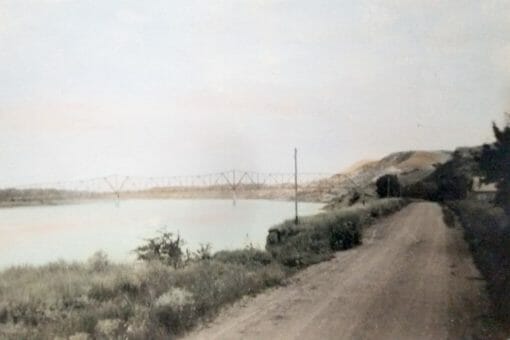 The Army Corps of Engineers flooded the valley.  Highway 8 ran alongside the Missouri River toward the Four Bears Bridge at Elbowoods. This section of the highway is under water. The original Four Bears Bridge is in the background. Photo courtesy of the Tveit family.

Eventually, he and his neighbors built this church building at Elbowoods, North Dakota.  It was the only physical reminder of a work he began about 140 years ago in western North Dakota. It was a long challenge to get it built. It stood until today.

Hall labored among the area’s farmers, ranchers and other residents, both white and Native-American. It took 10 years of patient loving work before the first man converted to the Christian faith.

Trust was earned slowly, but once earned, it became invaluable.  Later both whites and enrolled tribal members met together to worship and socialize.

The Elbowoods Church building was built after 45 years of feeding, teaching, healing whites, and Natives. Locals workers followed the missionary’s plans to build this solid building next to the mission and school he started at Elbowoods.

Crowds came from as far as 30 to 50 miles over rugged Badlands trails and barely passable roads to join in the dedication.  Dignitaries from Bismarck, Minot and New York also came to the dedication.

Standing up to the U.S. Indian Agency

Hall helped the members of the Three Affiliated Tribes rise above the limits placed on them by the dictatorial federal government Indian Agency at Elbowoods.  The Indian Agency was so harsh, Hall later testified, that the Indian Agent required tribal members to stop and bow their head when he walked by.  If they received visitors, the visitor would first have to meet with the Indian Agent before going to meet the family or friends they came to see.

That kind of harsh government attitude was part of the reason why local residents living in poverty would pay $10 a month to have their children schooled, fed and cared for by Hall’s mission school. They preferred his school the free government school.  Wages at that time were about 60 cents a day – if someone could find paying work.  The Mandan were an agricultural people. They tilled the river bottom along the Missouri River and grew corn, squash, pumpkin, sunflower, and tobacco. Families took their produce by horse-drawn wagon to sell in towns such as Minot, 60-miles north. The families used their money to support the mission, its school, church and community programs.

The Elbowoods Congregational Mission church building was dedicated to Charles Hall’s second wife, Susan Webb Hall. He lost at least two children and his first wife to the tireless work of reaching local people with improved diet, health and education. The church people were both white and native; racial distinctions were erased at the Cross.  Together, they built the building by themselves, by hand. They didn’t borrow a penny to build it. It cost them $5,500, with $3,500 coming from their own donations, and another $2,000 donated by friends of Charles Hall.

Moving from the flood

The federal government flooded out the people who lived along the Missouri River and the towns such as Elbowoods. Hundreds of families were forced to move out of their homes. A hospital, school, and many businesses were flooded. Locals moved five church buildings out of the valley, including the Susan Webb Hall Memorial Church building.

Starting on a Friday night, local farmers and ranchers worked non-stop to lift the building from its original footings at Elbowoods. They raced against the flood waters moving into town. By the time they got it up a bit of a hill, the flood was already taking over the original site.  Their work was not done until they moved the building nine miles farther north near the communities of Lucky Mound, Parshall and White Shield.

The building was more than 90 years old and stood alone on the prairie where it was moved during the man-made flood.

When it was moved to its current site, neighbors saw it move in. They said it seemed to them the church was all lit up. A story about the relocated church quoted the neighbors who said, “It gave them a queer feeling as they had never lived near a church before.”

It stood tall and proud

No windows or doors remained on the old structure. It appeared to be solid in its old age. The building was destined for the National Historic Registry.

No furnishings remained inside, no furniture or other features, just a love note to a grandfather.

The church building and cemetery were sacred places and vandals had respected it, until now. They did not leave graffiti or other degrading elements.  A bell tower was as empty as the rest of the building. The tower used to hold a donated bell that called people to worship throughout the early Missouri River Valley.

It is inspiring to know the history behind the building. This is a part of North Dakota history that few people know.

Autumn of 2009, the church stands isolated and preserved.

Charles Hall left an account of the work in his collection of documents assembled in the book 100 Years at Ft. Berthold, 1876 to 1976.  I’m thankful to one of the most refined and regal older member of the tribes, Mary Bateman who lent me her copy.

My thoughts and attachment to the stucco church building are but a sliver compared to others. Tribal elders and retired rancher families who remember the legacy of this build and what it represents are mourning.  I am angry that some rotten scoundrel wiped out this history.

What do you remember about Elbowoods or the Memorial Congregational Church? Share your information by contacting us.

You can sign up to get a note in your inbox when new articles from the Badlands of North Dakota are posted here.  The subscribe box is in the upper right. 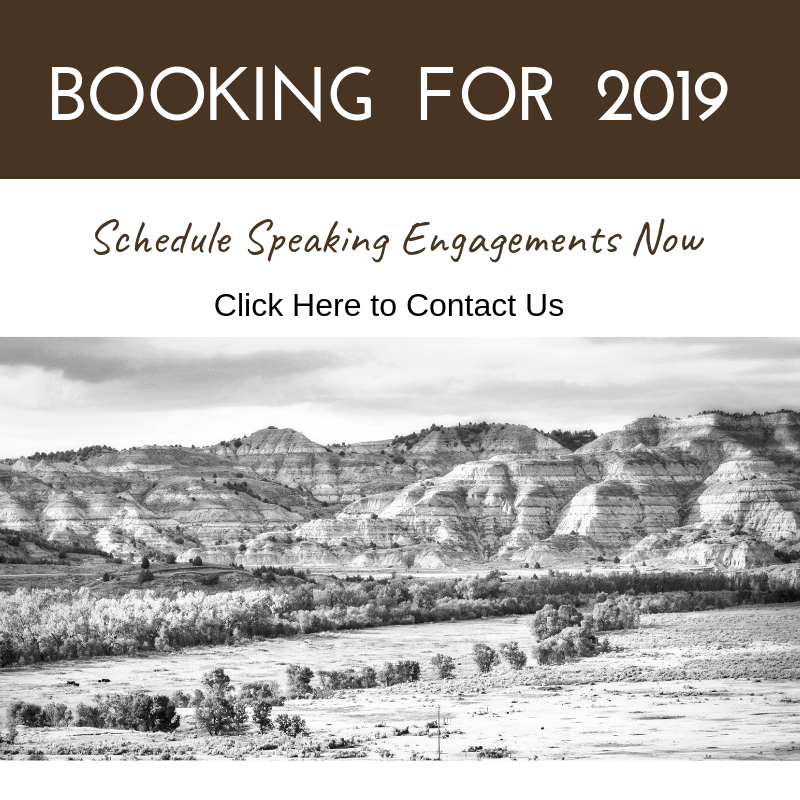