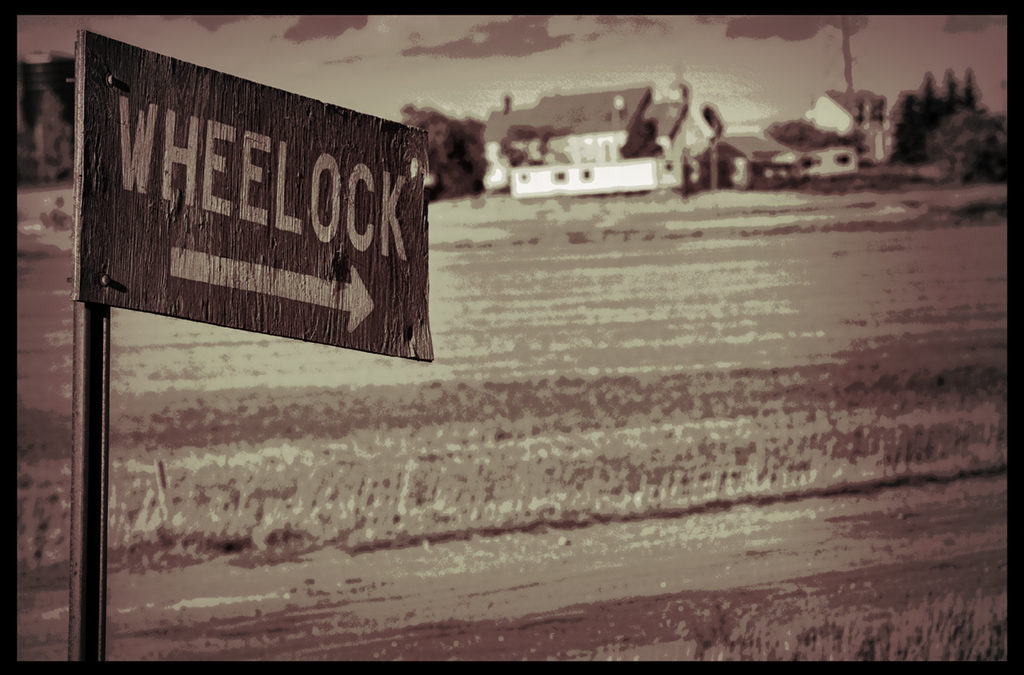 Those who have a heightened sense of paranormal activity may be rewarded by exploring the haunted Ray/Wheelock region.   There’s something about an area that can claim two mass murders of families in one area, a jilted lover murder, and a robbery-murder.

Wheelock first showed up in eastern Williams County, North Dakota about 1901 and became a formal community a year later.  Compared to the vacant prairie, Wheelock was large and affluent. It was named for a Minneapolis newspaper editor and it attracted settlers from Minnesota and South Dakota.

People who couldn’t afford or couldn’t find space in Wheelock moved down the road a couple of miles and established the town of Epping. It was said at the time that property was too expensive in Wheelock but 10 miles away, at Epping, people could find a place to put down roots.

A couple years later, Epping became the site of the first murder in the neighborhood.  In 1907, a frustrated lover killed the woman who had been his girlfriend one week after their baby was born

Meanwhile, back in Wheelock From the Williston Graphic newspaper, May 1906. The Great Northern Railroad Hotel at Wheelock was one of several Great Northern Hotels scattered along the railway across the northern United States.

Wheelock’s population hovered around 115 in the mid-1930s and by the 1950s it reported as many as 400 people in town. Today, there is a handful of residents there.

We heard from one resident this week who told us she does not feel any creepiness in town. She’s there to stay.  She said the only strange occurrences in town are the moose that wander through town once in a while.

It appears the property value has decreased from the days when there was a bustling main street with a bank, hotel, lumberyard and other commercial enterprises.

The town seems haunted by its past.  The solid structures of town dissolved in the last 10 or 15 years, a few old farm shacks and barns remain, but no commercial buildings. By the 1970’s fewer than 24 people lived in Wheelock. In 1994, the town died and was formally dissolved. (Meanwhile, that poor little town down the road, Epping continues and even has its own webpage.) http://www.epping.govoffice.com/

Here’s why it seems haunted — murders: As happens with popular bustling towns, it attracted quite a bit of good and bad attention.  Business was so robust that by the time it celebrated its 25th birthday, it was home to a hotel, general merchandise store, lumber yard, pool hall, drug store, and a bank — and that’s where the first murder happened, at the bank.  It’s that brick building in the center of the three buildings in the photo above.

The bank was profitable, and isolated, miles from any law enforcement. That could be why three bad men took over the bank in 1926. Before they ran off with all the money, they murdered the banker. They avoided capture until one man was caught in Kenmare, North Dakota.  He died in prison.

Of course today, Main Street doesn’t look like it would attract a bank robbery.  The railroad still runs past the town, but there are fewer hoboes than there were 100 years ago.

Newspaper accounts of crimes committed by railroad hoboes are scattered through the newspapers from 1907 to 1920.  For example, in the spring of 1915, Bob Bend, a Minot wholesale liquor dealer was shot and killed in Montana when two hoboes broke into his living quarters, demanded money that he was counting, and killed him. It does not yet appear what it will be — a hotel? A saloon?  Someone’s brave attempt to bring life to Wheelock?

Murder on the Dillon farm north of Wheelock

So while Epping and Wheelock had their share of bloodshed — one apiece– rural murders were also reported. One just northeast of town a couple miles.

On October 20, 1913. Cleve Culbertson, 29-years-old,  hopped a freight train at Plentywood, Montana and rode it east. He rode through Wheelock and got off in Ray 10 miles east. There he huddled down for the night.  Apparently, he had spotted the Dillon farm from the train as he rode into Ray.

Culbertson headed back to the house and met Mrs. Dillon won her way out to see what the shooting was about. He shot her through the heart, according to newspaper accounts. The Williston Graphic newspaper covered the murder, the trail and the lynching that followed.

He then went into the house and shot their 12-year old daughter.

Dillon lay there until late that night when he heard a neighbor passing by with his horse and wagon. Dillon yelled for help. The neighbor came on the bloody scene and rescued Dillon.

However, Dillon died four days later.  In those four days, he gave his account of the murders and identified Culbertson as the murderer.

Culbertson was caught, arrested, tried in Williston, found guilty and sentenced to life in prison.  Before he could be shipped to the prison in Bismarck, a mob overpowered the sheriff. It was reported that he did not even draw his sidearm because of the many guns the mob had pointed at him.

The mob broke Culbertson out of jail and dragged him to the edge of town.  They took him to the bridge crossing the Little Muddy River and hanged him.  Then, they used his body for target practice.

Murder on the Hart Farm, “What a terrible thing I have done.”

About three years later, a man who went by the assumed name, “Guy Hall” jumped off the train at Ray. He had just escaped from the Washington State Penitentiary, then grabbed a ride on a freight train headed east through North Dakota.  Ray is as far as he got. He walked back west three miles, halfway between Wheelock and Ray. There he hired on at the A.M. Hart ranch do to chores when Mr. Hart was not home.

The 22-year-old man must have been a charmer because he romanced the eldest Hart girl against the best wishes of her parents. The Harts were vocal about their opposition to Hall because he drank too much.

A few days after Christmas, December 1915, Hall drove to Ray to pick up his girlfriend and her sister from a relative’s home, the McFarlanes. He took them back to their farm between Wheelock and Ray.

At gunpoint, he made them come with him into the farmhouse and up the stairs to a bedroom.  There was the body of their mother whose head had been bashed in with a crowbar. He locked them in with their dead, bloody mother.  The daughters testified Hall said, “There she is. See what a terrible thing I have done.”

What they did not know at the time was the bloody, bludgeoned bodies of their two brothers were outside.  A coroners report wrote that Hart used the crowbar to beat them over the head from behind then hid their bodies in a haystack.  Roy Hart was 13 years old, and Vahn Hart was 9. Hart kept the two girls locked up in the bedroom with their dead mother until the next day when he came back with the revolver and forced them into a car to go back to the relative’s home in Ray.

“He kept the girls prisoners in the ghastly death chamber nearly all night when he ordered them into a vehicle and began a wandering drive that ended at the McFarlane home in Ray.”

“Please forgive me, for I am insane”

Hall and Mrs. McFarlane struggled over the revolver. He broke free, ran upstairs and shot himself.  Ray police officers were immediately on the scene. They ran upstairs and found Hall’s dead body — a bullet through his head.

The police jumped in their patrol cars, sped to the Hart Ranch.  There they found two notes in the dead woman’s mouth. “This is the beginning of my finished work of crime. Bruce Parkinson, alias Guy Hall, escaped prisoner of Washington State reformatory.”

“Please forgive me, for I am insane. Guy Hall.”

Hall was buried in a Ray cemetery. One of few residences we could find in town.

Wheelock has been on a downhill slide ever since the 1950s.  A few attempts at cleaning up and building up the town never seem to get very far.

Epping, the little town built from those who could not afford Wheelock, is still functioning.

To the east, the towns of Ray and Tioga thrive in the new economy of oil.

Death has centered on Wheelock. Each time we return, it’s less and less of a residential collection of homes, and more of a ghost town.  People from elsewhere who visit say they feel “creeped out” by the town.

Some write of their visits as being very quick because they felt an evil presence in town, they say.

What is your experience when you visit Wheelock?

Ready for a story about a body floating downriver on ice?  It’s a haunting that came from a double-murder and lynching.

That creepy story is told from 60 miles further west, the gruesome murder and lynching at Mondak.

Subscribe in the upper right to get a note in your inbox when a new article is posted on Beautiful Badlands.  Coming up, a story on the Highway 85 Long X bridge about to be torn down, the state’s first-ever Renaissance Fair, and suggested readings of books to escape the cold.

Free to those who subscribe: twice a month subscription to the Beautiful Badlands newsletter, a short overview of what’s popular, what’s happening, and what you can see.