A cool wet September morning…and a traveling pair head west to the trading post they heard about.  That’s because word reached them in their homes farther east that this was the weekend of a good gathering at the Fort Union Trading Post.

Tempted to Travel back in Time

This fur trading post on the upper Missouri provided peaceful trade between traveling frontiersmen, trappers, traders and Native American merchants. Craftsmen from the Assiniboine, Crow, Blackfeet, Ojibwa, Mandan, Hidatsa, Arikara and Sioux nations all traded at the post.  From the days of Lewis and Clark until the Civil War, this cultural and economic nerve center in the middle of the North American Continent was a gathering point for nations and cultures.  Now, as the mild-mannered explorers learned, history is repeated by willing enthusiasts.

Earlier in the year, the couple spied the trading post from across the Missouri River. It sits near the major transportation intersection of the Missouri and Yellowstone Rivers — the confluence.

The water was up; the distance was great, so they didn’t try to ford the river or cross at another point. Instead they vowed to return when they were within range.  That day was the first Saturday in September.

West of Watford City and east of Sidney, the couple navigated the 25 miles of back roads and watched for signs of the trading post.  “Turn north and follow the river,” she counseled him as her finger traced a route on a series of maps. He directed the surefooted horsepower in the direction she pointed.

Her route led them around bluffs and buttes until they found the trading post and drove east, crossing over the state line into Montana. That was a visit of mere seconds into Montana because when they followed the roadway, it doubled back.  That led them to enter the compound from the west just inside Montana. 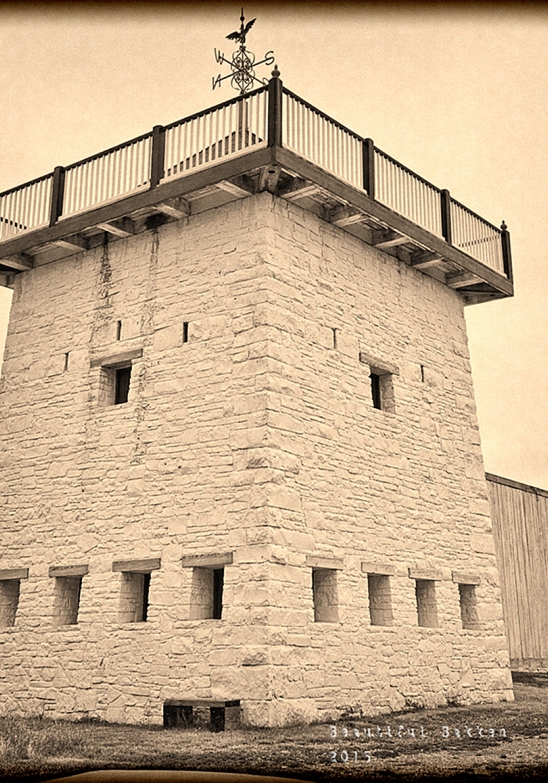 The southwest bastion was designed for defense. George Catlin used it as a studio in 1832

They crossed the low-lying spaces below the trading post.  There, down below the trading post their time was one hour off.  This low-lying area is in mountain time zone. But, it changed as they walked the rise up in to the structure. That’s where they returned to central time zone. They stopped to look up at the tall tower and wind vane, the same one they spotted from across the river. Now, it rose above them as they entered in through the garrisoned walls.

Once inside, they turned to look back. There, at the entrance another couple discussed their evening plans for socializing, food and sleep at the trading post. 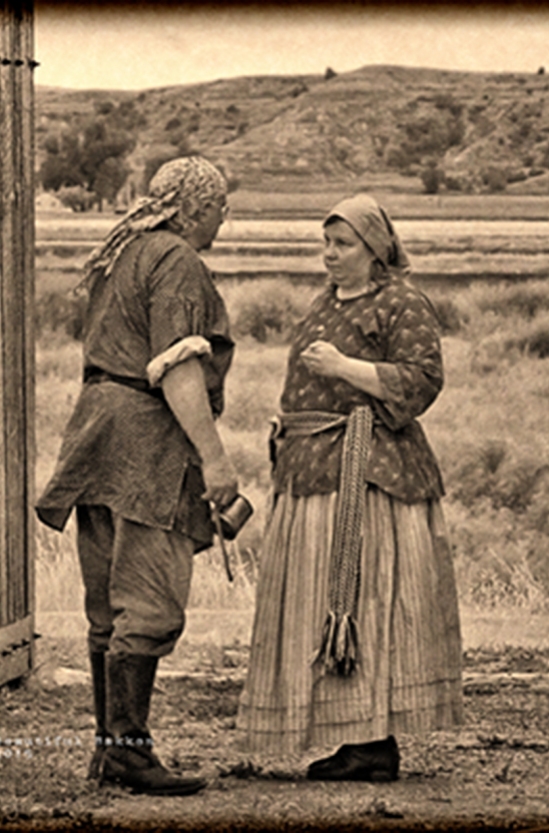 A couple of travelers meet at the main gate and entrance of the trading post.

Across the entrance, an attractive young woman navigated her way across the muddy grounds. Frog-drowning rain the night before had left a lake in the compound and more rain was expected.

At this moment, water slowly seeped in to the ground, leaving behind soft mud bridged by strategically placed planks. 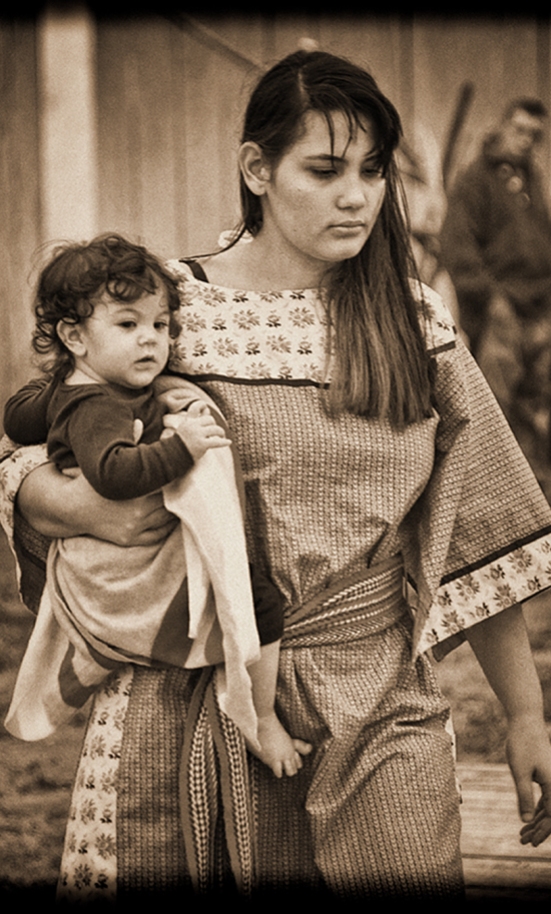 Families at the Fort

Despite the mud and rain, families moved about the post freely, playing and enjoying the social event. 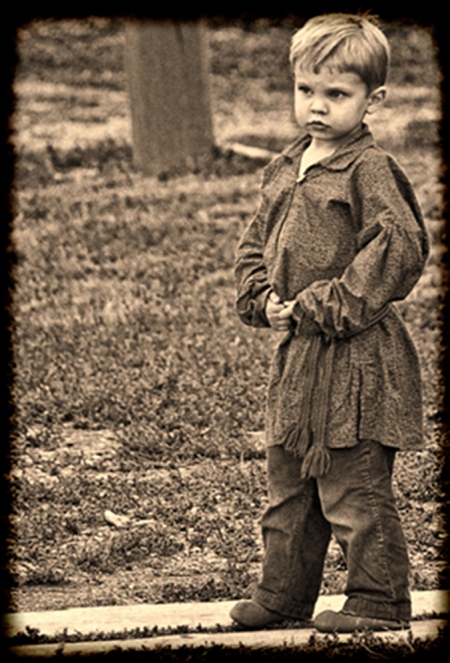 As much as the trading post is about commerce and products, it’s also about families and social gatherings. 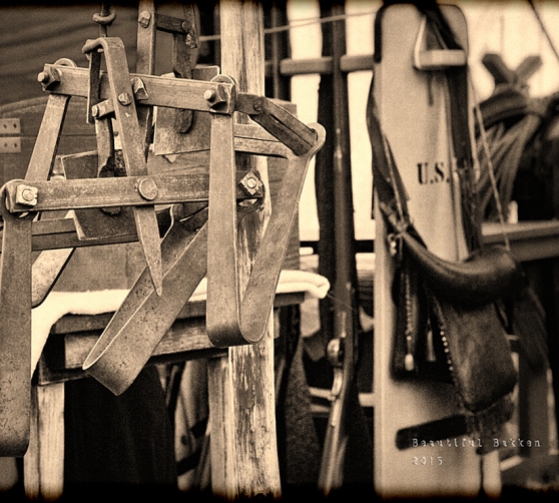 Hardware is beat into useable products, then sold in booths and tents at the Fort. 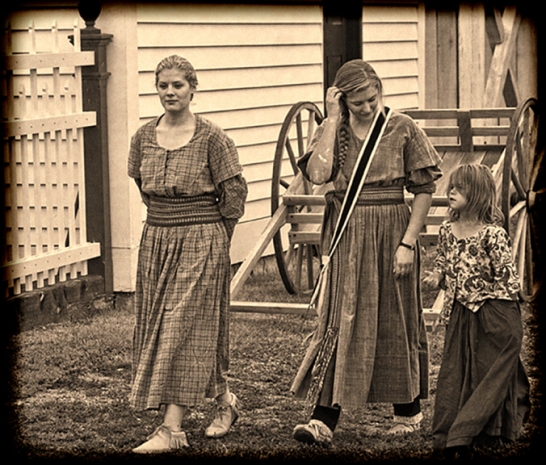 Nearby, buckskinners took shelter in the warmth of the trade house at the entrance of post.  It was a warm break from their usual struggle for existence where every day, and every moment in the day is spent trying to survive the wilderness. 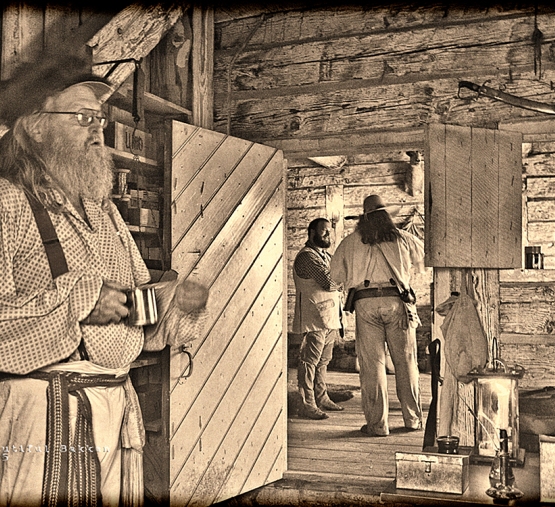 Inside the west Indian Trade House, a fire keeps visitors warm and dry.

Here is where ledgers, inventories and business records are kept.  It’s also the room where important meetings with visiting tribal merchants could strike a deal. A fire crackled in its work to ward off the damp chill of the day.  “We meet here as often as we can,” the older trader told a visitor while he nursed his precious hot coffee.  “We’re happy to have visitors like you.  We like to swap stories and share our adventures.” 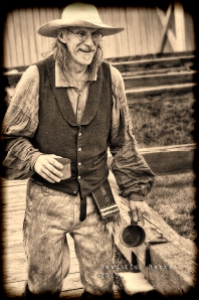 The old-timer’s words were demonstrated;  a gathering and multiple conversations were housed on the front porch of the Bourgeois House. 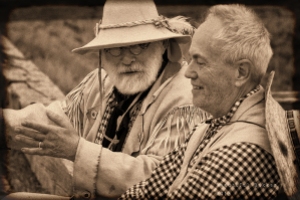 It’s where the field agent lived in 1851 after a smaller building was enlarged into this two-story house with a porch. 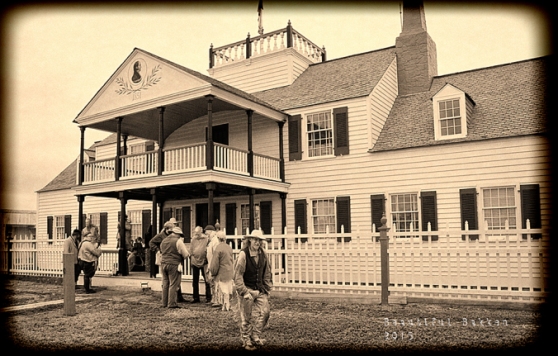 Just outside the palisades, young marksmen prepared his muzzleloader. 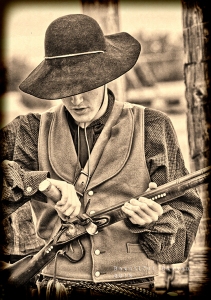 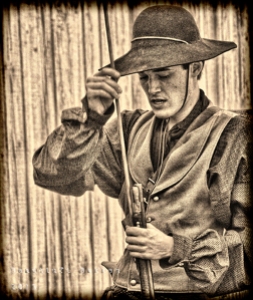 His target, down by the river, was out of sight at the moment.  By the time he got his shot ready, the target would be visible again.  His efforts attracted the attention of friends and strange visitors.  After a couple of misfires, his shot echoed across the valley. 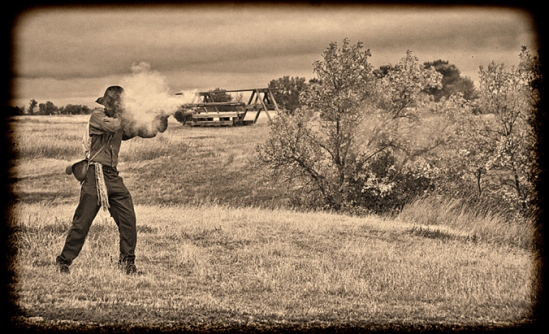 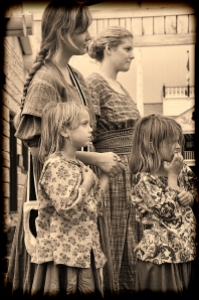 Spectators watched the shooter demonstrate his skills. Others chose to stay inside, including a small gathering of men who sat and swapped stories.

The trading post provided a chance to not only swap goods and stories, but to kick back and relax. 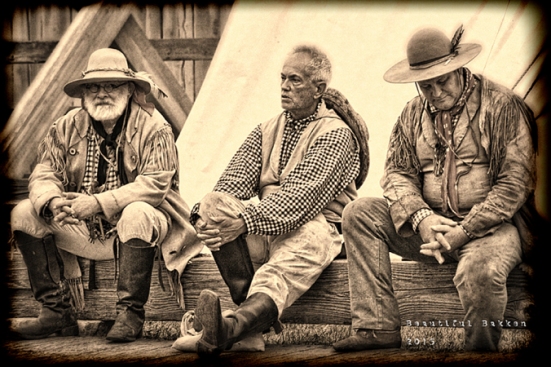 The visitors who had come so far to visit the Fort Union Trading Post were warmly received and learned much from this annual gathering. 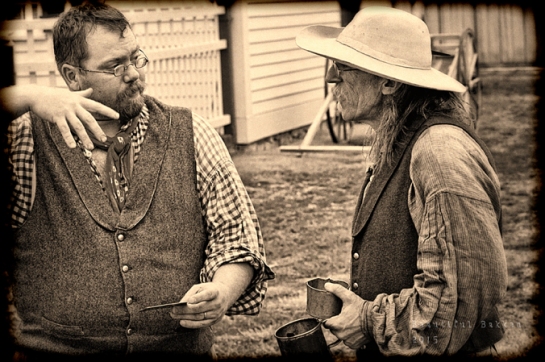 The visit extended until nearly sunset when the gathering broke up. People headed to their lodging for the evening, some outside the post, and some farther down the river in more civilized settlements.

The mild-mannered explorers stashed and stores their memories — some by camera and some by intellect.  They knew they were going to return to the Fort to travel back in time once again — and often.  The overseers of the Fort Union Trading Post welcome visitors and there is no charge to wander inside the palisades, shop in the store, or browse the library.  It’s all free.