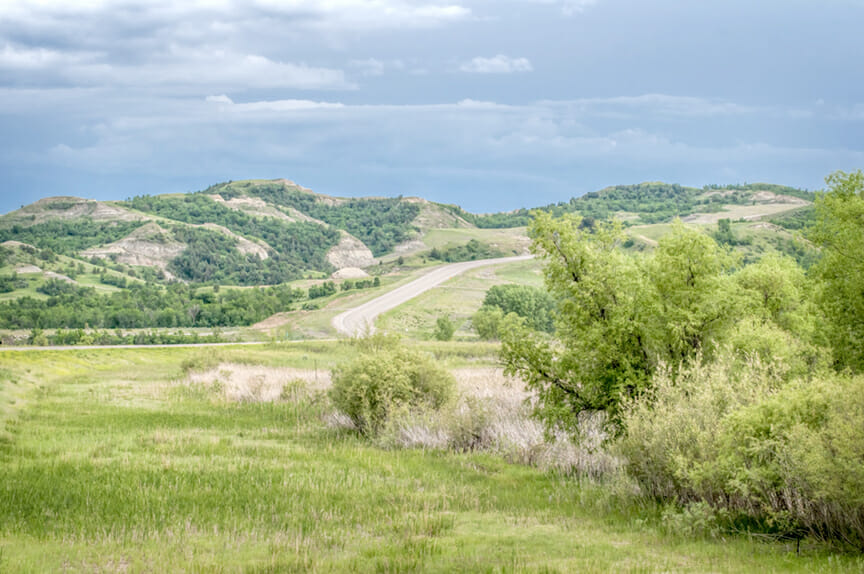 A road trip through three worlds 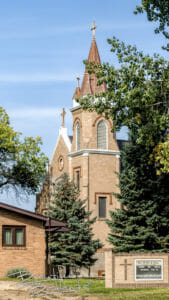 Get on North Dakota Scenic Highway 22 at Dickinson and head north.  Spring and summer are best for this road trip, but a road trip in autumn will give you an experience in color.

The first third of the trip is prolific cattle country in rolling pastures.  The region has a strong Ukrainian and Bohemian culture.

The second leg of the trip plunges you right into the most rugged region of the North Dakota Badlands. Ranch families here can trace their rugged independent rodeo and cowboy lifestyle back to the mid-1800’s. 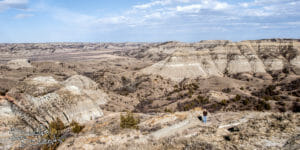 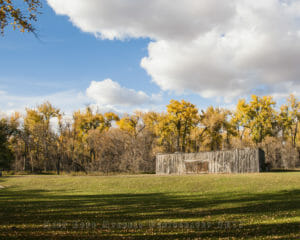 The replica of Fort Mandan is on the Missouri River north of Washburn. It is where the Corps of Discovery met with and worked with the Mandan and Hidatsa people from here north and west through the Badlands.

The third leg has a history that goes back even further, back hundreds of years.  It’s the home territory of the Mandan, Hidatsa, and Arikara people.  In 1804 and 1805, the Lewis and Clark Corps of Discovery extensively documented this settled region.  The Explorers wrote of the business-like culture and hospitality of these indigenous people.  The three separate nations banded together to create a strong defense against other hostile tribes and nations.  They formed what became known as the Three Affiliated Tribes.

The Dividing Line into the Third Leg 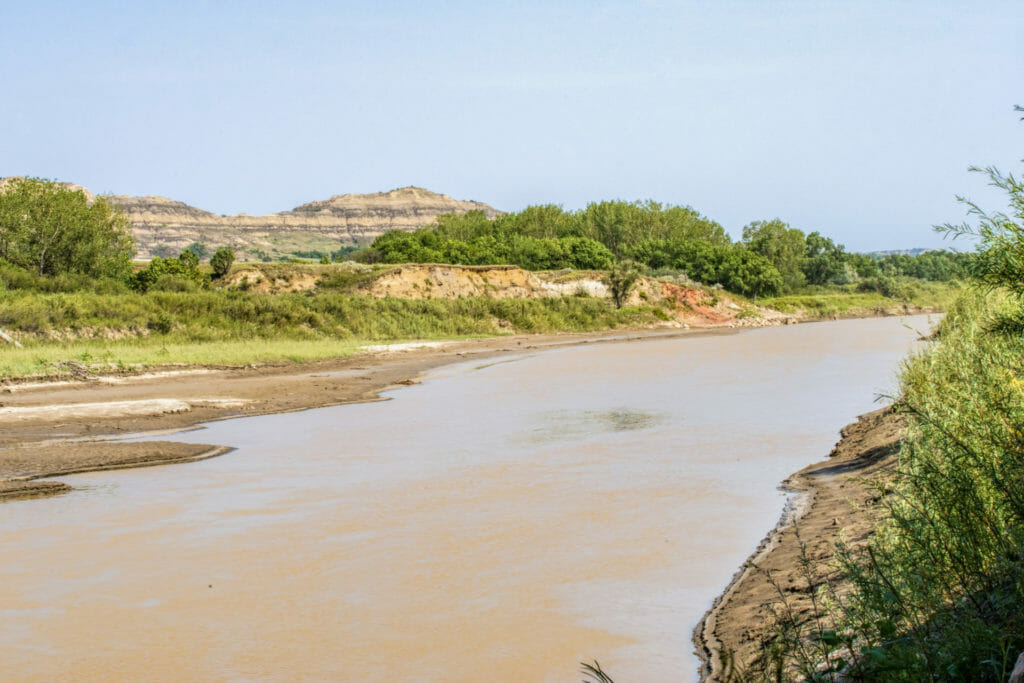 Less than 10 miles from where the Little Missouri River finishes its cut through the North Dakota Badlands.

You’ve been driving in their homeland for many miles by the time you reach the Lost Bridge and the Little Missouri River.  Crossing the river, you enter the Fort Berthold Indian Reservation which is just a fraction of the historic home of the three tribes.

Look to the north and west when you cross the Little Missouri River on the Lost Bridge and you’ll see much the same virtually unchanged view of the Badlands that others have seen for centuries.

Today, we pick up this road trip of 10 stops on North Dakota Scenic Highway 22 with stop Number 8.  (Stops 1-7 are described here, and here.) 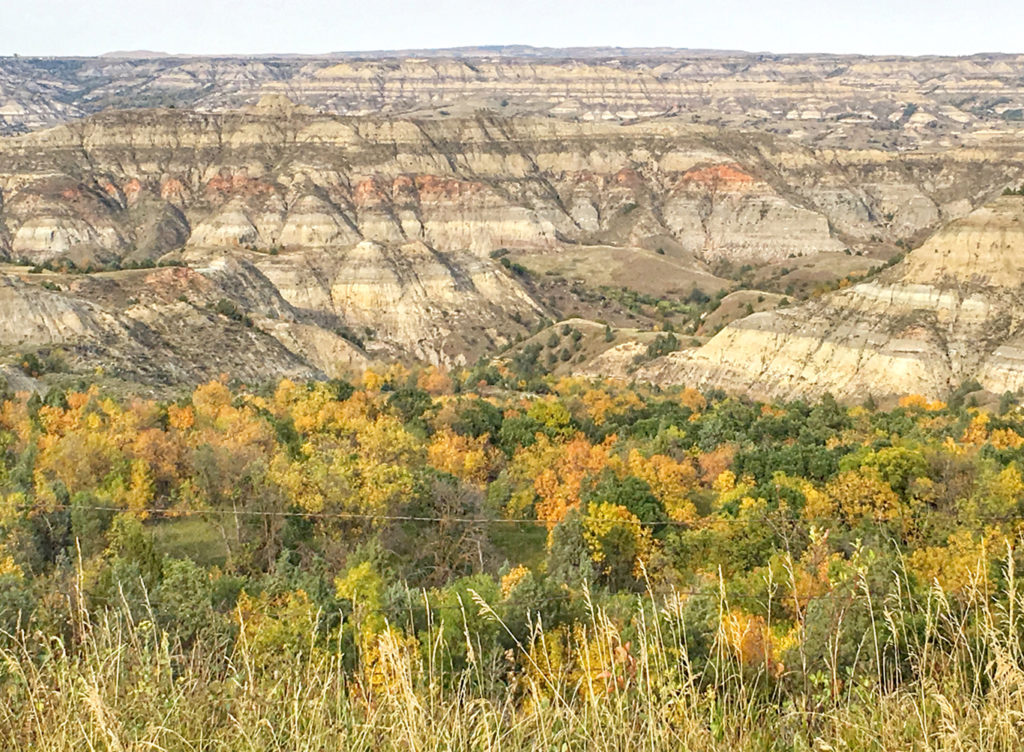 Autumn leaves are beginning to show their colors in mid-September at the Little Missouri State Park.

Over time, erosion has removed a huge amount of sediment. Approximately 40 cubic miles of sediment have been eroded and carried away by the Little Missouri River from the area that is now the badlands. Most of that sediment now lies beneath the water of the Gulf of Mexico. —John Bluemle   North Dakota Geology

That union of the Big and Little Missouri Rivers is just a dozen miles east of this crossing at the Lost Bridge. The layers of earth exposed by erosion include the red “scoria” of charred fragile burned clay. Lignite coal deposits are the black stripe through the face of hills. To the east, the rocky hills have been called Rattlesnake Hill by locals, a good place to encounter the venomous reptiles.  This rough terrain is where at least a few mountain lions are shot each year during the state’s short mountain lion hunting season.

You enter the Fort Berthold Indian Reservation when you cross the Little Missouri River.  This land has always been home to the Mandan, Hidatsa and Arikara Indian Nation.  As solid and firm as the landscape, these people withstood the wars and battles that date well before European explorers and the Corps of Discovery who came through here. Later, they maintained their place in the years of the U.S. government’s attempt at resettlement.  Today, they’re reaping the one-time harvest of oil on their land. 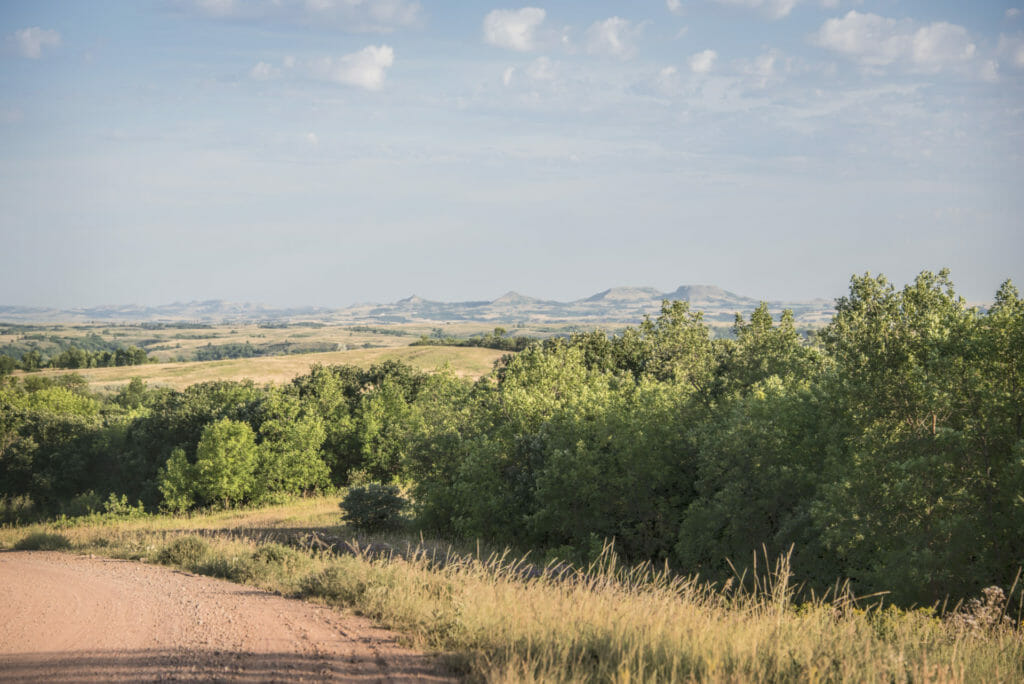 The Blue Buttes are north of Mandaree. They rise about 2700 feet above sea level and are popular hiking areas, especially on the western slope.  Chimney Butte is one of the prominent features and is on public land.  If you choose to get out and stretch your legs on this road trip, first check your Forest Service map to be sure you do not trespass on private land. 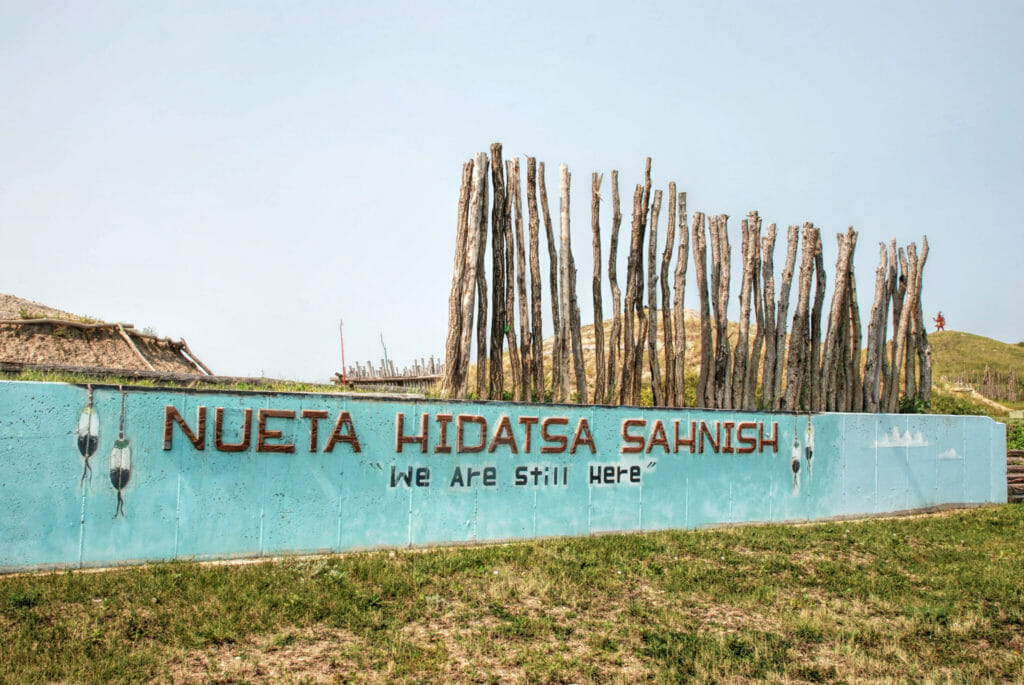 At the intersection of Scenic Highway 22 and Highway 23 turn east toward New Town.  Before you reach the Four Bears Bridge, you’ll come to the historic Earth Lodges. The MHA nation has restored them for spiritual activities and for welcoming visitors to the traditional lifestyle. This is sacred ground to the people, a place to be respectful. The early way of life illustrated here kept thousands of families intact with gardens, wild game and economic trade with other people. 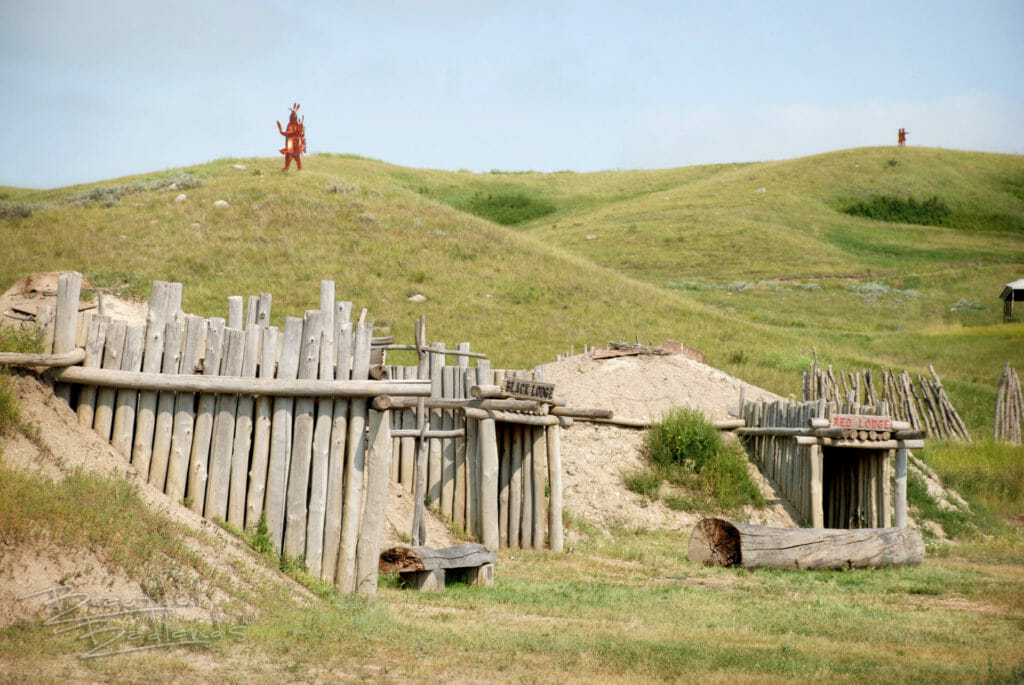 The earth lodges are the last cultural stop on the Scenic Highway 22 road trip that began in Dickinson. 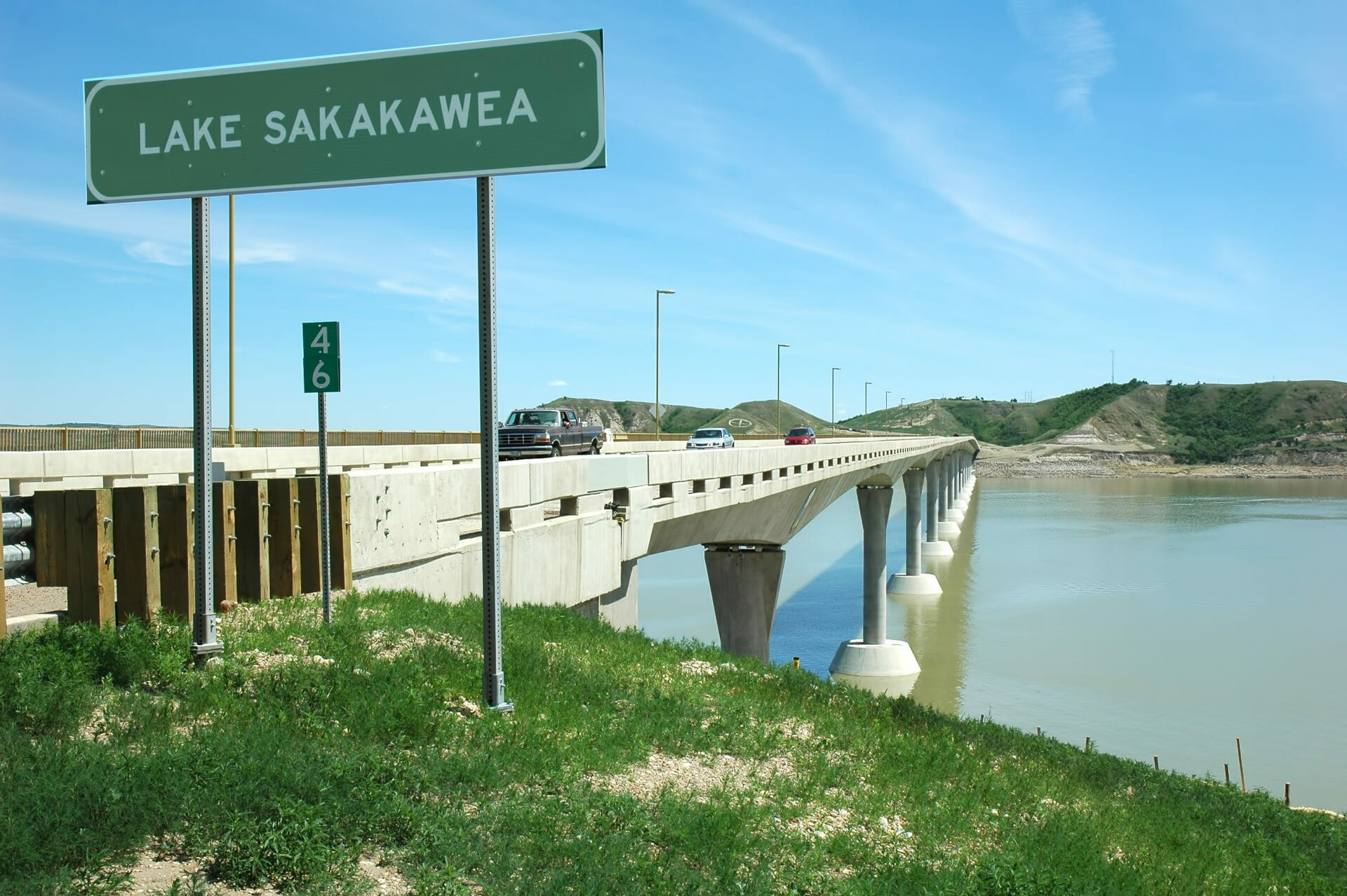 Here is the exit point of this long scenic and historic route through the west. The Four Bears Bridge links two sides of the state, two counties, and two cultures.  On this road trip, it is the bridge back to the rest of the state. 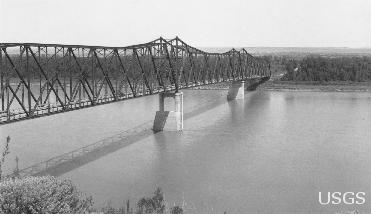 The Four Bears Bridge at Elbowoods crossed the Missouri River, connecting the northern and southern halves of not only the state, but of the Fort Berthold Indian Reservation

The original Four Bears Bridge stood at Elbowoods, North Dakota until the government flooded the valley, the towns, farms, and ranches along the river.

The intentional flooding displaced people, mostly, but not only those of the Three Affiliated Tribes. Millions of acres of rich gumbo farmland, timber, and history were covered by the building of the Garrison Dam and Lake Sakakawea.

The government dismantled the original bridge and moved it to this location near where the Army Corps of Engineers plotted a new town. That town the Corps plotted kept its name, “New Town.”  Since the bridge was built to 1920 highway standards, it could not accommodate today’s modern traffic. It had only two eight-foot wide driving lanes, curb-to-curb, no shoulders, and no walkway. 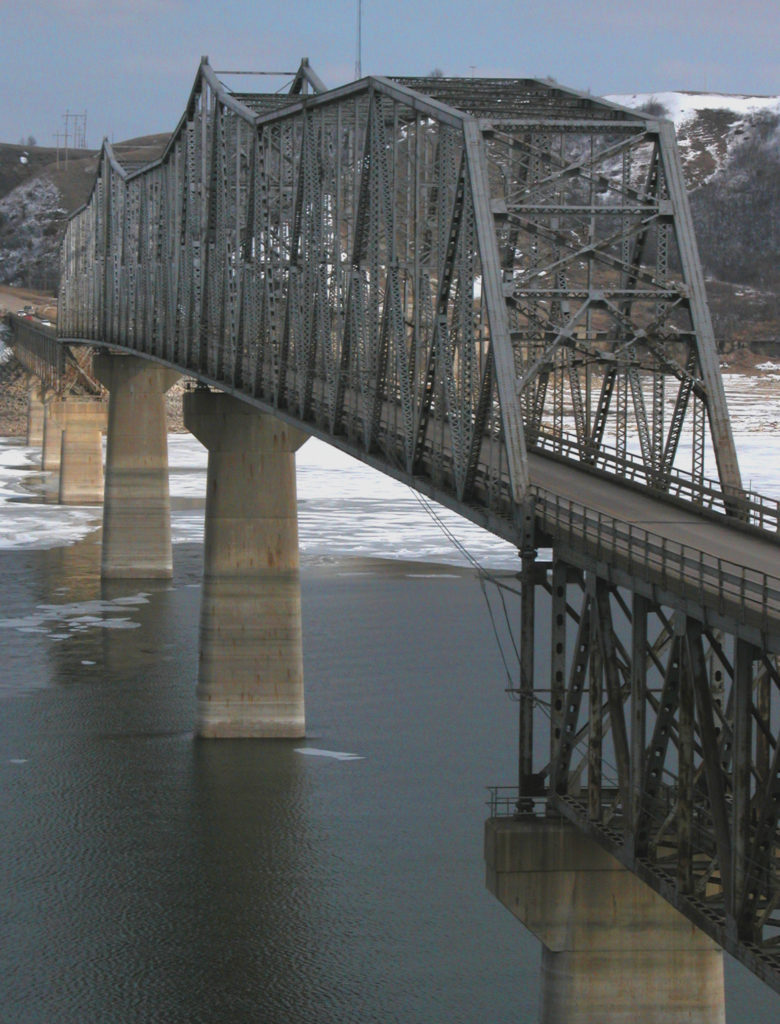 Dismantled at its first site, the Four Bears Bridge was rebuilt at McKenzie County to reach the opposite side of Lake Sakakawea and Mountrail County.

The current bridge with two 12-foot driving lanes, 10-foot shoulders and a walkway – the first walkway ever to give pedestrians a way to cross the river.  Along the walkway are pictorial signboards memorializing the Mandan Hidatsa Arikara Nation.  It is a world-class structure and has won numerous international awards for its context-sensitive design.  The west end park includes the history of the bridge and the region.  Mounted on pillars are the original bridge portals or openings. You can get an idea of how narrow it was. 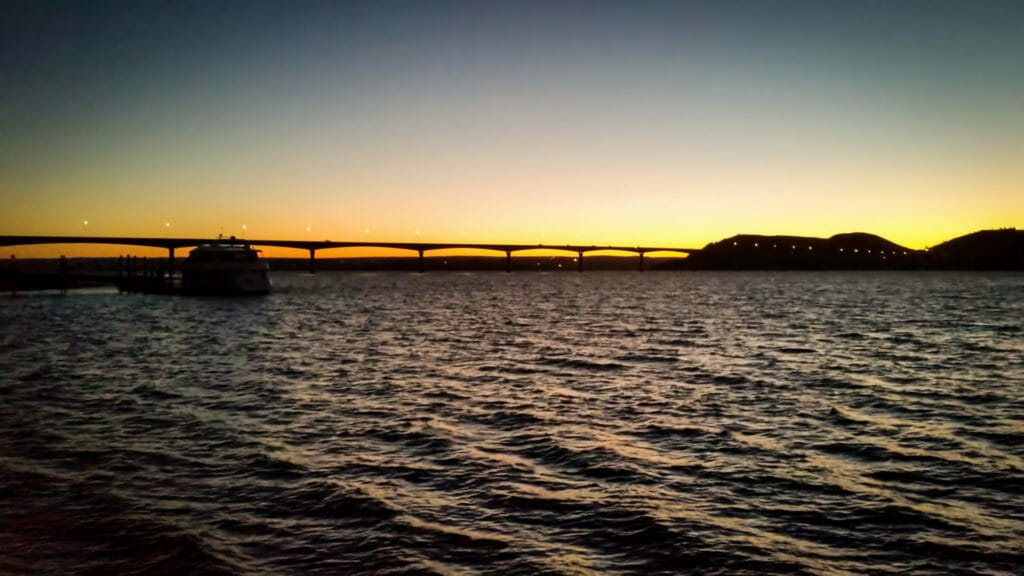 Once at New Town you can celebrate your passage through culture, history, nature, and architecture with a meal at the Four Bears Casino or one of the restaurants in New Town.  From there, head east to get back to Highway 83 to get to Minot or Bismarck.  Head west to Highway 85 which connects Watford City and Williston.  Repeat this drive in another season; it won’t be the same. You’ll see marked changes on Scenic Highway 22 the Killdeer Mountain Four Bears Scenic Byway.

The Mandan Hidatsa and Arikara people have long worked with the U.S. Army as scouts from the time of Custer to today in Afghanistan.  Read more here.

An album of photos, available for purchase, of the earth lodges of the MHA Nation is found by clicking HERE.

You can get a glimpse of the Killdeer history at this link.

One of the most eloquent descriptions of this region, called The Badlands of North Dakota was published in Cowboys and Indians Magazine.

The original Four Bears Bridge crossed the river at Elbowoods, a town that is now under water.  Here’s more.

Stay tuned for more insight and inspiration from the North Dakota Badlands by subscribing to this blog. The subscription box is in the upper right.

You can follow us on Facebook where we keep continual coverage of all things North Dakota Badlands.

This winter, we’ll be speaking at local community service club meetings about how to find the beauty in the Badlands.  Join us there, or invite us to speak at your event.