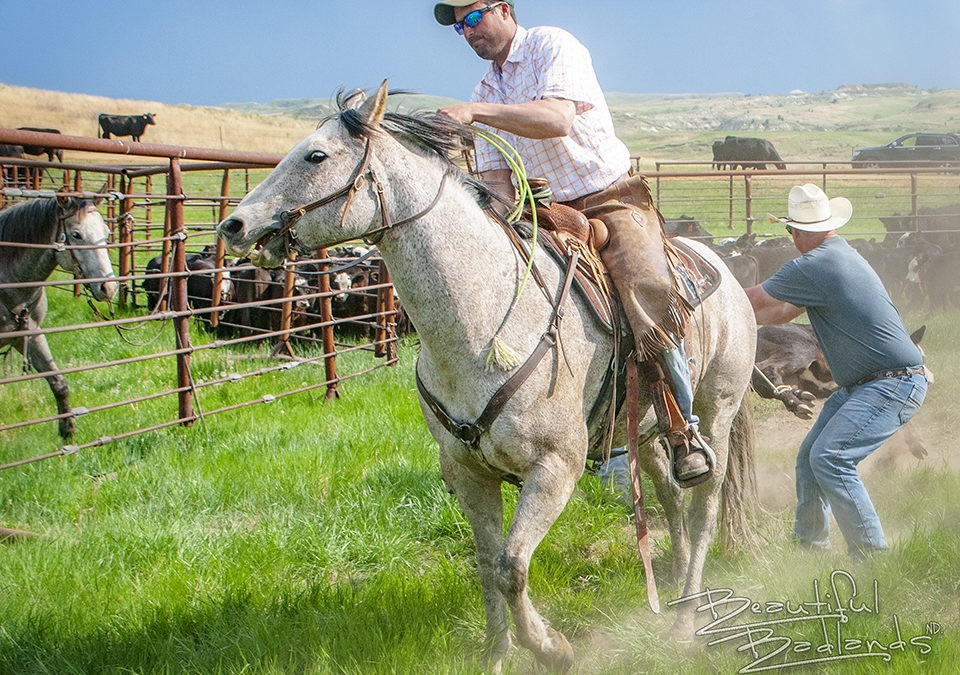 A surprising find can reward you when you get off the beaten path.

You know what it feels like to have a bug urging you to step away from the crowd to see what else is just around the next bend?

That’s how we ended up with cowboys on a cattle drive — off the beaten path. 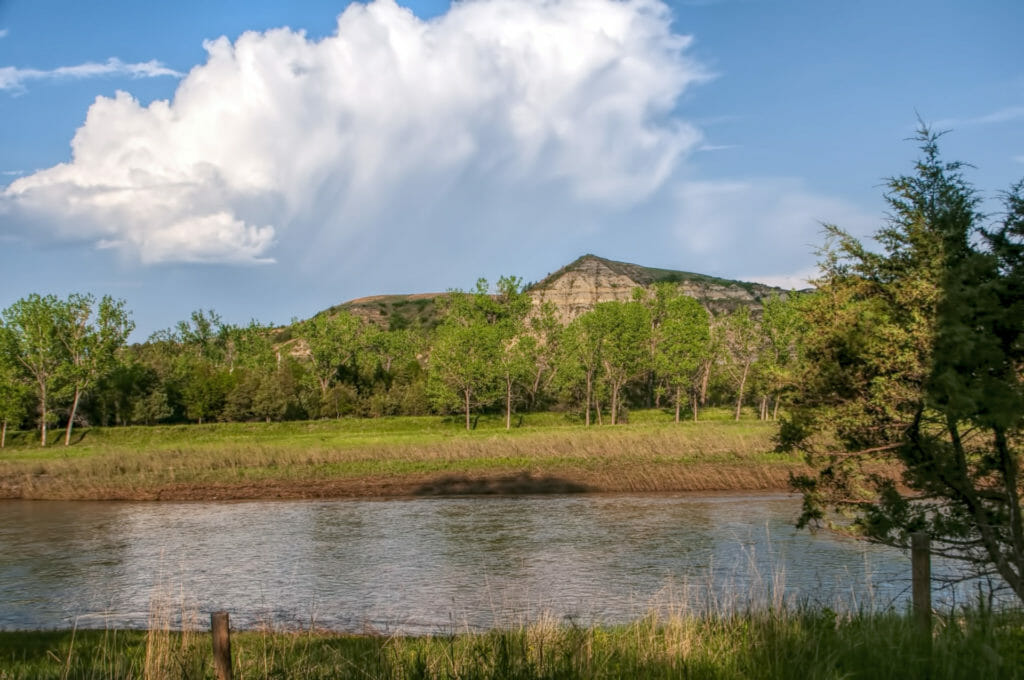 From T Roosevelt’s Elkhorn Ranch, across the Little Missouri River, the face of the hill he often wrote about — and storm clouds to the east many miles. They look like they are almost overhead.

The day turned out to be one of those prefect summer days, good temps, good sun, light winds. So we took off looking for a different route to get to the Elkhorn Ranch, one of Theodore Roosevelt’s ranches. We usually follow the recommended route, but this time we wanted to see if there was a different route that may be just as visually spectacular. A sense of unexpected adventure fueled our explorations.  We’re fortunate to have each other – both willing to discover new things.  Sound like you?  Discover new things? Got a partner?

It’s the journey not the destination

So, on this day, under blue skies and puffy white clouds, we headed north.

However, this time, our route to Elkhorn Ranch was a little more east than usual, still on the west side of the Little Missouri River. I’m a firm believer in the idea that every road has to go somewhere, and it’s the going that is the fun part – you know, the journey not the destination.

The U.S. Forest Service map is our guiding light. It is our north star to find our way on two-track trails, gravel roads and hidden gems. 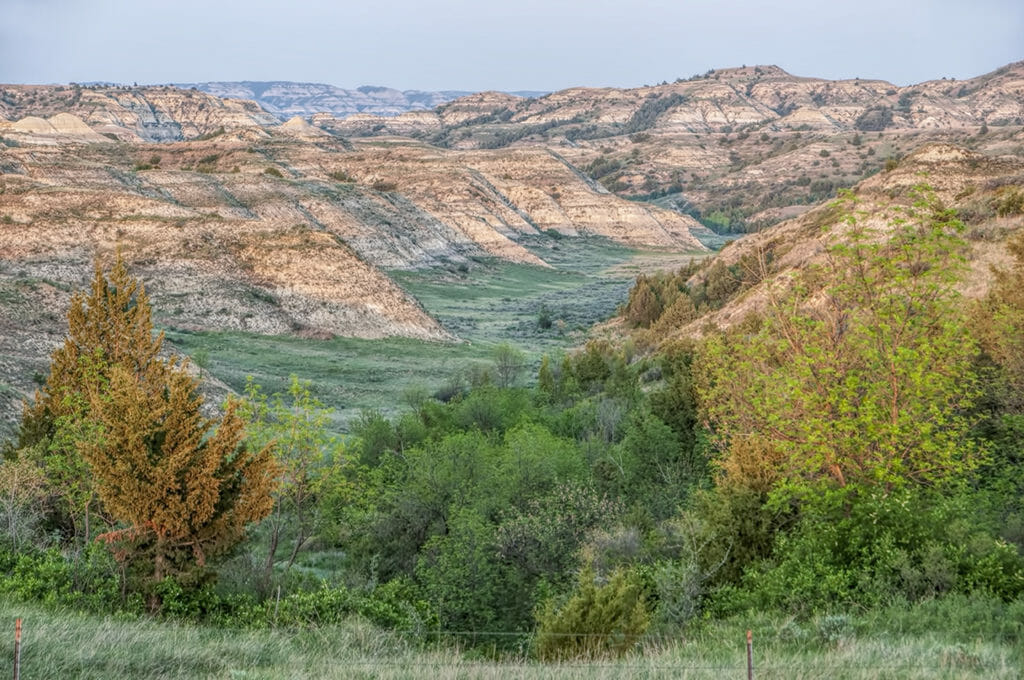 That’s the place where Theodore Roosevelt called home in the Badlands.  His “Maltese Cross” ranch was south of Medora.  In the other direction, about 25 miles north of Medora is the historic site of the Elkhorn Ranch. Thankfully, the National Park Service and the North Dakota Historical Society preserved the site.  However, the buildings are gone. (Word is neighboring ranchers took the lumber to build their own buildings after Roosevelt had shuttered the ranch. )

We like the Elkhorn Ranch because it’s easy to see why Roosevelt called this home.  It has change very little in the 100 years since he settled here to heal from the dual loss of his wife and mother.

After several minutes of this new route, we rounded a curve and crested a hill. Down in the low spot, two pickup trucks with stock trailers angled across the road from ditch to ditch. It was a cattle drive.  A spring roundup.

We slowed down, not sure if we should turn around, or if we’d be able to get through.

So, we crept up to the road block and a cowboy named Ted walked over to us.  “We’ve got some cattle coming this way. You’ll be okay if you drive over on this side,” he pointed to the grassy shoulder next to the fence.

“Sure, Ted said.  “You’ll see them coming over the hills.” 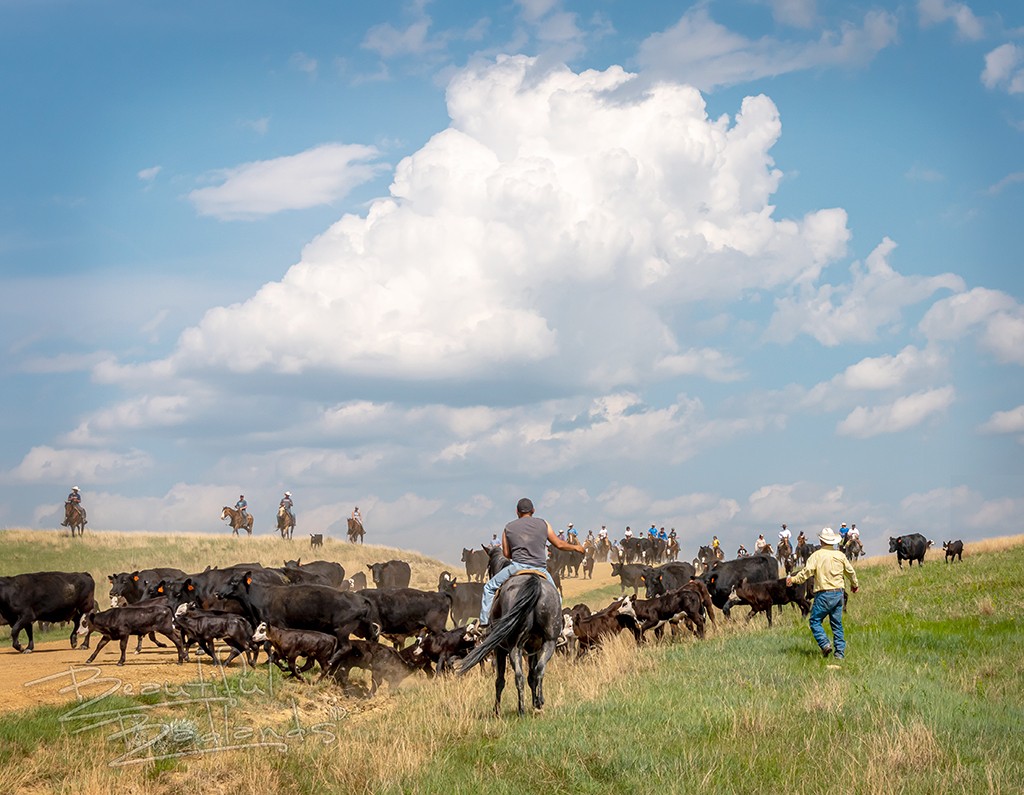 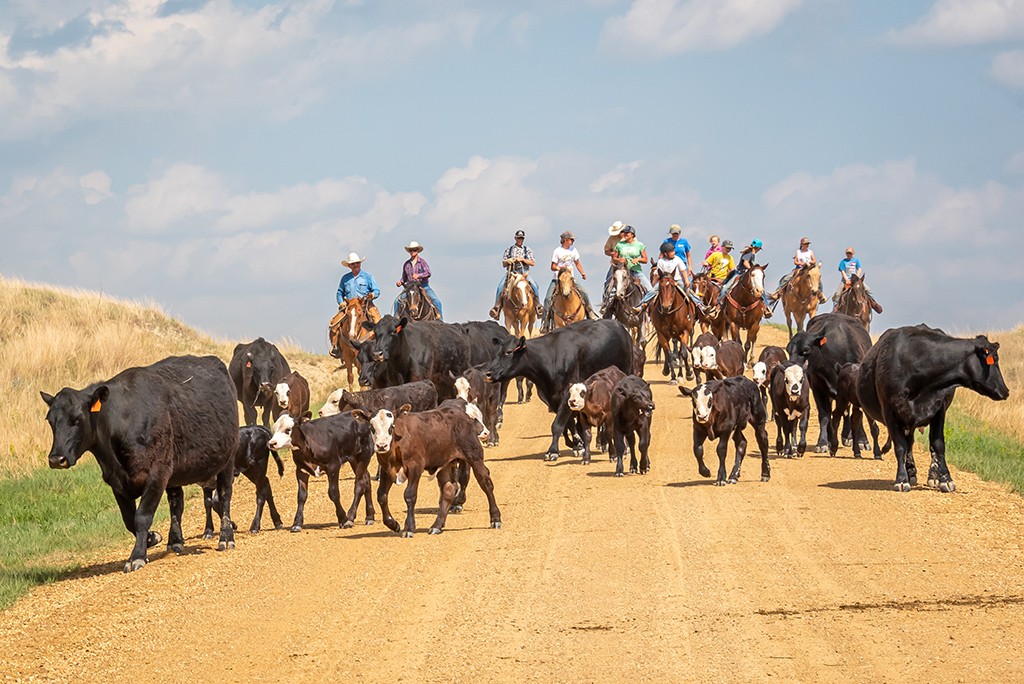 Finally, a few stragglers were rounded up and brought in with the rest of the herd. 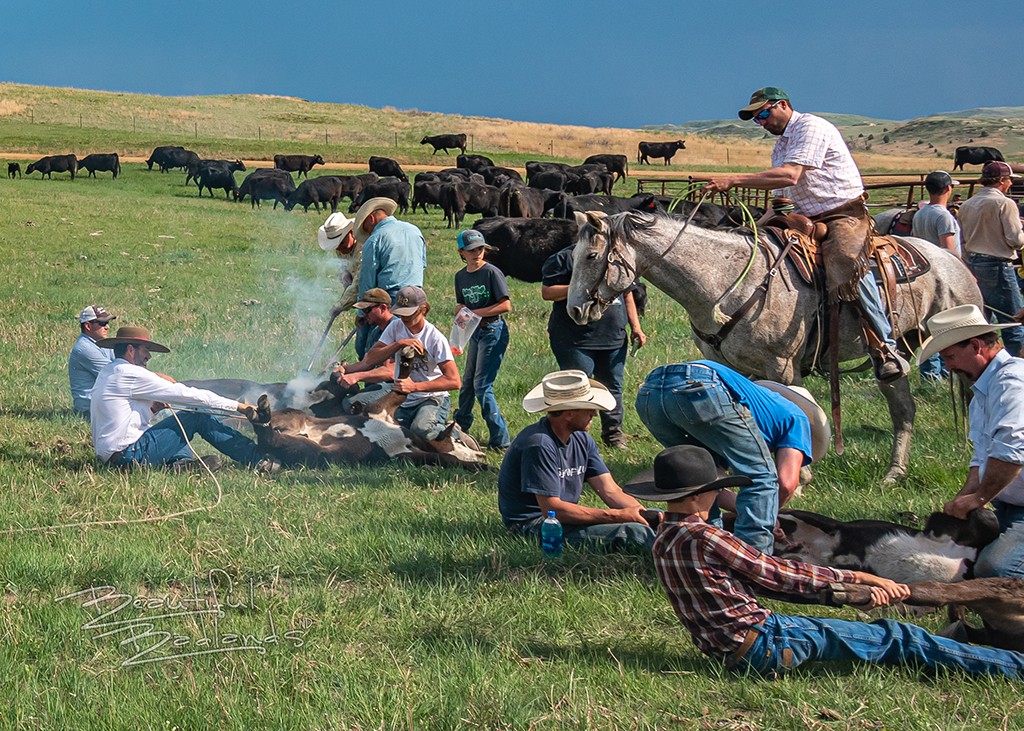 We were’ sure what would happen next. There was no one to ask. All the cowboys and cowgirls were busy moving the cattle into temporary corral. There was no squeeze chute to run the calves into, to hold them while they were doctored.  Nope, this was going to be the real deal. Very labor intensive! 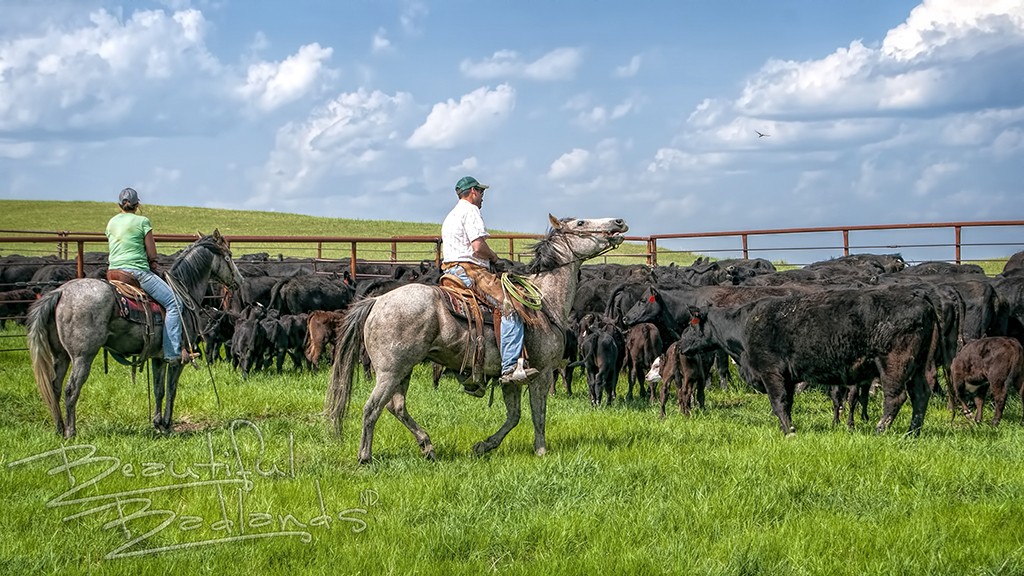 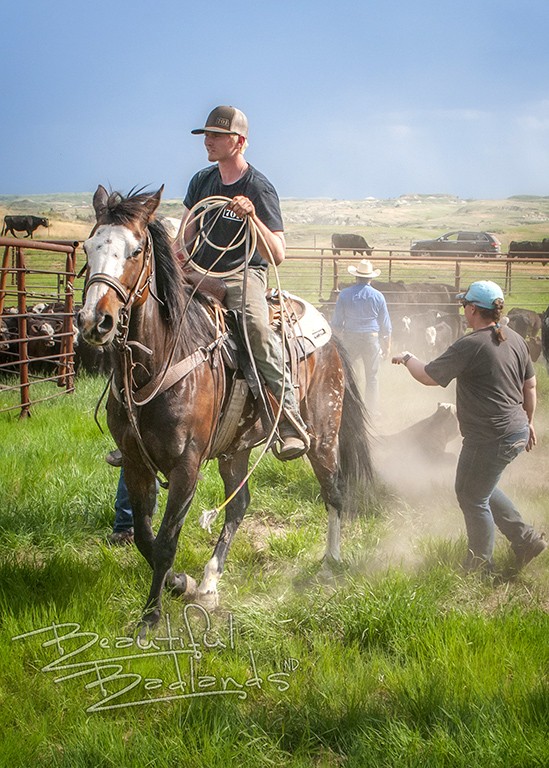 The herd was driven into a corral, and from there, the calves were sorted out.  Meanwhile, one at a time, they were selected and delivered to a waiting crew.  The expert handlers were ready for each calf as it was brought to them.  They were given a quick exam to determine their health and their sex.  They got vaccinated and tattooed with hot irons to permanently singe their hide. 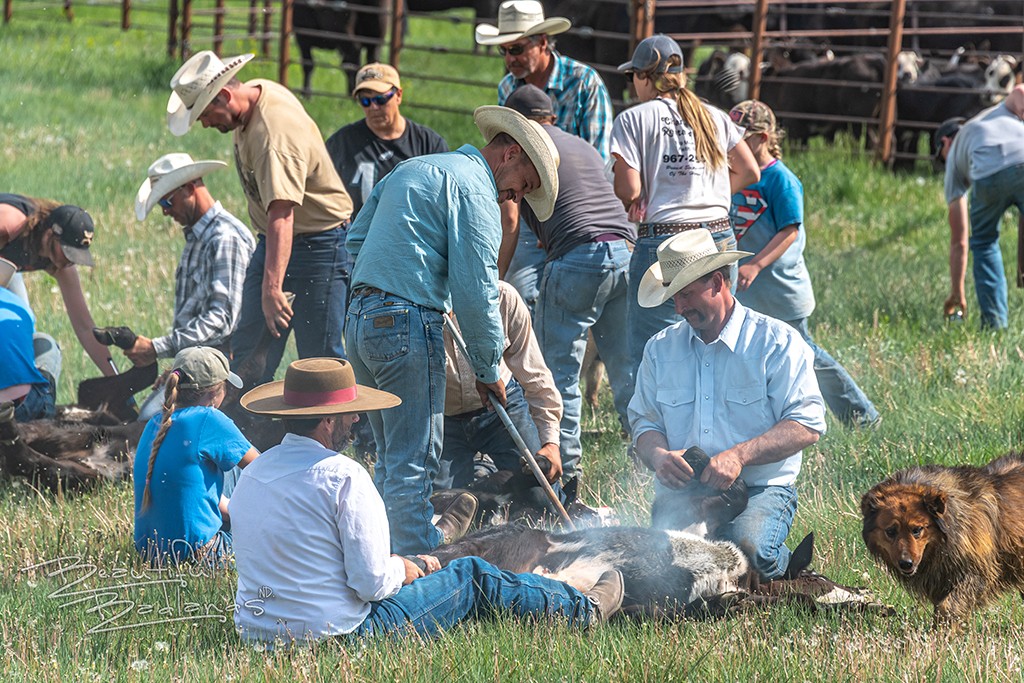 No one shied away from the work.  Men. Women. Boys. Girls.   Each one had a job to do, and they did it.  No K-mart Cowboys here. No painted acrylic fingernails. Everyone shared equally in the work.  Now, that’s equality, isn’t it! Families work together without complaining.  Of course, in cowboy tradition, later in the summer, they celebrated too. 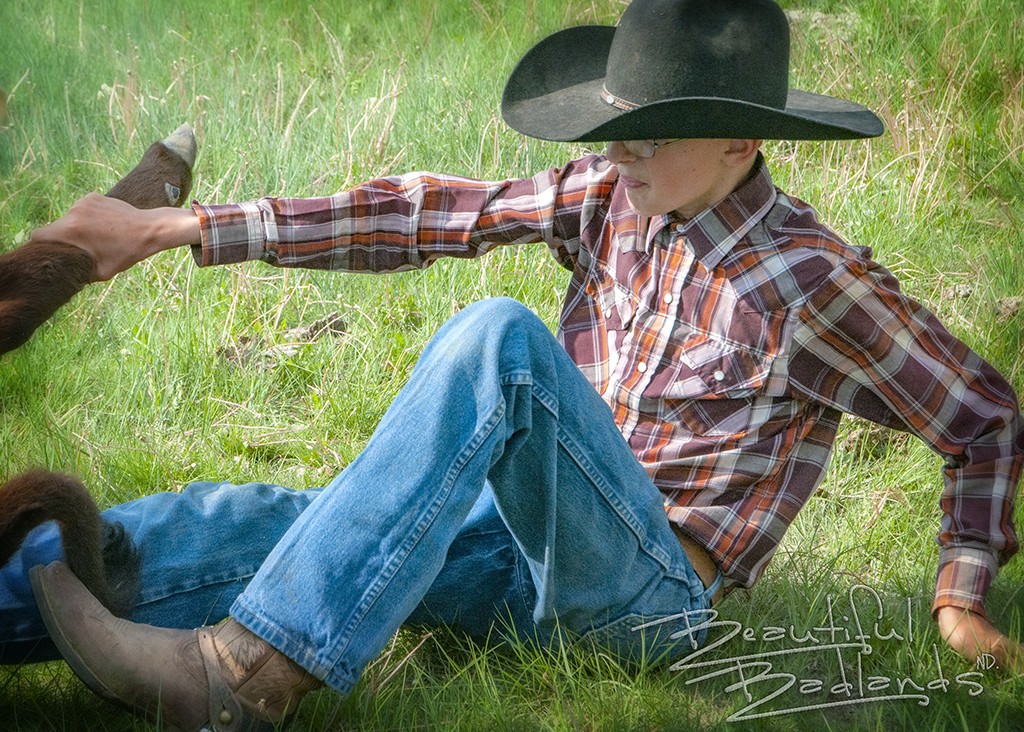 It took two people to hold the calf. One head, one heals.  Cowboys doctored, inspected, and marked each calf.

As soon as the handlers were done, they let the calf loose. It jumped up and ran off looking for mom. 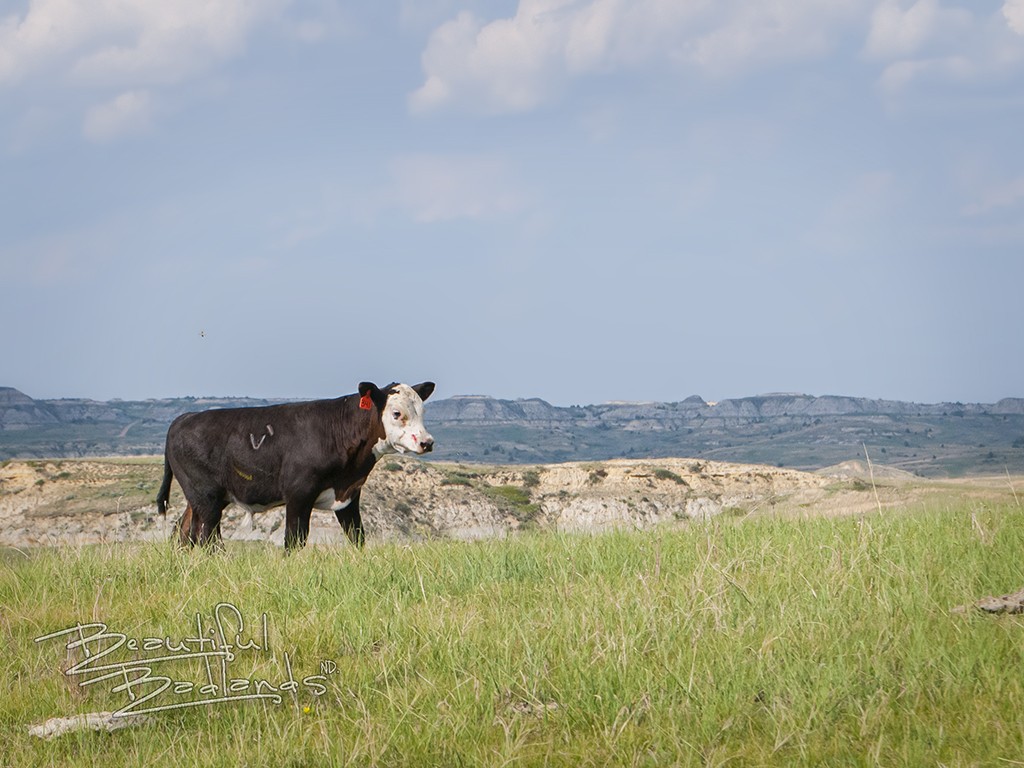 Freshly vaccinated, inspected and branded, a calf wanders out in to the grassy pasture in search of its mother.

I grew up on an Iowa farm and had taken part in several spring calf inspections, vaccination and castration events.  In the early 1980’s I’d done a TV story on an old-fashioned roundup south of Medora like this one.  To say it is incredibly fascinating is an understatement.  There is so much going on at the same time, it’s hard to know what to watch.

The best prize of the day: the people.

Above all, it was the people, the cowboys on a cattle drive who made the moment memorable. They were polite, friendly, hospitable, hard-working.  And there was not a cell phone in site – not even with the young people.  If it weren’t for the sunglasses, and a few wristwatches, there would be no way of knowing if this was 2019 or 1919.  I love to read history, but when it is carried out in front of you, for the umpteenth annual time, it is thrilling. It’s an historic tradition for these families.

Before long, the activity wound down. So, we got back in our Jeep and headed to Elkhorn Ranch. It was an anti-climatic journey off the beaten path.  The sound of the bawling calves in our ears, the taste of dust in our mouths and the visual color and activity repeated itself endlessly over and over.

After we got home, we returned the favor to the cowboys and cowgirls at the roundup and we assembled a private gallery for them to access.

For the everyone else, a dozen or more of the images are here.

North Dakota is beautiful and we love to showcase the images of the state in this gallery where you can shop and buy keepsakes, and full size prints.

Follow us on Facebook to stay up to date on all kinds of things happening in the Badlands. It’s a virtual clearing house of Badlands information.  You’ll love the cover video of bison in the snow running down the hill.