Quick! Get out while we have a break in the cold!

This weekend: Winter tips to explore the Badlands

No, it’s not 75 degrees and sunny. Yes, we’ve been locked up while the cold air rages at our doorstep.

Yes. You can take a few minutes this weekend to get out while you can.

The reward: The air is fresh and the snow is deep, but that does not mean North Dakota tourism season over.

A short hike: If you want just a short and rewarding jaunt, head to the South Unit of the Theodore Roosevelt National Park. You might see bison or elk along the road. The road is open to drive to the Wind Canyon overlook for a hike that’s only a few blocks long.

If you have an hour or more: For a bit more time in the exhilarating environment, here’s what we do.  It’s easier than you think.

There are several reasons The CCC Campground and the Long X trail are the best places to get a little winter outdoor time.

Highway 85 from Belfield to Williston is a major federal highway, so we have good luck headed up that highway. Alternatively, we’ll head east across the state on Highway 200. 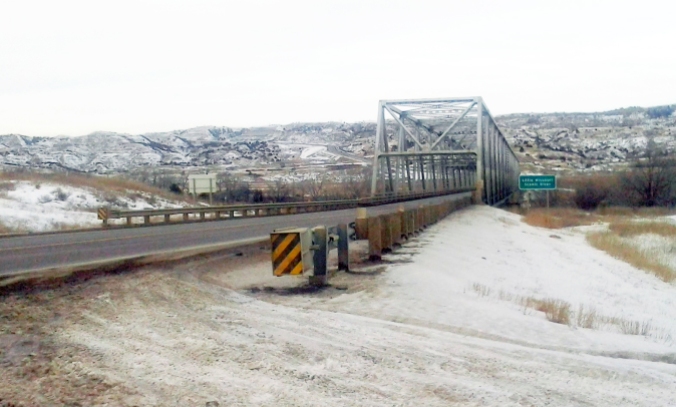 One of the few remaining through truss bridges in the state, The Long X Bridge marks the end of the Long X trail that begins in Texas. It spans the Little Missouri River which begins in Wyoming.

The Long X Bridge won’t be here much longer

Up Highway 85, we always like to check out the historic Long X Bridge2 over the Little Missouri River. It’s south of Watford City, north of Grassy Butte.  The closer we get to the Long X bridge the more we perk up.  It’s an impressive landscape, colorful, striated, and beckoning.   That’s just a hint of what’s to come.

Turn in at the CCC Campground

The entrance to the CCC Campground (CCC is Civilian Conservation Corps, a 100-year old government works program)  is at the very end of the bridge, just a few feet south.  We head west through a rancher’s rangeland pasture.  So, take it easy on that first couple of bends in the road. That’s where cattle are often milling about.

A herd of Charolais awaits drivers headed to the CCC campground and the Long X Trail. Just drive slowly through the herd and all will be well.

2. Along the Little Missouri River

At this section of the river through the Badlands, wildlife officials have stocked and increased the population of bighorn sheep.  They’re not easy to see. The river you drive along started near Devils Tower in Wyoming. It snakes across Montana and North Dakota and empties into the Missouri River about 65 miles east of the CCC Campground.

Mule deer are plentiful in the Little Missouri River valley.

The area is fairly undisturbed since ranching blends in well with the environment.

That’s why it’s easy to see a sample of the wildest of North Dakota’s wildlife — deer and bighorn sheep. 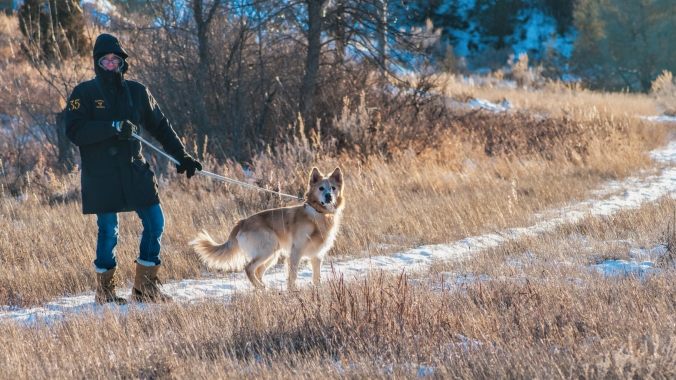 3. The area is well-maintained

There is plenty of room to park.  After we step out of the truck, we pull on our gloves and hoodies.  It’s cold at first, but once we get going, we warm up so that a lot of winter packing isn’t needed.  Here’s where people unload skis, bike or strap on their day pack.  Vehicles are safe, but we lock it anyway and make sure we have the key secured in our inside coat pocket so we don’t lose it in the snow. 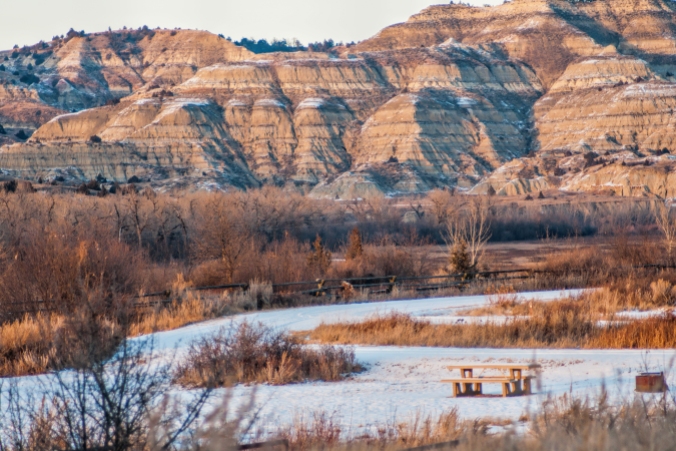 The parking lot and campground is well maintained for easy access.

4. The trail is well-marked

If you decide to hike this trail, you won’t get lost; just follow the tall posts with the angular cut top. Each post is marked with a turtle, the sign of the Maah Daah Hey3 trail. This portion is also the Long X trail, and the posts are marked with a Teddy Roosevelt brand.  At each post, you can see the next post. 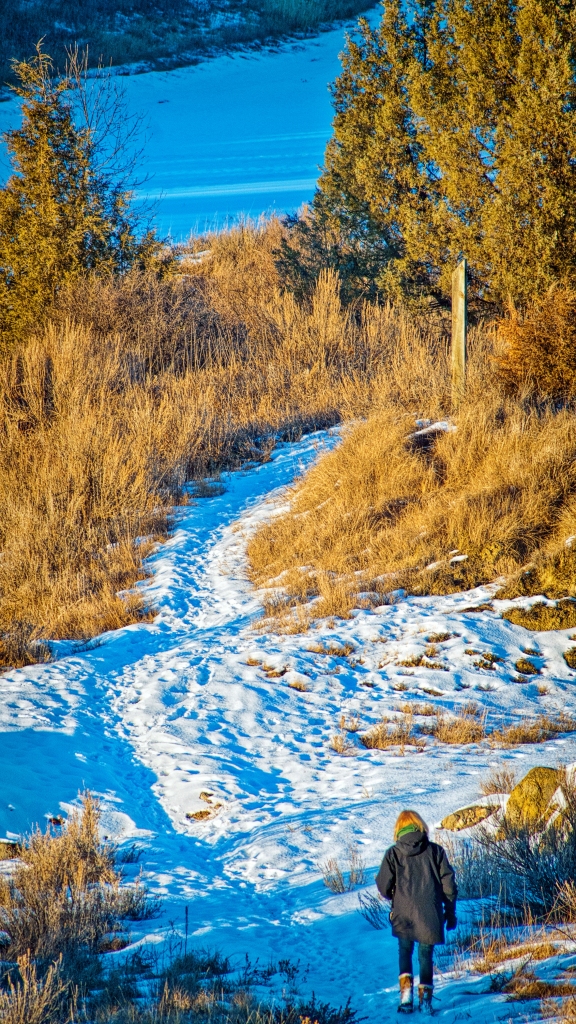 At first, the slopes rise gradually along the base of the hills.  People who hike or ski can cut across valley floors between hills and ridges.  It cuts off quite a bit of distance on the trail since it switches back and forth to maintain a relatively easy grade for bikes. Hikers and skiers can cut straight across, at least until you come to a deep ravine.

The slope is easy to navigate even in the snow or on cross country skis.

Don’t go too far. It’s easy to start the jaunt feeling fresh and invigorated by the air, the scenery, the activity. So, it’s easy to think all that initial energy will last. For every step you take along the trail, you have to repeat that step going back.  Turn around or circle back early to save your energy for the return trip.  It’s easy to overextend yourself.

We like these winter hikes because when we get done for the day we are exhilarated by the fresh air, the and exercise.  A hot meal at nearby Watford City is just 15 minutes away – and they know how to feed you there!

We’ve got more ideas for outdoor explorations and adventures. Jut subscribe. Then when a new story is posted, you’ll get a notice in your inbox to read the new story.  The subscription box is in the upper right.

1In 1934, men from Civilian Conservation Corps companies 2771 and 2772 established camps adjacent to each other on the north bank of the Little Missouri River, not far from the old U.S. 85 bridge in the area that is now part of the North Unit of Theodore Roosevelt Park.  The CCC Campground at the head of the trail is a third campsite they built. There are other sites in the Badlands built by the CCC. Company 2771 moved out after a year, but 2772 remained here until the fall of 1939 when it transferred to a site in the South Unit, and that’s why it’s called the CCC Campground.

2The trail name, “Maah Daah Hey”, comes from the Mandan Indians. In the Mandan language, one word or phrase can describe a picture, feeling, or situation. In this case, the phrase means “an area that has been or will be around for a long time.” The trail uses a turtle as the trail marker. The turtle was honored because of its firm determination, steadfastness, patience, long life, and fortitude. Here’s where to find more about the CCC Campground and the trailhead to the Long X Trail and the Maah Daah Hey trail.

Click here to read more about  the Maah Daah Hey

3 The Long X Trail represents stereotypical historical, ranch life, that of driving large herds of cattle across the country from Texas to North Dakota. This achievement was first accomplished in 1884, when, under the leadership of A. N. Jeffries, the manager of the company, a daring band of Texan cowboys piloted a monster herd of cattle from the Rio Grande to the Little Missouri River. The herd was guided by means of a compass, and reached North Dakota in September, having left Texas early in the spring. This process was repeated each year until 1897, and in this way, the grazing lands of McKenzie county were replenished by new cattle