The healing place for a soon-to-be President Teddy Roosevelt’s backyard at the Elkhorn Ranch. The house stood on the foundation blocks which are all that’s left of his ranch home

Off the beaten path – it’s exactly where Teddy Roosevelt wanted to be in 1883 – and so the Elkhorn ranch became his refuge, his healing place. He’d just suffered a string of losses, including the deaths of his wife and his mother.  To get his life back on track he went where others have gone for more than 100 years – and you can go there too, if you’re willing to get off the beaten path. The healing place for a soon-to-be President is yours to experience. 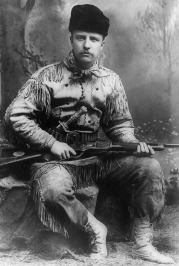 About 20 years before he became the 26th U.S. President, Roosevelt lived the life of a wilderness rancher.

To find the healing place TR called home for many years, you’ll travel more than 25 miles of gravel road through wilderness ranch area.  It’s a place of few people and many miles.  “The lives of such places were strangely cut off from the outside world,” TR wrote. “The whole region is one vast grazing country.”

To the ear, there is a great amount of peacefulness, but that does not mean quiet. Birds carry on loud conversations, particularly in the early morning and evening.  The wind itself is a sound that travels the musical octaves. In the evening, it’s the melody of the coyotes’ songs you’ll hear.

To the eye, distance and color become a stimulating visual entertainment.  When you think you can see no further in the distance, the next hill-top will unveil further horizons.  When you think you know what green looks like you’ll find more variations in the landscape – or in the autumn, brown takes on a rainbow of variations. 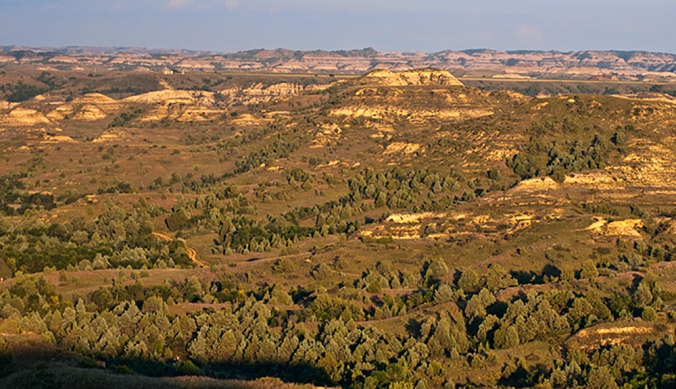 Teddy Roosevelt raised cattle, hunted and lived in these hills surrounding his Elkhorn Ranch.  A thin red ribbon shows the road to his ranch.

The Elkhorn Ranch site is a national treasure, undeveloped and barely marked. We needed a good map to find it; the U.S. Forest Service map is perfect for a search like this.  After a bit, we began to recognize the repeated Elkhorn signposts directing us further down the road. 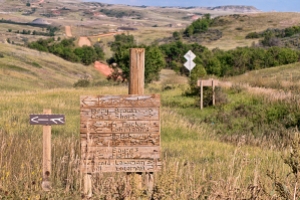 The campground up the road from the Elkhorn Ranch site offers a bit of protection from the hot Badlands sun.  Tent camping is more than sufficient with the campground’s supply of water, firewood, and privacy.  Even though we were in a public campground, it was still much like getting away from it all. In fact, one night, there were only two other campers in the campground.

To really get away from it all, a short hike up the hill to the north gave us a glimpse of the road we’d follow to get to the campground. The red scoria road winds down through the bottom ground trees to the clearing where Roosevelt set up his ranch.

The scoria road to the national landmark of Teddy Roosevelt’s Elkhorn Ranch.

The Elkhorn Ranch site is undeveloped, so it will exercise your imagination skills to envision what it was like 150 years ago.

“Just in front of the ranch veranda is a line of old cottonwoods that shade it during the fierce heats of summer, rendering it always cool and pleasant.  But a few feet beyond these trees comes the cut-off bank of the (Little Missouri) river. … The shallow stream winds as if lost.”

The Little Missouri River is a wilderness through-route today, just as it was for Roosevelt.  It is a challenge to canoe or kayak, and the spring seems to be the best time to attempt a float downstream (the river flows north), but it’s always a beautiful walk through the Badlands healing place where Roosevelt ranched. 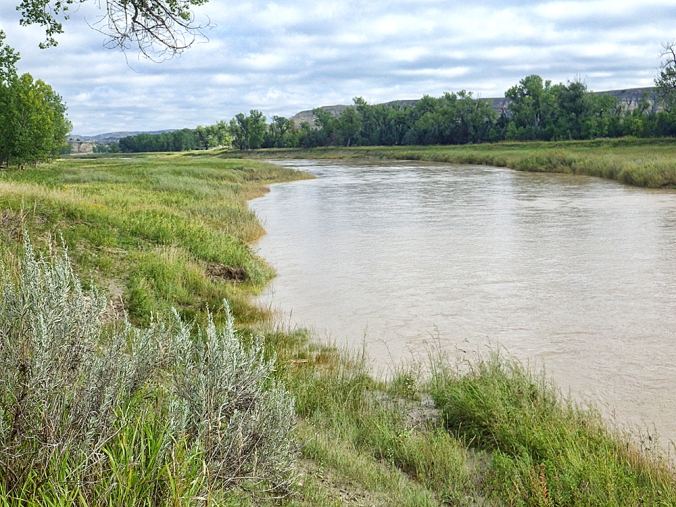 The Little Missouri River in front of the Elkhorn Ranch house.

“The stream twists down through the valley in long sweeps, leaving oval wooded bottoms, first on one side and then on the other; and in an open glade among the thick-growing timer stands the long, low house of hewn logs.”

We have hiked, canoed and driven the Little Missouri River as it flows northward from Wyoming and Montana to the confluence near Williston, North Dakota.  It’s a pleasant and non-stressful hike to follow its river banks. It’s easy to see why Roosevelt wrote often and vividly of the river.  We recommend hiking the river trails near the ranch.  Hiking the hills, bluffs, and buttes above the Elkhorn is a minimal challenge to anyone is good condition and who have hiked some of the rougher terrains further downstream.(See the post on hiking the Long X Trail along the Little Missouri River — Five reasons to use the Long X to break free of dreaded cabin fever). 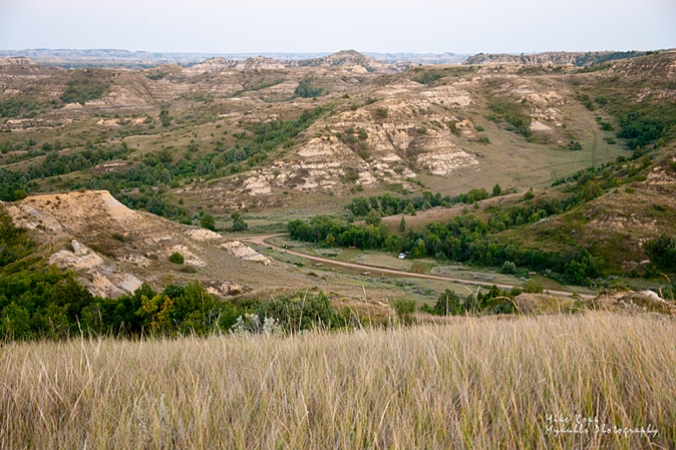 The Elkhorn Ranch campground offers shade next to the trees — a rare luxury in the nearly tree-less Badlands. The white dot along the campground road is my pickup at our campsite.

See Why it is a Healing Place

While the riverbank hike is enjoyable and calming, it’s the views from the top that exhilarates.  Not only are the views mind-numbingly expansive, but there’s a sense of accomplishment from having hiked to the top of what appears to be a unpassable slope.  The key is “switchbacks.” It’s wise to never get in a hurry when heading up to higher ground – don’t attempt to go straight up.  Follow gentle rises back and forth across the face of the hillside, pausing to not only catch your breath but to scope out the next set of switchbacks to take you to the next level.

Once at the top, you can see why Roosevelt lived here. He built his stamina and his skill at strategic thinking.  You can get a sense of the challenges he faced as an Easterner turned rancher.  When picking a trail for his cattle, or just for himself to get to Medora or Dickinson, Roosevelt planned his route. It was not easy to get anywhere.  He wrote, “The course outlies across great grassy plateaus, along knife-like ridge crests, among winding valleys and ravines, and over acres of barren, sun-scorched buttes.”

The Elkhorn ranch area is undeveloped and perhaps that’s best. It gives a visitor a chance to see Roosevelt’s nature as it was when he was here, an experience that prompted him to establish conservation measures and advance the national park system. Thanks to his time in these valleys and hills, Theodore Roosevelt became “the conservation president,” and doubled the number of sites within the National Park system. As President from 1901 to 1909, he signed legislation establishing five new national parks.

Theodore Roosevelt’s healing place, for the day-visitor it’s a moment of spiritual rest, visual stimulation, and a sense of accomplishment when you climb a hill, turn, and look back at how far you’ve come – a good life lesson.

What would it take to make you want to check out the site — accessibility? directions? time?

Make your plans to go this summer.  As I write this, it’s President’s Day today, and very cold snow conditions await if you were to visit the Elkhorn Ranch site.  You likely would have it all to yourself, the sounds would be unlike in the summer, the wildlife would be watching you, but it would be cold.

Share this article with someone who you know who would like to visit the valley this summer for a bit of “healing.”

Sign up to get a notice when the next article is ready for you to read.  With just your email address, you’ll be the first to know when a new article from the Badlands is ready for you.