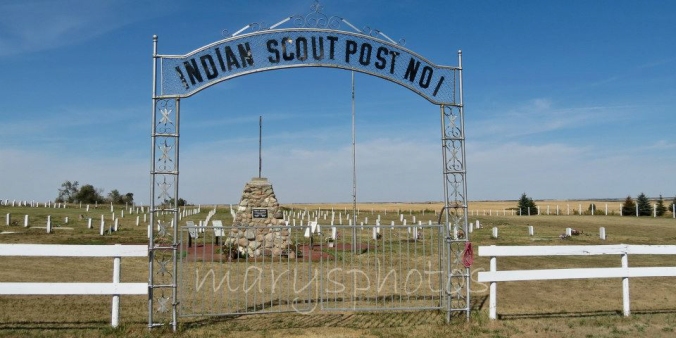 Indian Scout Post #1 on the Fort Berthold Indian Reservation between White Shield and Parshall is a nearly forgotten veteran cemetery. The Old Scout Society has kept alive the memory of the tribal members who served in the U.S. Army since the time of General Custer and are buried here at the Indian Scout Cemetery.

There’s no other place on earth like this place.  General Custer knew some of these men by name when they stood with him against the Sioux.

There is only one Old Scouts Society and this is the graveyard where the Society honors their war dead. The Indian Scout Cemetery honors members of the Three Affiliated Tribes, the Mandan, Hidatsa, and Arikara who served in the U.S. military. You can find it just outside of White Shield, west of Garrison.

Relatives leave memorials at the site of their ancestors who served in the U.S. Military.

The tradition of scouts from the Mandan, Hidatsa, and Arikara goes back nearly 200 years.  Today, the Society is a group of relatives of those historic soldiers.  They honor the U.S. Army veterans of the Indian Wars and other tribal members who served in all branches of the U.S. Military after the Indian Wars up through and including Operation Enduring Freedom and Operation Iraqi Freedom. 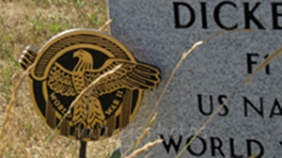 Go back to the first Hidatsa scout, Sakakawea (Hidatsa pronunciation suh-CAG-a-wee-uh).  She and her husband Charbonneau helped the Corps of Discovery find its way west and back again.

Later, when the U.S. Army occupied this region to protect the railroad expansion to the west coast, Army commanders relied on scouts from these tribes to provide intelligence about the tribe’s hostile opponents, the warriors of the Sioux Nation. The Mandan, Hidatsa and Arikara scouts carried dispatches, found food and water, tracked game and served as interpreters.

Several unrelated events converged to create the birth of the long-standing tradition of MHA tribal members joining the U.S. military.  In 1873, Colonel George Armstrong Custer and the Seventh Cavalry were stationed at Fort Lincoln, south of Mandan, North Dakota.  The Seventh Cavalry protected the Northern Pacific Railroad Survey crews who had been attacked by hostile Sioux.

A rebuilt blockhouse above Fort Lincoln marks the uppermost reach of the Fort where General Custer and his scouts once lived.

Before Custer, hostile Sioux were at war with neighboring tribes, including the Mandan, Hidatsa, and Arikara. They withstood the Sioux attacks, at first.  Then, smallpox nearly wiped out all three tribes. They banded together to defend themselves against the Sioux.  Teaming up, they formed a confederacy between the three tribes. However, it was insufficient, they were not strong enough to battle the fierce Sioux. So, they aligned themselves with the new and stronger opponents to the Sioux – the Blue Coats or the Seventh Cavalry – “the enemy of my enemy is my friend.”

At first, members of the Arikara or Ree were the principal tribe to supply scouts for Custer.  From 1872 until the late 1800’s Arikara scouts were the backbone of the Army’s scouts.

Red Bear was one of the earliest scouts. Later Boy Chief joined him and he became one of the first scouts to die in a skirmish with the Sioux while stationed at Fort Lincoln along the Missouri River south of present-day Mandan.

Bobtailed Bull, one of Custer’s favorite scouts in the Indian Wars against the Sioux is second from the left.

Boy Chief tells the story of his enlistment like this: “Bobtail Bull brought me to Fort Abraham Lincoln in 1872.  Bobtail Bull took me to headquarters to ‘touch the pen’ to my enlistment papers.  I thought the medical examination would throw me out, as I was very young.  But I passed.  In another building, an officer gave me a gun, clothing and two gray blankets.”

Bobtail Bull was one of the first Indian scouts promoted and received a commission under Lt. Col Custer. The colonel often bragged of this Arikara scout when in Washington.  Custer said of Sergeant Bobtail Bull that he was a man of good heart and good character.  He promised that if anything happened to Bobtail Bull and his fellow scouts that “their reward will not be forgotten by the government.”  That promise was broken.

It is said that a good scout who was promoted such as Bobtailed Bull, could earn more than the $13/month that was paid to most soldiers. In some cases, the scouts earned as much as $50/month.

Sgt. Bobtail Bull was one of the first under Custer to fall at Little Big Horn. That was despite the fact that Custer would not use his scouts as a fighting force except for skirmishes. Bobtail Bull, however, boasted of his experience in fighting the Sioux and stood ready for whatever battle commands Custer ordered.

Custer used the scouts to find the enemy, report their movement and act as couriers.  On the day of the Battle of Little Big Horn, Custer ordered Bobtail Bull and other scouts to “take the horses away from the Sioux camp. Take away as many horses as possible.”  Custer knew that a warrior on foot was no match for a soldier on a horse. 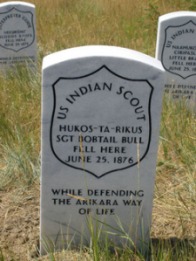 Bobtail Bull’s gravesite is at Little Big Horn, one of the few Hidatsa Scouts in a marked grave off of the Fort Berthold Indian Reservation.

Bobtail Bull got separated from the rest of the troops. Sioux warriors grouped behind him, separating him from help and from escape.  A dense swarm of Sioux rode against him and he attempted to fall back. He was left as a solitary horseman, surrounded by circling warriors.  He was shot off his horse and so became one of the first to fall at the Battle of Little Big Horn.

Bobtail Bull, Red Bear, Boy Chief and other scouts in the U.S. Army from 1866 to 1914, served with fidelity, placing their unique skills at the disposal of the frontier army.  To the shame of the U.S. Government, many of these brave soldiers were harshly treated after they served the U.S. Army.  For some, prison, poor health, disabilities or even death was the future they faced after serving the United States.  Many have been completely forgotten.  After the Indian Wars, some of the Arikara scouts were arrested and confined in the same space as the Sioux whom they had fought against.

In 1979 the Old Scouts Society of White Shield was established. The group cares for and maintains Post #1 Cemetery at White Shield where several of the scouts of the Seventh Cavalry are buried alongside veterans of WWI, WWII, Korea and Vietnam.

In 1983, the Fort McKeen Detachment, Old Scouts Society was officially formed. Organizers included the grandsons of Bears Belly who was one of the original scouts who served under Custer at Fort Lincoln.

The Fort McKeen Detachment of the Old Scouts Society is dedicated to correcting misconceptions about the scouts who served in the U.S. Army.  Members educate the public about the military scouts and work to keep alive the stories of how the historic scouts influenced American and North Dakota history.  They work to preserve and honor the gravesites of the scouts buried at Fort Abraham Lincoln south of Mandan.  They also help maintain the Old Scouts Cemetery west of Garrison on Highway 1804. 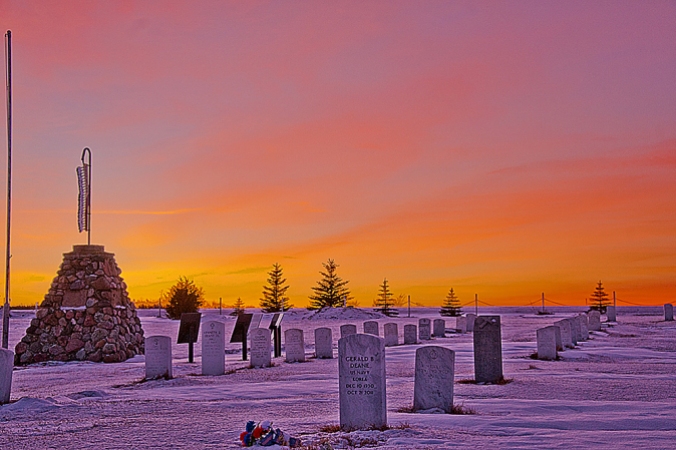 Cemeteries Carry strange stories of the past

Many cemeteries dot the Badlands, as you can read by clicking here.

As often as possible, I go past the Old Scouts Cemetery, usually on a motorcycle. I tend to fallen flags and other markers left to honor this group of war dead. They contributed much but received so little recognition for their sacrifice.

(This article is excerpted from a script I wrote for a documentary on the Old Scouts Society — yet unproduced. It is the product of months of research at the Fort Berthold Library, the Three Affiliated Tribes Museum and the North Dakota State Historical Society.)

Follow tales of Western North Dakota Travel by adding your email in the top right of this page to get alerted when new stories are published.