A short history of Longhorns on the Long X trail — part 2, the Civil War 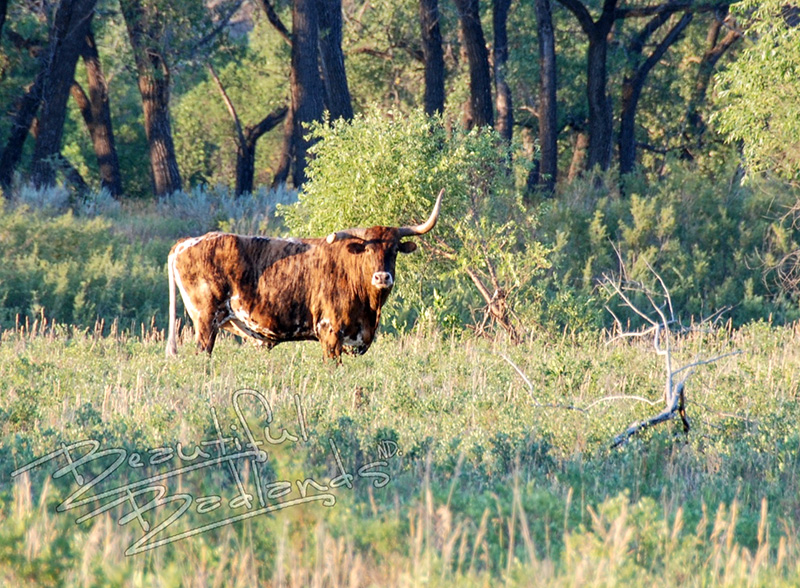 Thanks to the War Between the States

North Dakota almost escaped the War Between the States, but following the war, North Dakota benefitted from the lingering conflicts in Texas, Missouri, and Kansas. 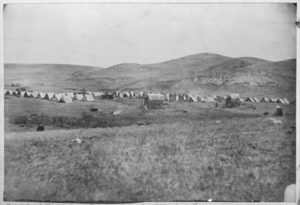 During the War Between the States, General Sully’s Union Troops camped near Fort Berthold to stand against hostile Sioux. Many of the members of the Three Affiliated Tribes, Mandan, Hidatsa, and Arikara served in the U.S. Cavalry in battles against the Sioux. 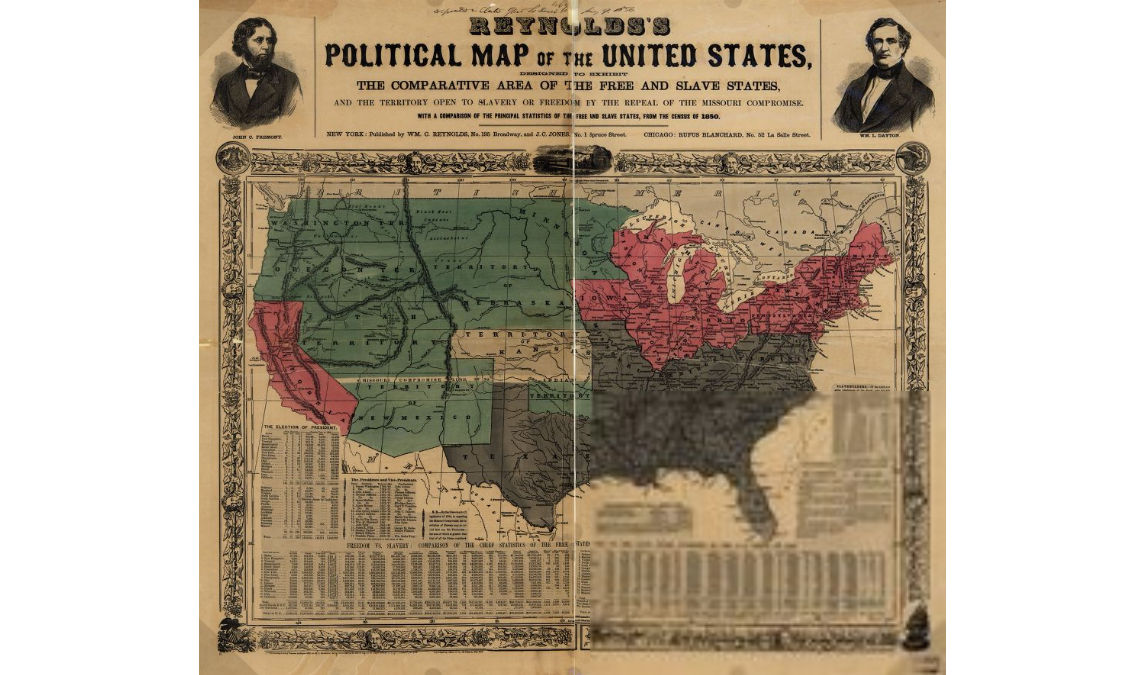 Political map of the United States from the Library of Congress

Few people settled in North Dakota compared to the growing populations of Texas and other southern agriculture states. North Dakota escaped the mess of reconstruction, but it indirectly benefitted. Those destructive war years of heartbreak emptied out the working population of many southern states such as Texas.  Ranches went untended, women folk packed up and moved to town. Livestock broke free and roamed the tall sagebrush plains of Texas.  And so, the longhorn breed of cattle that were once feral returned to their range-fed freedom.  These were cattle that had originally come from Asia, according to DNA tests.  They’d been brought to Mexico by Spaniards, moved north and ended up roaming free.

After the Civil War

After the Civil War ended, much of the nation, but especially Texas went through many social and economic changes.  Displaced confederate soldiers wandered west to Texas, looking for work, some legitimate, some not so legitimate.  All who survived the post-Civil war life in Texas, outlaws or not,  developed a hardcore personality – good for handling longhorn cattle.

One of the lasting effects of the war was the disruption of food to the heavily populated Union states of the Northeast.  The war destroyed the cattle industry in the East and there was a massive influx of immigrants into the East Coast cities. People needed a new source of meat (cattle).  Union blockades during and after the Civil War and the destruction of southern rail lines prevented Texas cattlemen from moving beef to beef-hungry population centers and packing plants in Chicago.  So, they had to find a way around the blockades and reach the rail lines that could haul their beef to the east. 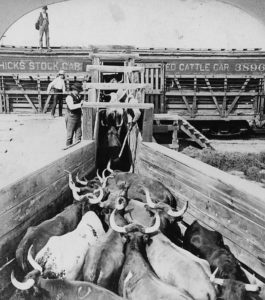 Longhorn cattle from Texas, to North Dakota, were shipped to stockyards in Chicago after the Civil War.

Immediately following the War Between the States, railroads expanded to Kansas and Wyoming.  To get their cattle to market, Texas cattle companies trailed their cattle north to a rail point so they could ship their cattle to eastern markets. Later, when railroads reached west Texas, the need for mass herds of cattle driven to rail lines in the north diminished.

Cattle cars like this in 1870 rode the rail lines between Kansas and Chicago, then between North Dakota and Chicago hauling beef.

However, before railroads caught up to population expansion, cowboys improvised and adapted. Enterprising cowboys rounded up wild Longhorns. With good business plans, they herded them north in the spring to follow the greening of the grass.  Beginning in April and continuing until September, millions of Longhorn cattle moved north to North Dakota, Montana, Wyoming, and Kansas. There were no fences, no barbed wire, no property lines, no public land to avoid; herds were free to roam northward. And that’s how longhorns moved north on the Long X trail. 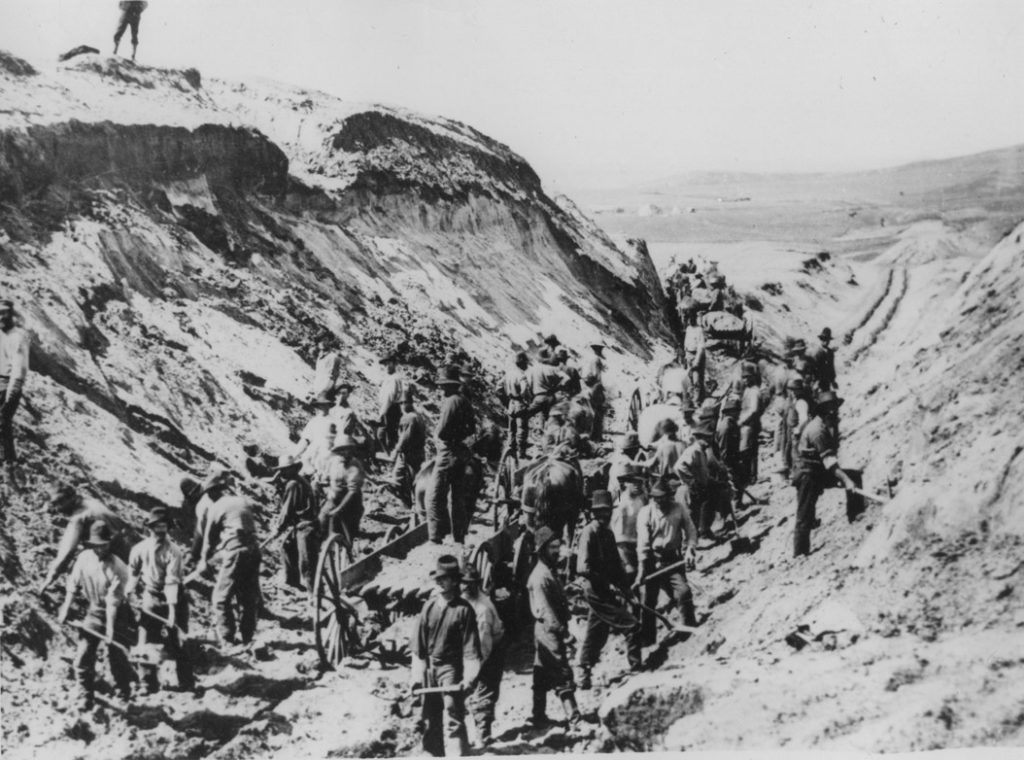 West of the Missouri River, near Sweet Briar, workers hollow out a hill for the Northern Pacific Rail line. The west river section was built early enough to handle the soon to come rail shipments of cattle. 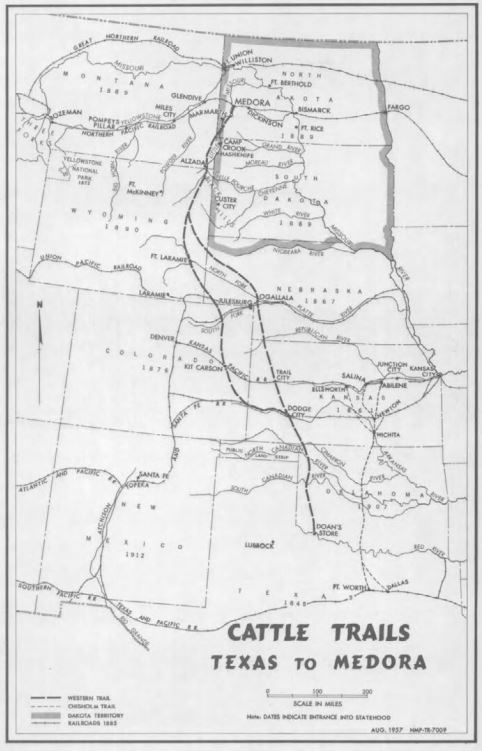 The National Park Service and the Interior Department published this map in 1958 in the book Theodore Roosevelt and the Badlands.

The Long X Cattle Company, west of Dallas was a brilliant economic venture by the Reynolds Brothers. They established Long X ranches in New Mexico, Arizona, Montana and North Dakota – the destination points for the longhorn cattle drives.

Good timing and bad men made it possible for the Reynolds to buy a ranch south of Watford City, north of Grassy Butte along the Little Missouri River. 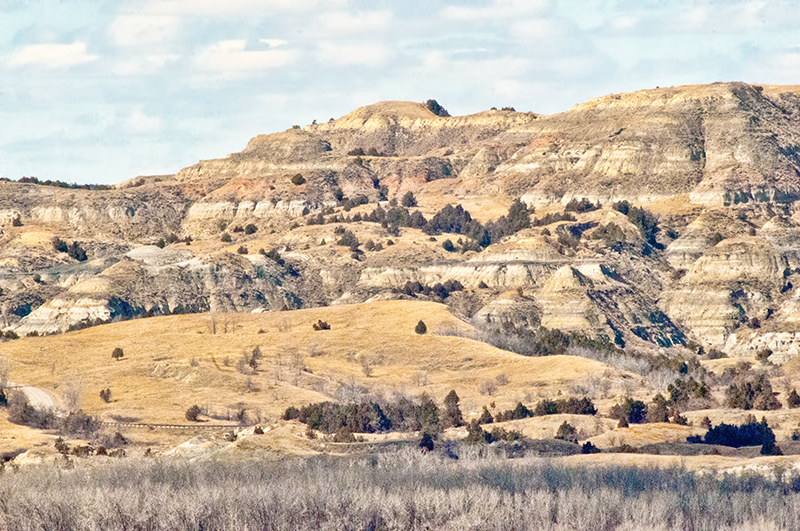 The Long X ranch was in this valley that is now the North Unit of the Theodore Roosevelt National Park.

When the Reynolds, in turn, lost their ranch they turned it over to a mismanaged company from Boston.  That Boston cattle company lost money on the ranch and gave it up for sale  After a while, the Long X Ranch with its stellar history of cattle production was gone from North Dakota, and in its place was the Theodore Roosevelt National Memorial Park.  It was designed to extend as one unit from Watford City to Medora and developed to accommodate horseback tours and trips.   The Long X Ranch was to be part of that huge national park.  But plans changed.  And that’s why there are Longhorn cattle at the North Unit, not in the South Unit.

Longhorn Cattle move out to the Little Missouri River from the North Unit if the TRNP where 140 years ago, the Long X ranch ran as many as 11,000 of Longhorns.

What happened next is Part 3 of this Short History of Longhorns on the Long X Trail.

Here’s Part 1.  Add your email to get a notice of when Part 3 is posted in February. The subscription box is on the upper right.