See how it rots, an Elegant railcar at Blaisdell — Then and Now

Several years ago, we investigated a site along Highway 2, west of Minot, North Dakota.  It took some digging and neighborly visiting to get the story of the Northern Pacific, later a Great Northern railcar, rotting away in a gravel pit.  Here’s the story as we ran it in 2015.

A wooden passenger rail car once carried passengers across the U.S in a marketing effort for the rail company to promote tourism, now it marks its decay in to the prairie.

Have you seen a Great Northern railcar along Highway 2 west of Minot?

Once again as we’ve done so often in recent months, we’re headed down Highway 2. We eyeballed the rail car in the middle of the gravel pit.  It was so out-of-place that we mentally marked its location between Minot and Williston.  Each time we passed it, our curiosity grew.  We apparently were not the only ones.

After we posted an image on our Facebook page,  we got an overwhelming response from people wanting to know more.  A few chipped in what they knew of the steel-wheel reminder of another era.  Our search yielded very little, not much online.

Robert showed us his photo of how the wooden rail car may have been similar to this.

“Wait a minute,” I said, “I know a guy.” One or two lifetimes ago I had met Fred back when I was a local weekly newspaper editor.  So, I called him, and he knew exactly what I was talking about.  He gave me a name and that’s where the search started.  From that name, I got another name, and from that name a third name, name after name, I finally got to the owner, Robert.  He seemed like a nice enough guy talking to him on the phone, so I asked to meet with him to get more information on the car.  “Yeah, I’ll meetcha on Monday.  I’ll bring my briefcase.”

Briefcase?  What had we gotten in to?  Were we about to go head to head with some high-powered negotiator who kept his life in his briefcase?

We knew where we were going, we just didn’t know how to get there.  We followed his directions and the snow tracks in to the farm-yard, past the house to where a pickup truck was parked outside a large metal farm shop.  That was about as good a sign as any that the man with the briefcase was nearby.

The shop door was locked.  I called him on the phone and after a couple of minutes, he unlocked the door from inside.   Were we about to meet the high-powered negotiator with a briefcase?  Were we going to need an attorney? A high priced team of negotiators?  A hitman?

No. Robert was anything but; in his late 60’s, smiling, charming, a bit of a silver ponytail under his cowboy hat.

Robert met us with a warm casual greeting.  “Hi, there! C’mon in!”  He held the door open, we made introductions and he ushered us through a large shop building that most farmers would be glad to have. Equipment parked neatly in the dark room on the dirt floor.   “Go on back,” he said and we threaded our way to another door on the back wall.  We had just been in the foyer. We got back in to his brightly lit, clean and colorful domain. 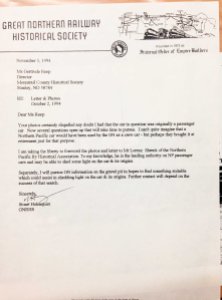 Here, an extra-large shop housed a wooden cook wagon for a cattle drive, an old John Deere, an old Ford tractor and an endless selection of well-organized memorabilia extending as far as the eye could see in his shop – and a couple of recliners next to a table.  This was Robert’s “office.”

He opened the briefcase, and out came the goods.  He had it all.  “Here’s a letter to the railroad history group,” he started.  “Here are stories, and here is a diagram.”

The original layout and design of the wooden rail car.

Robert told us how the spur started up a slope to the north and the rail company could let cars roll back in to the gravel pit, then load them before being pulled out by an engine.  He said that was how the fancy wooden passenger car got into the gravel pit.  Then later, a crane lifted it off the tracks, set it on the ground to become a bunkhouse and office — from 1st class passenger car to gravel pit bunkhouse. He said, “The Mountrail County Historical Association wanted to move it to Flickertail Village in Stanley.”

From the Big Sky Journal. How this car was included in the touring trains to Yellowstone allowed passengers to go to the rear to watch the scenery from a covered rail car. http://bigskyjournal.com/trains-of-discovery/

The drawings and illustrations showed the car at one time was quite ornate.  “Yeah, it had stained glass windows and a lot of fancy work on it, but vandals got in there and broke all the glass and pretty well tore it up,” he said.

The long windows on top and the arched windows in the side were stained glass.

“Senseless,” we shook our heads.  “Why do people destroy things like that?”

The interior bears the marks of vandals and weather.

Robert is a good conversationalist, good to talk to. He took us back in time to show us his restored antiques and rare collectibles, including brass hinges and door knobs.  He’s a collector and a wealth of regional history – a wealth to uncover with patience and time.

However, we were on our way to Williston and couldn’t spend much time with him, so we made a disappointing departure – our disappointment because Robert is a rare life-long fixture of the prairies.  We told him, we’d like to come back and he said that would be good.

He had given us a start. From the newspaper stories of years ago, the drawings and letters, we learned enough about the rail car to hunt for more information online.

Just as Robert had said, Barney and Smith Company of Dayton, Ohio built the car in 1906.

The company started 70 years earlier, before the Civil War by two men who met at a local Baptist Church in the 1840’s.   They built rail cars and eventually inner-city trolleys.

1900 Northern Pacific Rail lines from Minneapolis west. Map is from the Library of Congress.

The Great Northern railcar, parked along Highway 2 in Mountrail County, North Dakota had been all over the upper Midwest pulled by the Northern Pacific rail company before selling it to the Great Northern Railway.

A similar car carried Teddy Roosevelt through Fargo in 1912

The N.P. built the line through southern North Dakota and Montana, from Fargo, Bismarck and on to Billings and west.  It invested heavily in a new idea called “Yellowstone Park” and helped pay for the Old Faithful Inn in Yellowstone.  N.P recovered its investment by promoting tourist trains from the east, across the prairies to the Rockies and to Yellowstone National Park.  Tourists paid to travel by N.P. rail for a day or two to get to near Billings, and then take an N.P. spur to Yellowstone. The gravel pit rail car was likely one of the cars the N.P. used to carry passengers.

The Northern Pacific built the rail line through southern ND and MT, built and promoted Old Faithful Inn at Yellowstone, then attracted tourists to ride the line to near Billings and then to Yellowstone.

The G.N. used the gravel for rail beds until it became apparent that the gravel in the pit was too smooth and round; a sharper-edged granite was needed.  The G.N.. abandoned the site in 1958, pulled up the tracks, but left the rail car.  The Mountrail County Historical Society floated the idea of moving the car to the Flickertail Village in Stanley, but when the group learned the car had no wheels, it abandoned the plans, and the car was left to rot.

The patina of the wood on this rail car is tremendous. What craftsmanship to build such a structure.

Robert gave us permission to check out the rail car when we got the chance. Vandals and thieves have stripped the car of most of its detail unless you look very closely.

We found it wasn’t hard to imagine the stately high-end decor of the car.   It has a spirit about it, a feel that causes a visitor to slip into a romantic nostalgia of another era. 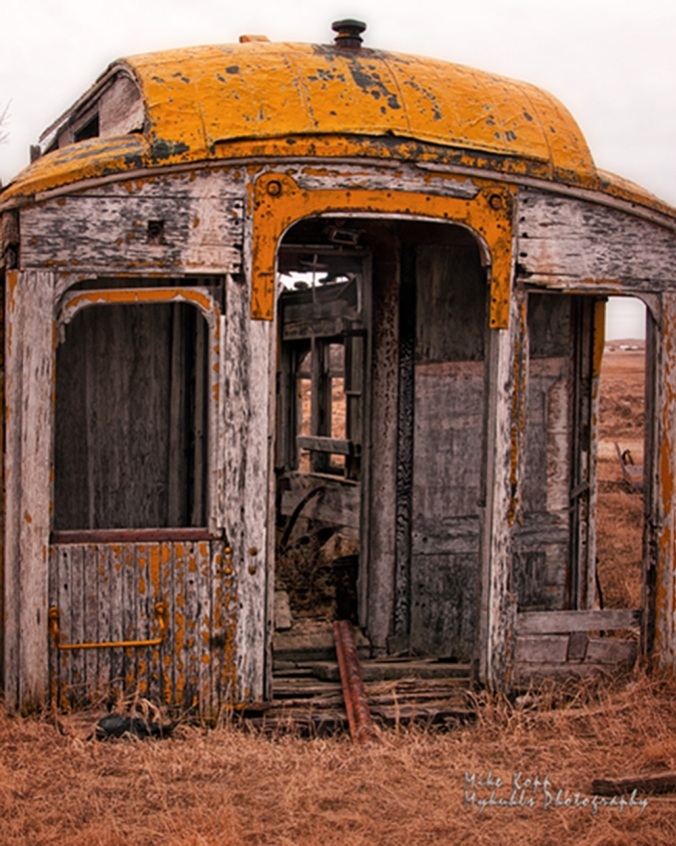 Imagine standing on the porch of the rail car, traveling across the Midwest to Yellowstone at about 40 mph.

It’s an impressive structure, about 70-feet long, but I don’t think I’d trust the floor or the walls.  Weather has done its thing for the last half-century. It wasn’t difficult to imagine standing on the back deck and watch the woodlands of Minnesota turn into prairies of eastern North Dakota, and then the ruggedness of the Badlands and finally the kingly Rocky Mountains. 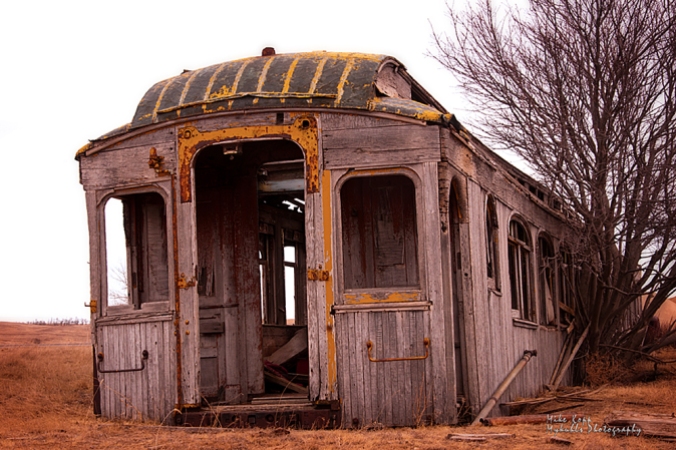 Our few minutes with a Great Northern railcar would have been longer if it were not so cold and windy.  We shot around the car from different angles.  It’s a horizontal monolith of the prairie.  It’s a reminder that today’s industry in the Badlands of North Dakota, the Bakken is not a new phenomenon, that the region has been home to different industrial enterprises for decades.  Wooden rail cars dot the prairie as farmers converted them to shops and storage space.

Here is another railroad Then and Now story from Beautiful Badlands ND.

Another Then and Now story from the region.

Here are links to tell you more about the golden days of railroading to Yellowstone:

Here’s a restoration project of a similar rail car is underway. Check out the detail here — much like what would have been in this rotting rail car.

Help us out. We’d like to find more, are there any near you?  What can you tell us about the abandoned rail cars in your part of North Dakota?

Here’s the order blank to let us know where to send the resource guide.  It’s an attractive guide with the information and links you need to stay up to speed on events and activities in Western North Dakota and Eastern Montana.

Headed to Western ND? Find out what’s going on.

Here are 10 free resources we use to find schedules and calendars. The eResouce is yours free.  Just tell us where to send it

10 easy-to-click resources you can use to stay up to date on events in the region. Click here to get it

Some of the photos can be found at this collection of Badlands photographs.

Subscribe to Beautiful Badlands ND to get a notice in your email inbox when a new article is posted.