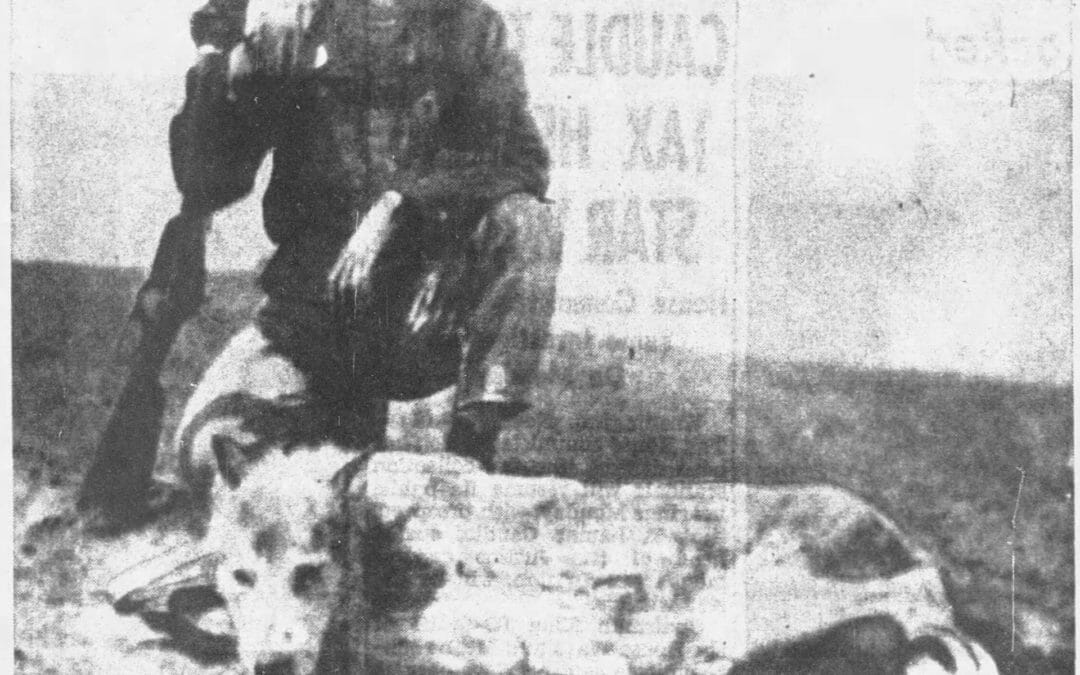 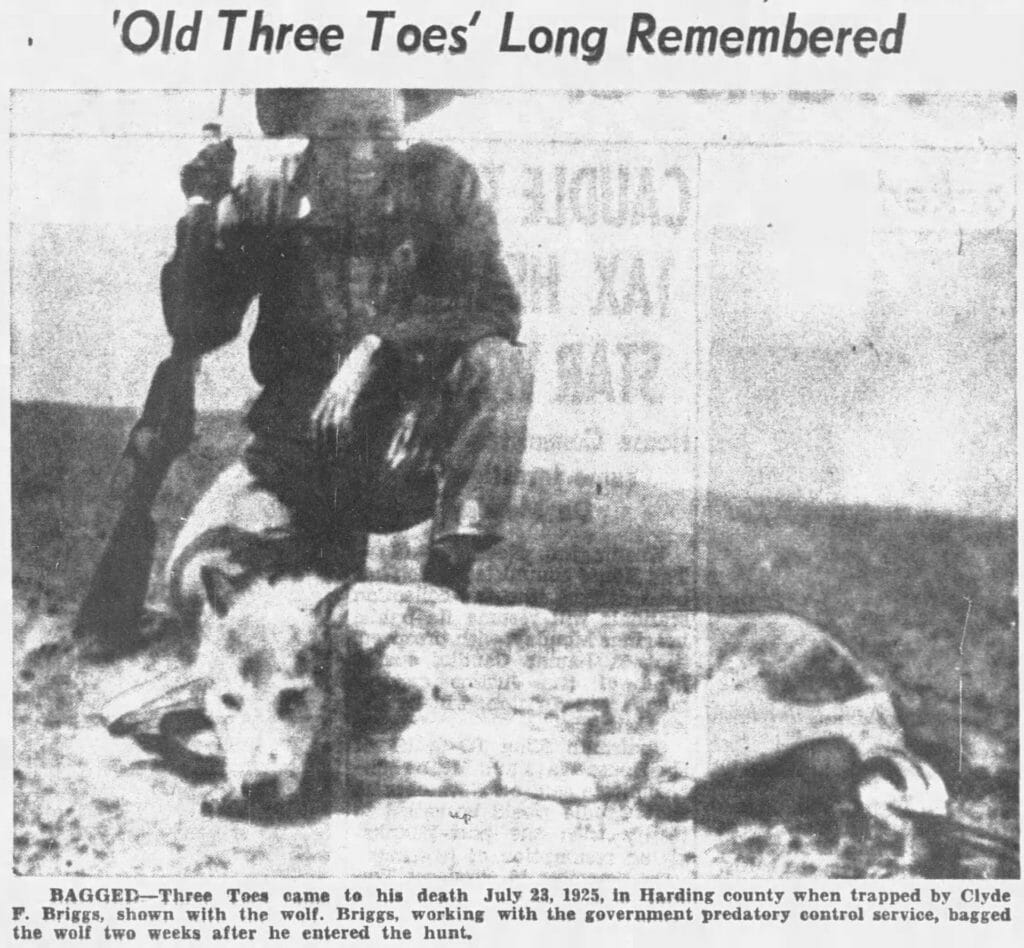 The Little Missouri River – ranging northward some 560 miles from its source in Wyoming, through Montana and South Dakota, to its rendezvous with the Big Missouri in North Dakota – has seen its share of history and drama.  A number of outlaws have crossed its muddy waters, but one stands out as exceptional.

This solitary fugitive roamed at will for most of two decades, living off the land, raiding ranches occasionally, outwitting and eluding countless pursuers over hundreds of miles of prairie and badlands.  Many hundreds of dead victims marked his trail, and finally, a reward of $500 was offered for his body, dead or alive.

He was known as Three Toes, gaining that name from wounds suffered early in life when traps took three of his toes.  He was a Buffalo Wolf, a subspecies of Gray Wolf now extinct.  He was born about 1907, probably in the area north of Camp Crook, SD, which he seemed to favor.  His wide territory, however, also extended into Montana and North Dakota.

He lived to kill

His tell-tale tracks and destructive habits soon gained him an immense reputation.  He did not kill merely to eat, but would also kill dozens of penned sheep, leaving their bodies to bloat.  He also brought down cattle and horses.  He seemed to be exacting revenge upon the culture that had maimed him.

The legend of Three Toes took on supernatural qualities.  Coyotes shadowed the Wolf King to feast on his abandoned kills.  It was said he was immune to poison baits; that bullets could not kill him.  In escaping from pursuing dogs he had once jumped up a 12-foot sheer cliff, and another time he had leaped over a 30-foot chasm.  Eventually, it was estimated that Three Toes had cost regional stockgrowers at least $50,000, in a time when a dollar meant something.

How to catch a Monster?  Call a Monster Hunter.

Clyde F. Briggs of New Mexico, an Inspector for the Biological Survey of the U. S. Department of Agriculture, was preceded by his reputation as being able to catch “uncatchable” predators.  Briggs arrived in Harding County, SD on July 6, 1925, and immediately immersed himself in Three Toes lore.  Recent tracks were found, and Briggs took the trail.

It took nearly three weeks, but Briggs caught the phantom marauder.  He and two companions were running his trap line in a touring car on July 23 when they came upon their catch.  Three Toes had triggered a cleverly disguised main trap with a front foot and then a hind leg snagged a secondary trap.  He had fought to exhaustion in his attempt to free himself, but Briggs had secured his traps well.  The prisoner still lived but his spirit was broken.  He would not even acknowledge his conqueror but remained limp and docile as Briggs approached. 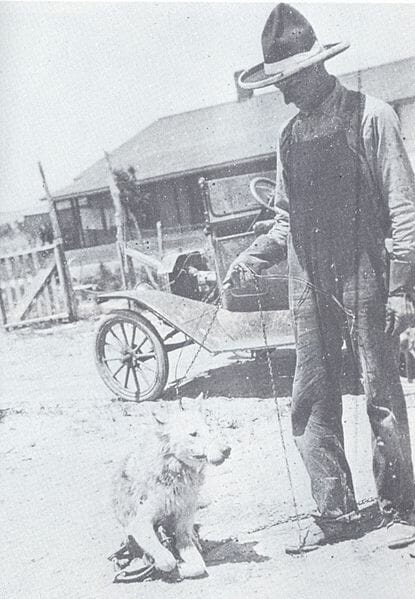 Shortly after capturing Three Toes. The wolf appears docile as though he surrendered. By Edward Alphonso Goldman (The Wolves of North America, Vol. I) [Public domain], via Wikimedia Commons

Three Toes was showing his age; he was past his prime and weighed just 74 pounds despite being six feet from nose to tail.  Briggs now decided to take his worthy foe in alive.  With his jaws secured, Three Toes was loaded bodily into the back seat of the touring car, traps and all, and the car began its triumphant journey to county seat Buffalo.  When they checked on their passenger a few miles later, however, they found his eyes dull and lifeless.  Three Toes had escaped yet again, back to the hills he had called home.

You can read more about Three Toes here. 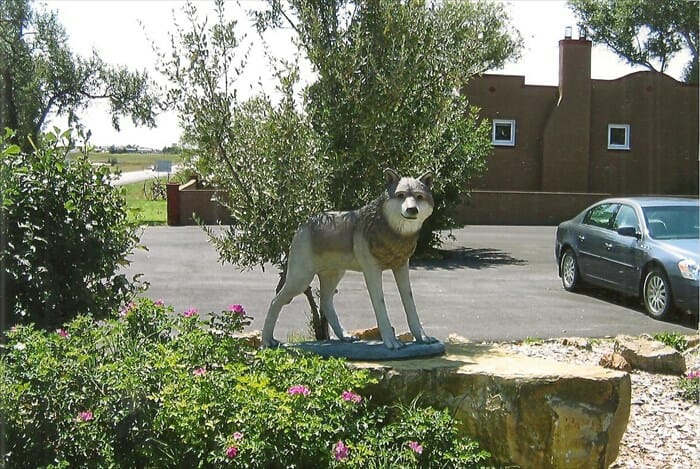 Just off of Highway 85 at Buffalo, South Dakota is a statue reminding people of the ruthless Three Toes and his rule over the region.

Medora’s Doug Ellison is a wealth of Badlands history. You can find him at his store, The Western Edge Bookstore in Medora where he will gladly take the time to answer your questions and tell you stories of the Real Wild West

More from Doug Ellison about the bison of the badlands can be found here.

You can drive through the region where Three Toes left his bloody carcasses.

Subscribe to get a note in your email inbox when a new article is posted.